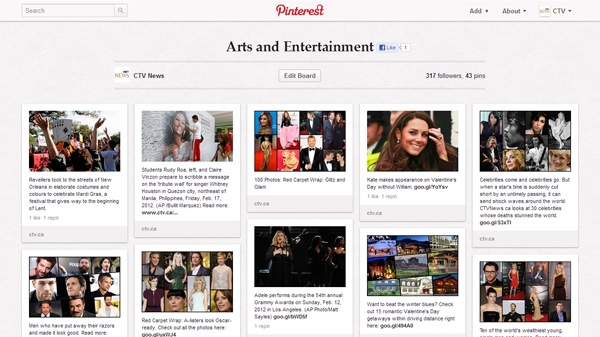 Businesses, entrepreneurs, television news shows, websites such as CTVNews.ca, and a ton of ordinary people are signing up for the latest social media service that essentially allows people to create digital public scrapbooks of the things they like.

People are pinning everything from a lusted-after pair of heels or an artsy chandelier made from deer antlers, to a new book they like or a future vacation destination.

What was a few months ago a fringe service that few people had heard about, has now suddenly rocketed into the mainstream with people and organizations jumping in with both feet.

In fact, Pinterest suddenly has more than 12 million monthly visits, with membership growing exponentially every day. And according to estimates, Pinterest users are largely composed of women, a group the founders initially targeted as a key demographic.

That has prompted one Washington Post writer to describe the service as "crack for women."

And it's true, Pinterest is brimming with images of cute dresses, powder rooms, cupcakes, and other somewhat girly items.

But that's changing as the service reaches a tipping point and begins to attract a broader demographic, says Mark Evans, a technology expert and consultant who specializes in marketing for Internet startups.

"I think what's interesting is that from a strong base of women it's starting to branch out and we haven't seen that with a lot of other social networks," Evans told CTVNews.ca.

"I think a lot of men are going to gravitate towards it because you can use it for anything -- sports, travel, beer or anything you might be interested in."

How does it work?

In basic terms -- and at its core the concept is very, very basic -- Pinterest is a digital scrapbook that allows users to create collections of collections.

"As you travel across the Web and you see images and photographs and graphics and video you like, you pin them and put them on that relevant scrapbook or the board you've create," Evans said.

"It's really easy and I think that's one of the most compelling parts of Pinterest. It's very user-friendly, it's very easy to get the concept, it's fun, and the barriers to entry are very low... And I think that's a lot of the reason why it's caught fire in the last couple of months."

But is Pinterest anything more than the social media flavour of the month? Let's be honest, Facebook is clearly still the frontrunner social service for more than 845 million users, Twitter is a close second with 300 million tweeters, and then there's Tumblr, Flickr, YouTube and a host of others that have seen their popularity rise and fall in recent years.

Is Pinterest any different, and why should we care enough to join yet another social media service to distract us from real life?

Evans says Pinterest offers something new, primarily because it's easier to join than most other services and requires less commitment. But it will still take time to win people over and it's a given that they could jump ship as soon as the next great service comes along.

"I think there is some skepticism because it's like 'great, another social media service,'" he said.

"I found myself in that camp and then I scratched a bit beneath the service and thought 'Hey, this is not bad.' I'm not sure it's going to become my go-to service but still I can definitely find value in using it."

Pinterest does have its challenges. Much like other services that have experienced rapid growth (Twitter and the iPhone Instagram app come to mind), the company will have to quickly boost its infrastructure and achieve the capacity to host millions of videos, pictures and graphics.

Copyright is another major issue for Pinterest to deal with. So far it's very much a grey area. While the company recently introduced technology to allow companies to block their images from being pinned, the vast majority of pictures on Pinterest are pinned by people who don't have any copyright permission to do so. No one's really sure yet whether or not that's OK.

Users have also complained about the overly-basic format for comments. If you pin a picture of a new car you're thinking of buying, for example, your caption will appear as one long line of text, regardless of how many words you use. There is no option for paragraph breaks, bullets or subheads, so lengthy descriptions get really clunky, really fast.

There are also the rough edges when it comes to the social aspect of Pinterest, with users griping that it's tricky to find out who has repinned your pins.

Also, if you're the original author of a pin, you don't always get credit because people who click on a repinned version aren't immediately bounced to the original pin. This bothers businesses that want to drive traffic back to their sites.

And finally, there are concerns about the monetization of Pinterest. Will it come in the form of ads, or embedded affiliate codes that give the company a commission every time a product is purchased after the customer found it on Pinterest? No one is sure.

However, the bottom line is that the benefits the service provides far outweigh the concerns mentioned above, says Evans.

Social media has changed the way we feel about our private lives and the way we interact with others. And Pinterest is just the latest evolution in that process.

"When you think about all the sharing we do on Facebook, on Twitter, on our blogs, you realize we live in a sharing economy and that's the way we like to experience or share the world these days -- by letting other people know about our interests and maybe exposing them to things they maybe wouldn't know about otherwise."