Is climate change playing a role in extreme weather? 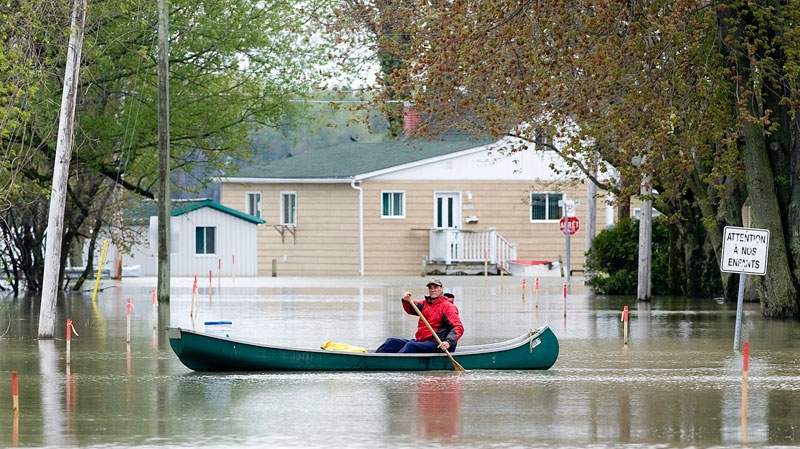 A man paddles canoe through a flooded street in the town of St-Blaise, Que., Tuesday, May 17, 2011. (Graham Hughes / THE CANADIAN PRESS)

The tornadoes to hit Joplin, Missouri, are just the latest in a series of extreme weather outbreaks around the world. Even here in Canada, wildfires, torrential rain and flooding have been devastating communities.

So what's behind this rash of extreme weather and is it a sign of a changing climate?

Environment Canada's David Phillips says there is certainly an element of climate change in all these weather disasters, but that doesn't tell the whole story.

With all these record-breaking weather events of late, he said it's understandable that we would wonder whether there is something larger and darker at play.

"We hear about climate change, about how it's supposed to create more extreme weather, more volatility, chaotic kind of conditions," Philips told CTV's Canada AM from Barrie, Ont.

"On the other hand, it's quite a leap to go from something that's global to something happening in our neighbourhood."

The forest fires in northern Alberta, for example, would likely not have happened without the help of climate change. The northern pine beetle was allowed to move into areas of northern Alberta it had never been to before due to climate change, killing off trees and leaving hectare upon hectare of dead forest in its wake.

The regions had also seen several seasons of dry weather there, and climate change experts have long predicted that would result in forests that are hotter and drier.

"So clearly, there's a climate change element there. But at the same time, if the weather hadn't cooperated, if it hadn't been the kind of weather it was on May 15, with the strong southerly winds and bone-dry desert kind of conditions, we wouldn't have seen the kind of fire that took place," Philips said.

There's an element of climate change in the tornadoes hitting the U.S. South and Midwest.

"What we've seen are warmer temperatures creating more energetic weather systems," said Philips. "But at the same time, (we've seen) some bad luck and some perfect weather coming together to produce the violent storms."

Quebec too has had its share of bad luck missed with the effects of climate change, with tons of snow in the Adirondacks and the wettest spring on record in southern Quebec leading to the flooding in the region this spring.

These extremes of drought and intense precipitation, the wild swings back and forth, are markers of climate change too, Philips said.

"So I think what we should do is pay attention to the fact that we are probably seeing greater variability, and the potential for more extremes. And then we can better prepare ourselves for it.

"We're at greater risk and we have to learn to live better with the climate that we've got," he said.