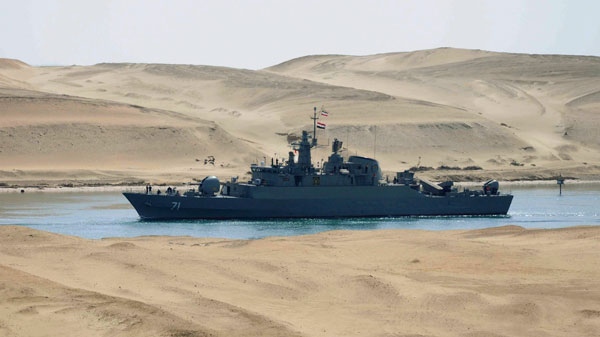 Canal officials said the ships -- a frigate and a supply vessel -- had reached the Mediterranean Sea by about 4 p.m. local time.

Israel saw the passage as a provocation. Israeli officials refused to comment Tuesday, though earlier this week Prime Minister Benjamin Netanyahu said he viewed the move "with gravity."

The canal linking the Red Sea and the Mediterranean enables ships to avoid a lengthy sail around Africa. The Iranian ships are headed for a training mission in Syria, a close ally of Iran's hard-line Islamic rulers and an arch foe of Israel. In Syria, officials at the Iranian embassy said it would mark the first time in years that Iranian naval vessels dock in a Syrian port.

The ships paid about $300,000 in fees for the passage, according to a Maritime agent. The officials all spoke on condition of anonymity because they weren't authorized to speak publicly about the matter.

Iran's request to send the warships through the Suez Canal came at a particularly difficult time for Egypt as the nation's new military rulers try to focus on pressing domestic issues, including restoring security after the uprising that ousted longtime leader Hosni Mubarak.

The military rulers apparently had no choice but to grant the ships passage because an international convention regulating shipping says the canal must be open "to every vessel of commerce or of war." Egypt also cannot search naval ships passing through the waterway.

Iranian warships have not passed through the Suez Canal since the 1979 Islamic Revolution.

Egyptian-Iranian ties broke down following the Islamic Revolution and the signing of the Israeli-Egyptian peace treaty the same year. Later, the relationship improved slightly, with contacts currently channeled through interest sections in the two capitals.