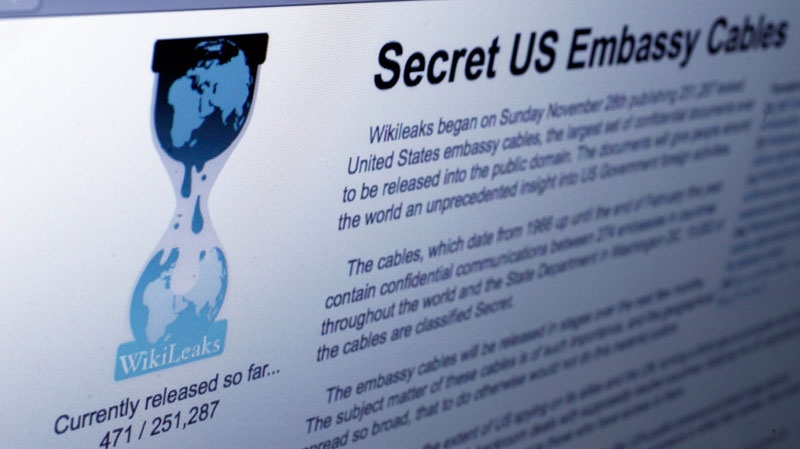 The Internet homepage of Wikileaks is shown in this photo taken in New York, Wednesday, Dec. 1, 2010. (AP / Richard Drew)

VANCOUVER - American politicians have long believed that Canada is a gateway for illegal immigrants wanting to get into their country, but an internal U.S. consular memo suggests the gate may be swinging the other way.

A cable released recently by online whistleblower Wikileaks says immigrants are living illegally for several years in the U.S. first, and then crossing into Canada and trying to fraudulently gain legal status in Vancouver.

U.S. consul in Vancouver Phillip Chicola wrote to the White House that immigrants show up in Canada with new passports and different names to cover up previous orders of removal or unlawful presence in America.

"There continues to be incidences where applicants try to cover up prior orders of removal or unlawful presence in the U.S.," Chicola wrote in the Feb. 23, 2010 cable. "Usually, these applicants have only recently arrived in Canada to seek legal status after residing unlawfully in the U.S. for years."

In addition to standard identification systems, he adds, an illegal immigrant's American regional accent or better-than-average English will give away the fact that they have been living in the U.S. for a long time.

Authorities in both countries have long referred to their boundary as being the longest unfortified border in the world. But U.S. officials have previously accused Canada of being an easy stepping stone for illegal aliens to get into the U.S.

Don DeVoretz, an observer of immigration issues and economics professor at B.C.'s Simon Fraser University, says it's ironic that illegal aliens are using the U.S. as a "way station" to get into Canada.

"It's just usually thought the other way around," DeVoretz said in an interview. "Americans think of it as terrorists waiting at their back door."

The diplomatic cable goes on to note that H-1B visa fraud is the most notable category detected in Vancouver and Calgary, during the reporting period of February 2010. The H-1B is a temporary worker visa for highly education people in speciality occupations, such as engineering, computer science or medicine.

These cases have decreased in Vancouver since the last reporting period, Chicola said, and Calgary officers continue to "work aggressively" to identify possible H-1B fraud cases.

DeVoretz said instances of this fraud jumped in 2008 when the economy tanked and countless people in the U.S., working immigrants included, were laid off

Upon losing their job, one of the requirements to stay in America, those immigrants were no longer living legally in the U.S. and had to leave the country, DeVoretz said. Many of them, a large portion of them of South Asian descent, chose to try their luck in Canada.

The gate swinging the other way and immigrants succeeding in fraudulently gaining status in Canada after living illegally in the U.S. suggests Canada may need to beef up its border security, he added.

Unless they are refugees, their failure to live legally in the U.S. doesn't affect their ability to gain legal status in Canada, he said, but perhaps it should.

"There's a suggestion here that perhaps Canada is not doing due diligence. People fail (to live legally) somewhere else and we're sort of letting them in."

In the final paragraphs of his cable, Chicola still notes that given Vancouver's proximity to the U.S., he is concerned that immigrants view the region "as a transit center for ultimate illegal entry into the United States."