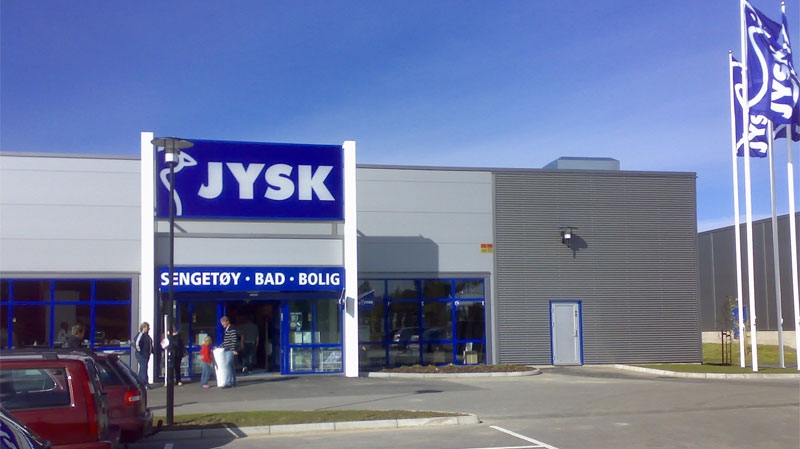 Jysk is a Danish retailing giant that boasts more than 1,700 stores in 34 countries worldwide, including outlets in such far-flung locations as Kazakhstan and Albania.

For many Canadians, Ikea is virtually synonymous with affordable, assemble-yourself furniture. But can the ambitious expansion plans of a virtually unknown Scandinavian rival change that perception?

Jysk is a Danish retailing giant that boasts more than 1,700 stores in 34 countries worldwide, including outlets in such far-flung locations as Kazakhstan and Albania.

But, even though the chain has opened more than 40 stores across Canada since its arrival in 1996, most Canadians have likely never heard of them.

Jysk hopes to change that soon, with plans to open 20 new stores in Canada every year for the next three years.

It won't be a hard sell, considering Jysk stores will strike Ikea customers as very familiar.

"It's sort of the same concept as Ikea where you can buy it today and take it home today," Jysk director of advertising Lynne Williams said in a phone interview from the company's headquarters in Port Coquitlam, B.C.

The major difference is, Jysk aims to sell its products a little cheaper.

"Our theme is quality for less," Williams explained, noting that Jysk's product offering also includes a variety of budget-priced, flat-pack furniture customers can put together themselves.

But the Danny bookcase on sale at Jysk, which is virtually identical to Ikea's iconic Billy shelf, sells at a 40 per cent discount.

Rotman School of Management professor David Soberman says the idea of a poor man's Ikea has a broad appeal.

But Jysk hasn't recreated the Ikea concept wholesale, opting instead for smaller, no-frills stores that compete with the Swedish rival on product and price.

"That gives them an opportunity to go into markets where Ikea would assess that the market's not enough to justify a full Ikea store," Soberman said.

As a result, communities like Saskatoon or Guelph, that are too small to accommodate the sprawling suburban footprint of a typical Ikea, can look forward to a local source of Scandinavian furniture in the near future.

"That cuts both ways," Soberman added, noting that Ikea's success is also rooted in its wide variety of products, most of which are always in stock.

"The disadvantage with being smaller is you don't have quite the product line that Ikea has," he said.

But, rather than matching the entire range of 11,000-plus products found at Ikea, McGill University marketing professor Robert Soroka says Jysk can succeed by offering consumers less.

"They don't have to be the lowest priced on every SKU (stock-keeping unit), but they do have to have the sharpest price on their highest profile SKUs, because that's where Jysk is going to make an impact."

"Nobody wants a product that's not going to last," Soroka added in a phone interview from Montreal. "Despite the fact that your consumer is coming to you for a low price, you're still trying to establish a long-term relationship.

"The retailers that win, like Ikea, are the ones that keep the customer coming back."

Enough room for both?

"Jysk and Ikea typically do not go head-to-head, they're both low-cost alternatives, and the fact is this particular market, particularly in the urban markets across Canada, is not saturated," he said in a phone interview.

"They're typically not in close geographic proximity so there's enough to go round," Soroka said, describing the crammed parking lot that typically greets Ikea shoppers arriving at the store on a Saturday morning.

"When you see it, you realize there's room for one more competitor in the landscape."

That may sound like sacrilege to die-hard Ikea aficionados worried their days spent wandering the maze-like corridors of an Ikea, discount hot dog in hand, may be numbered.

But Soberman insists there are already competitors vying for the same market as Ikea -- and they have more reason to worry than the Swedish giant.

"There's a lot of easy-to-put-together furniture," he said in a phone interview from Toronto.

"You can buy this stuff at Canadian Tire, at Wal-Mart, Zellers. And the real issue is if a company like Jysk comes in you may find some of these other companies start to restrict their product line."

The threat lies in the potential for Jysk to become a 'category-killer' in the way big-box electronics retailers have grabbed the lion's share of that market away from traditional department stores, for example.

While that suggests retailers are poised for a fight, Soroka says that should be a boon to anyone shopping for furniture.

"I think that you're going to see a lot of strong competitors vying for the love of this particular market and that love will be expressed with extremely low prices," he said.

And the analysts agree that, with the arrival in Canada of U.S. 'discount-chic' retailer Target looming on the horizon, our retail landscape is set for a shakeup.

"Target is the breath of fresh air that Canadian consumers have been waiting for," Soroka said, considering the steady decline of Zellers and the now-ubiquitous presence of Wal-Mart stores from coast-to-coast.

"It's not going to take much to draw consumers to the new shopping experience."

Williams says Jysk is ready for the challenge.

"It's going to be competition in the market, for sure, but if you get something like a Target it tends to draw shoppers in," she said.