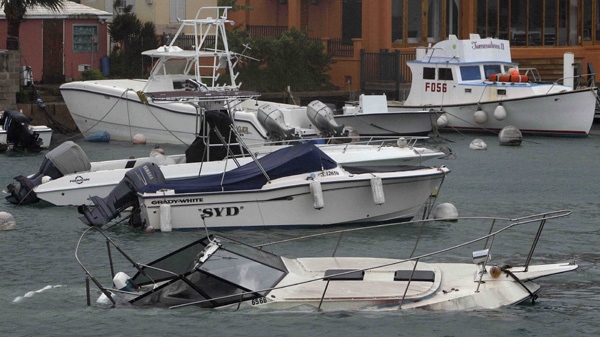 Bermudians battened down their homes in pelting rain to wait out Igor, which was barely a Category 1 hurricane with maximum sustained winds of 120 kph as it swirled close to the island after dark. The wind whipsawed trees and power poles, knocking out electricity in many parts of the island. But there were no early reports of major damage.

"We're certainly getting our money's worth in drama," lawyer James Dodi said while standing outside a hotel in downtown Hamilton watching Igor's winds whip through palm trees and howl around buildings.

Dodi, 43, a native of Toronto who moved from Canada six years ago, left his Hamilton home and took refuge at the hotel, where he hoped the power would hold out through the storm.

Some storm-seasoned islanders ventured outside during the day to gawk as the hurricane force winds that hit by midday drove 5-metre surf onto shore or to triple-tie the moorings of their boats even as the government warned people to stay indoors.

Flooding was reported in low-lying areas, while streets in downtown Hamilton, the capital, were covered in several inches of water and littered with tree branches and other debris.

Igor's eye was forecast to pass over or very close to Bermuda before midnight, according to the U.S. National Hurricane Center in Miami. Even a near-miss could cause substantial damage, with hurricane-force winds extending up to 150 kilometres from the storm's eye.

The storm was expected to veer northeast -- away from the United States -- after passing Bermuda. But forecasters said it would continue causing high surf and strong rip currents along the U.S. eastern seaboard.

Most tourists hopped on flights home before the airport closed Saturday afternoon, but Elaine and Brian LaFleur of New Bedford, Massachusetts, said they actually changed the date of their flight so they would make it to Bermuda in advance of Igor. They wanted a new experience for their 28th trip to the island.

"We've done everything else on this island, but we've never experienced a hurricane," said Elaine LaFleur, 62.

The couple's original itinerary had them arriving Sunday but they flew in Friday.

Brian LeFleur, 66, said the couple was staying busy indoors playing games on their iPad. He had hoped to watch Sunday football but the cable television at their hotel in downtown Hamilton lost its signal.

Bermuda's power utility reported that roughly 19,500 customers were without electricity by Sunday evening on the British territory of 68,000 inhabitants.

Both said they were relieved that the storm was not stronger. "It's a blessing in my mind," Simmons said.

Igor lost strength and was downgraded from a Category 2 hurricane before dawn Sunday, raising optimism that Bermuda would be spared major damage.

"We prayed that the storm would be downgraded, and it looks like our prayers have been answered," said Fred Swan, a 52-year-old teacher.

As the hurricane bore down, most islanders hunkered down in their homes and listened to the howling winds and cracking thunder outside.

School principal Marion Dyer, 47, said she holed up with her 8-year-old daughter and two others after losing power around dawn, when Igor's outer bands began severely whipping Bermuda.

"Now and again we get bursts of wild wind which sends the rain in all directions," Dyer wrote in an email to an AP reporter. "We have heard several rolls of thunder which are becoming more frequent."

Premier Ewart Brown said islanders "have been forced to recognize that the ocean is not so vast and Bermuda not so unique as to be separated from the awesome power of nature."

Hotel cancellations were reported across Bermuda, popular with tourists for its pink sand beaches and with businesspeople as an offshore financial haven.

But some islanders checked into resorts to ride out the storm. At the Fairmont Hamilton Princess hotel near the capital's downtown, about half of the 410 rooms were occupied, said Jonathan Crellin, the hotel's general manager.

"The hotel is locked down tight and ready to take Igor when he arrives in full," Crellin said from the hotel, which like most buildings in the territory is built of solid concrete.

High surf kicked up by the storm has already swept two people out to sea in Puerto Rico and the U.S. Virgin Islands, far to the south.

Forecasters said the storm could drop 15 to 23 centimetres of rain over Bermuda and cause significant coastal flooding.

Steve Gibbons and five relatives ventured out on foot to Somerset Bridge, where high winds whipped the sea over the bridge and made it difficult to stand up straight.

"Later on, we'll be inside hunkered down," Gibbons said while bracing himself against the gusting wind.

A causeway linking the main island with St. George's parish was closed, along with the L.F. Wade International Airport. Officials said schools would be closed Monday and Tuesday, and a local newspaper cancelled its Monday edition.

Bermuda's building codes specify that homes must be built with walls at least eight inches thick, and be able to withstand 241 kph gusts and sustained winds of 177 kph. Some power and phone lines are underground.

In Mexico on Sunday, officials raised to 12 the death toll from Hurricane Karl, which made landfall on Mexico's Gulf Coast on Friday and soaked Veracruz, Puebla and Tabasco states in the south-central part of the country.

At least 30,000 people were displaced by flooding and landslides in Veracruz alone, according to a report from the Civil Protection agency.

Gov. Fidel Herrera said 125 municipalities were in a state of emergency.

Far out in the Atlantic, Tropical Storm Julia was weakening and not expected to threaten land.