Hot dog champ to chomp down on pizza in Ontario 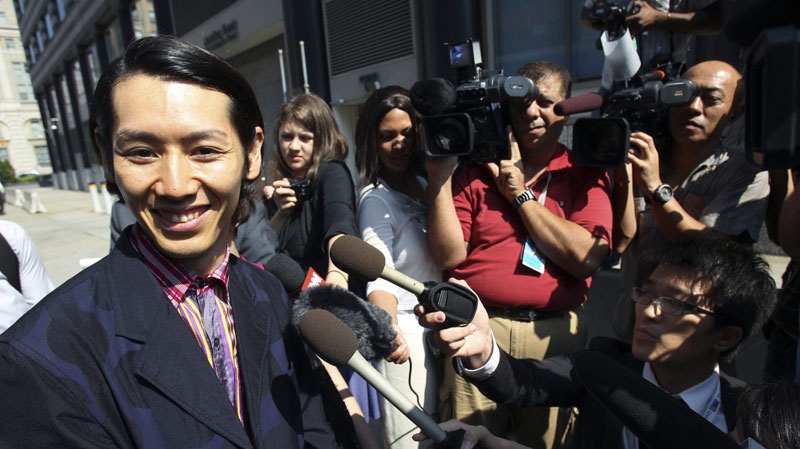 Takeru Kobabyashi has no idea what he is getting himself into.

Most people will know Kobayashi as the thin-looking champion hot-dog eater they have seen on TV over the past 10 years.

And this Sunday, the 32-year-old rock star of the competitive eating circuit will enter a Barrie, Ont., restaurant and try to inhale more pizza than any of his opponents.

The problem is he's not used to eating pizza competitively, though he has dabbled in competitive calzone eating.

"Last year in June, he was in a Pizza Hut P'zone contest," his translator Maggie James explained to CTV.ca during a recent telephone interview from New York.

"So, it's a completely different kind of food."

Calzones, of course, have bread on both sides of the cheese and pepperoni. One-sided, pizza is a whole different story, apparently.

To prepare, Kobayashi has been doing some research.

"He ordered about four pies to his house," said James, explaining that Kobayashi is still trying to figure out the optimal method of shoving pizza down his throat.

Speaking in Japanese to his translator, Kobayashi provides a lengthy explanation of what he sees as the advantages and disadvantages to eating pizza in a contest.

"With pizza, it's difficult to cut it into a shape that's easy to swallow," Kobayashi said.

The "easy part" of the challenge is that you can't eat that much pizza in one sitting, which will limit the stress to his stomach at the end.

But he admits that he has "no idea about the competition" he will face on Sunday and says there could be a number of strong competitors.

Among them will be Peter "Furious Pete" Czerwinski, a McMaster University engineering student who scarfed down 27 slices of pizza in a 12-minue period during a Brooklyn, N.Y., event earlier this summer.

Czerwinski recently told the Toronto Star he considers it "an honour" to go one-on-one with Kobayashi.

The ups and downs of a hot dog hero's life

Nine years ago, Kobayashi made a name for himself in North America when he ate 50 hot dogs to win the Nathan's Famous Fourth of July Hot Dog Eating Contest.

"Honestly, I really don't dislike any kind of food," he said through his translator.

For six straight years, Kobayashi was undefeated at the annual Coney Island event and he became a media sensation, making appearances at various competitions and starring in TV commercials.

But after he recently had a falling-out with Major League Eating -- the organization which bills itself as the "world body that oversees all professional eating contests" -- Kobabyashi has become a free-agent of sorts.

The U.S.-based league wanted Kobayashi on a contract. But he preferred to be able to enter the contests of his choice and refused to sign.

The dispute culminated in Kobayashi being arrested at this year's Coney Island contest, after he crashed the contestant platform and was charged with trespassing.

The MLE said his actions "were inappropriate and unfortunate," but expressed hope that Kobayashi would be able to "resolve his current situation and move past this."

A month later, The Associated Press reported that a judge agreed to drop the charges against Kobayashi if he stayed out of trouble for six months.

Sunday's contest marks the first time that he will compete north of the border, something James said Kobayashi wouldn't have been allowed to do if he had signed with MLE.

After getting offers to attend contests all over the world, Kobayashi says that he respected the passion of the people behind PIE -- the restaurant where the contest will be held -- and he found their pitch "really inspiring" and that it was "important" for him to be at the Ontario contest.

Looking forward to the future, Kobayashi said he would like to compete in many countries and possibly establish a new league where "competitive eaters all around the world" can compete with "more freedom."

As for Sunday, Kobayashi isn't making any predictions of how much he'll be able to eat, or how he'll fare.

And he won't get a chance to do so before Sunday, as he is headed straight from the airport to the contest.

In the absence of big sponsors, the guy nicknamed "The Tsunami" will surely be the story of the day, regardless of whether he wins or loses.