Cramped and unhygienic conditions revealed through secretly recorded video at two Alberta egg farms are “unacceptable” and “horrific,” but not standard industry practice, says the chair of the Egg Farmers of Canada.

The industry is reacting to an investigative report by CTV’s W5 that revealed troubling conditions at two egg farms, including cramped cages, overcrowded chickens, some of which were injured or covered in feces.

The video was recorded by an MFAC undercover investigator at the two egg production facilities located near Edmonton, Alta., in the summer of 2013. W5 agreed not to reveal her identity.

“I’ve been on many farms in this country, and this is an aberration of what happens on an egg farm,” Egg Farmers of Canada chairman Peter Clarke told CTV’s Canada AM Monday. “The part where an individual was transferring the birds from one level cage to another – that was just animal cruelty.

“It is something that just does not happen in our industry.”

Video footage obtained at Creekside Grove showed sick and injured chicks undergoing a practice called “thumping,” in which birds are killed by smashing them against a hard surface.

The video shows birds that survived, but are left in a garbage bag with dead chicks.

“That was just totally unacceptable, there’s not one egg farmer in Canada that would agree with that or accept that,” Clarke said, explaining that his association is investigating the matter, including whether the video content is an “accurate portrayal.”

“I am questioning the validity of the video, absolutely,” Clarke said, adding if the footage proves to be accurate, his association will “make this right,” by working with the egg producers, the province and implementing training programs for staff.

“Whatever it takes, we will fix it,” he said.

W5 sought comment from Amin Valjii, the owner of the two egg farms where the videos were recorded. He refused the request for an interview.

W5 arranged to screen the undercover video to representatives of the Egg Farmers of Alberta, including the marketing manager, David Webb.

Following a private screening, at which no cameras or recording devices were present, the association refused to do an on-camera interview, but sent W5 a statement.

"We take our animal care responsibilities very seriously and we remain committed to determining the extent of the situation and corrective action required. Since a comprehensive assessment and analysis, as well as remediation, is our priority, we respectfully decline the further interviews you propose."

The W5 investigation also prompted the Egg Farmers of Canada to issue a national alert, urging farmers Across Canada not to provide media access to their farms or barns.

Clarke defended the alert, saying it was issued for security purposes.

“When we heard there was undercover video by an activist group, people trying to gain access to our barns, we became very alarmed,” he said.

Meanwhile, Mercy for Animals Canada is calling on McDonald’s Canada to take action against animal cruelty by banning its egg suppliers from using hens that are confined in battery cages.

According to the animal-rights organization, the two Alberta farms where the videos were recorded produce eggs that are ultimately sold through the restaurant chain: Creekside Grove provides chicks to Kuku, which in turn supplies eggs to Burnbrae Farms, the primary egg supplier to McDonald’s Canada.

Both McDonald’s Canada and Burnbrae Farms said in written statements Monday that McDonald's does not receive eggs from Kuku Farms, or any other Alberta-based farm.

McDonald's said the company does not condone animal abuse by its suppliers.

"Abuse is never tolerated in our supply chain and McDonald’s has strict policies in place concerning the treatment of animals that our suppliers must adhere to at all times," it read.

With files from CTV's W5 and The Canadian Press 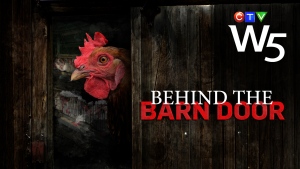 Behind The Barn Door