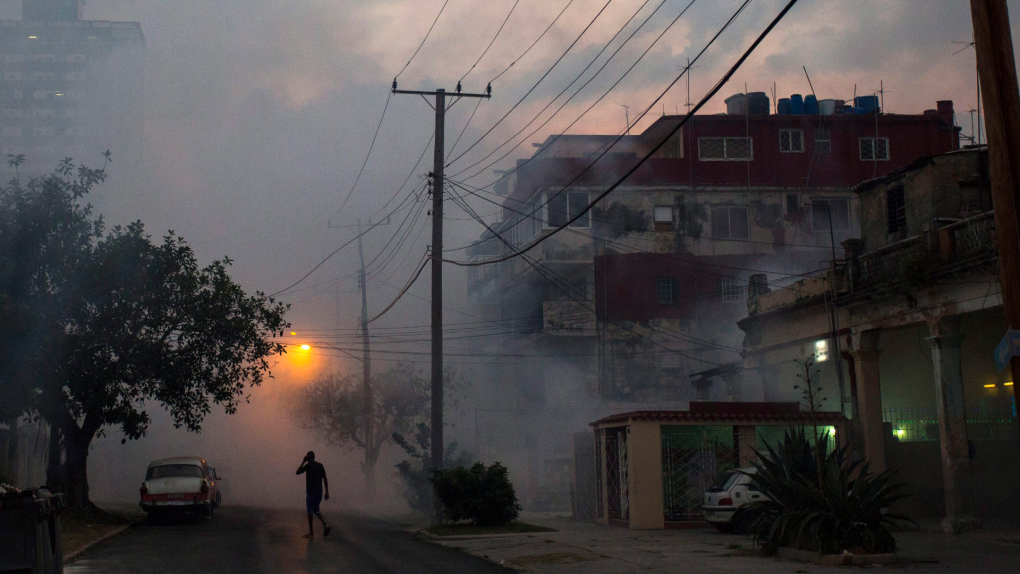 TORONTO -- Canadian diplomats who suffered mysterious health issues after living in Cuba may have been exposed to neurotoxins used during pesticide fumigation against the Zika virus, according to a leaked study.

The new research presents a more mundane cause for the so-called “Havana Syndrome” which counters previous reports that some 40 Canadian and U.S. diplomats may have been victims of a targeted “sonic attack.”

“If it is fumigation, at least we can stop it or change how we do it. We can do something about it,” said lead author Dr. Alon Friedman in a phone interview with CTVNews.ca from Winnipeg.

The study, first obtained by the French-language news program Enquete, was undertaken by a multidisciplinary group of researchers at Dalhousie University, the Brain Repair Centre and the Nova Scotia Health Authority. Beginning last August, they tested 28 people, including 12 unexposed participants who never lived in Havana. They determined that the region of the brain called the basal forebrain was the primary location of the damage in exposed participants, which was causing issues with concentration, sleep and memory. Those people were found to have a lower concentration of enzymes, which are targeted by a few types of toxins, said Friedman, including those found in warfare chemical agents and pesticides.

“Diplomats had lower activity of the enzyme, suggesting that they had a toxin in the blood,” said Friedman. “We collaborated with a toxicologist, and measured the level of the toxins in the blood. We detected neurotoxins in most of them. We shouldn’t have them usually in our blood.”

Friedman said the team actually used a simple Google search to determine that pesticides were used extensively in Cuba during a fumigation campaign against the Zika virus in 2016. “We learned that (the diplomats’) houses and their areas were fumigated,” said Friedman.

The team believes they can rule out “warfare chemical agents” as the neurotoxin source, because that would result in a more intense level of exposure. “Usually they cause a much more severe intoxication,” said Friedman. Instead, the researchers hypothesized that the diplomats and their families experiences “recurrent, low-dose exposure to neurotoxins.”

In an emailed statement to CTVNews.ca, Global Affairs Canada spokesperson John Babcock said that the research is a “significant contribution” to ongoing efforts to further the investigation, including environmental assessment and addressing health concerns.

“While we are exploring all avenues, including the research at Dalhousie, no definitive cause of the health incidents has been identified to date,” he wrote. “An environmental assessment was completed at our mission in Cuba in late 2017. Pest control measures were documented within that report and an additional complementary environmental assessment was recommended and completed in late spring 2019.”

Earlier this year, diplomatic families spoke with CTV News under the condition of anonymity to explain the severity of their symptoms, which included dizziness, confusion, headaches and nosebleeds. “My brain just doesn't work the way it used to,” one woman said, adding that she sometimes suddenly loses her balance. “My kids are having nosebleeds,” said another. “My youngest son is passing out for no reason.” In February, 15 people including five diplomatic staff members, their spouses and children, who worked in Cuba filed a statement of claim in federal court, suing the government for $28 million.

Havana has been designated an “unaccompanied post” since April 2018, meaning families no longer accompany diplomats there. “This has been a harrowing experience for these diplomats and their families and we will continue to take all steps necessary to help them,” said Global Affairs spokesperson Babcock.

If fumigation is the cause, the case may go far beyond the Canadian diplomats and their families. “This is a global health issue,” said Friedman. “To what extent you want to kill all mosquitos because of diseases, versus how much you expose people to toxins. Very little is known how much toxins we can be exposed to as human beings.”

Friedman and his team have initiated a joint study with the Cuban Neuroscience Center to look at the local population.