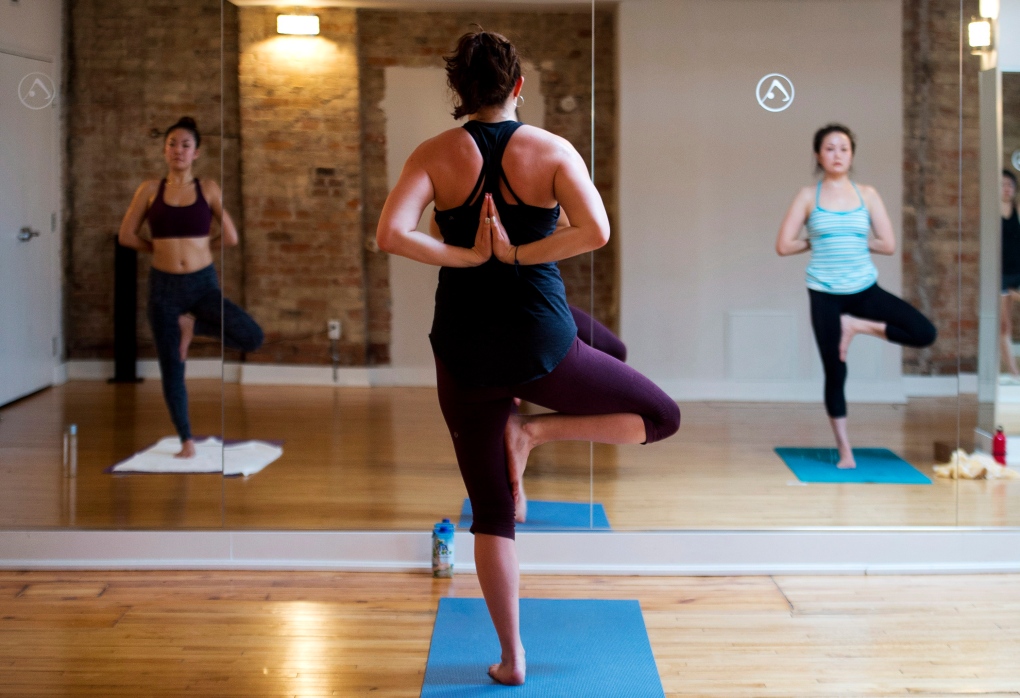 TORONTO -- As a yoga devotee and founder of her own studio, Linda Malone is sharing her passion for the practice through a special program dedicated to helping people living with mental illness.

Malone is the director of the Blu Matter Project, a not-for-profit organization acting as a bridge between its ambassador yoga studios and individuals living with depression and/or bipolar disorder.

She said Blu Matter also uses social media to share research being done around the science and neurobiology of mindfulness, which encourages individuals to become conscious and aware of their thoughts and feelings in the present moment.

"Many of the cognitive behavioural therapies incorporate an element of mindfulness," said Dr. Arun Ravindran, senior scientist in the Campbell Family Mental Health Research Institute at the Centre for Addiction and Mental Health.

"It's a kind of acceptance therapy. You're getting people to realize the appropriate nature of the problem and trying to get them to overcome them."

Malone, founder of Toronto-based studio Iam Yoga, had a deeply personal reason for devoting herself to the cause.

Her brother Michael was just 24 when he committed suicide in August 2012. While he was not formally diagnosed, Malone said her brother exhibited characteristics that were "textbook bipolar" as she recalled dramatic changes in his mood and energy.

"I'd spend time with him, and sometimes he'd be talking a mile a minute about all kinds of different things, jumping from topic to topic," she recalled.

While he smoked from the time he was in high school, Michael knew his sister was into fitness, and she recalled him asking her to go for a run.

"We'd run 20 kilometres and he's still flying -- and I'm dying. These were him in these very manic states," Malone said. "Other times I would go out and he would be cold, belligerent, lethargic, angry."

Malone ended up being connected with therapists at the Centre for Addiction and Mental Health -- Canada's largest mental health and addictions facility -- who helped spread the word about the initiative and referred individuals to the project, although those not working in tandem with CAMH can also apply.

"We sponsor people, so people who otherwise can't afford it who are seeking treatment who are diagnosed with any form of depression -- including mood disorders, anxiety or trauma -- we connect them to the practice of yoga," she said.

Malone said the owner of Toronto's Yogaspace approached her a few months ago and had several of her teachers take part in Blu Matter training, and the studio also plans to launch Blu Matter classes in 2015. Malone said there are plans ahead for more teacher training sessions in addition to establishing a presence in Vancouver.

Malone said they educate participants about key ideas of their practice they can use when they're away from the mat. "Whatever it is that you're doing, it's about becoming first very aware about what you're experiencing mentally and physically."

A simple exercise involves location where participants look around and allow their eyes to move naturally in observing the space around them.

"Begin to pay attention to your breathing and then explore as you're looking around yourself -- floor, ceiling, walls -- explore the connection of your breath to any movements you're experiencing in the body," Malone said.

"This is just a really simple exercise to ground, to step outside of any impulsive or disconnected or manic thought processes."

The Canadian Psychiatric Association and the Canadian Network for Mood and Anxiety Treatments first teamed up to produce evidence-based clinical guidelines for treating depressive disorders in 2001 which were revised in 2009. A new set of guidelines is slated for release next summer, said Ravindran.

He was the lead author of the section focused on complementary and alternative medicine (CAM) treatments which includes yoga, which researchers said may be considered a "second-line adjunctive treatment" in mild to moderate depression.

Ravindran said it's very clear that exercise is beneficial for many emotional disorders, particularly depression and anxiety which arise spontaneously or as a result of a medical condition, like cancer. There are even studies that suggest exercise may be as good as some of the psychological therapies, he noted.

"Having said that, the benefit of exercise as a stand-alone treatment in depression is somewhat questionable -- it's not proven yet," said Ravindran, who is also a staff psychiatrist in the Division of Mood and Anxiety Disorders at CAMH.

"That doesn't mean it doesn't work, but it has not been clearly shown. What is clear is that when exercise is added on to standard treatment -- either psychological or medication -- it does confer additional advantage."

For Micaela, who lives with bipolar disorder, Blu Matter offered her a boost when she was in need as a newcomer to the area also faced with significant stress at work.

Knowing that yoga had been helpful in the past, she sought a new studio and happened to find Iam Yoga near her building, and learned about the Blu Matter Project while visiting the website. She's been a participant for the past two months and is also able to attend conferences and special workshops.

Micaela said she is at a stage of stability where she doesn't require therapy. She currently uses medication, and yoga is part of her holistic approach to managing her mood disorder, which encompasses other coping strategies like journalling, breathing, meditation and mindfulness.

"One of the things that is fantastic about yoga is helping foster a connection to my body," said Micaela, who preferred not to have her surname published.

"Particularly in times of stress, I may tend to do stress eating or just push myself to the point of working on fumes. But the fact that I'm connecting with my body twice a week or more, it makes me feel more attuned to what I'm feeling."