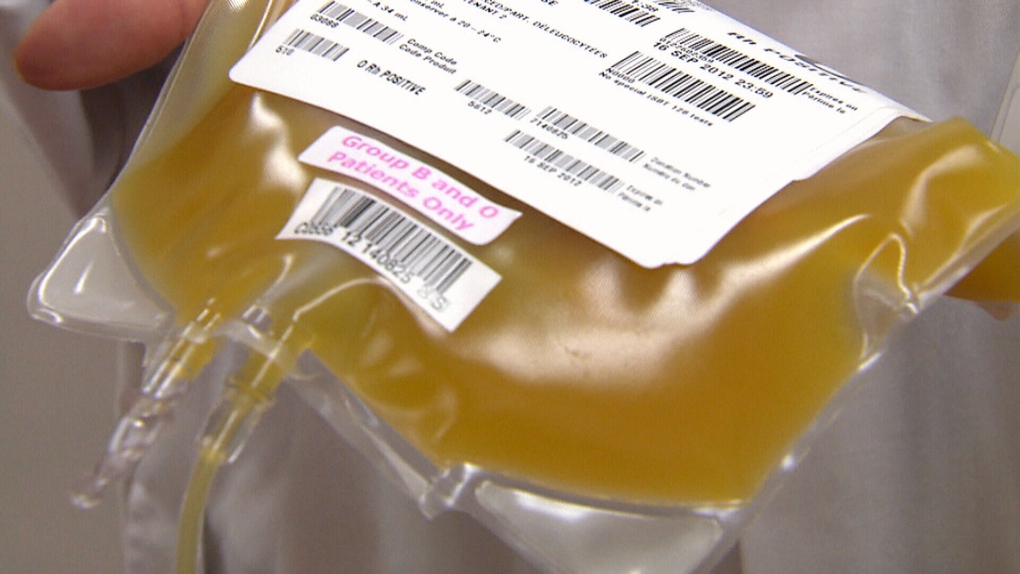 A bag of plasma, the yellow liquid left over when red blood cells are removed from our blood, is shown in this undated file photo.

FREDERICTON -- An Ontario company that pays people for their blood plasma -- a practice banned in two provinces -- has begun construction of a New Brunswick clinic while it awaits approval from Health Canada.

Canadian Plasma Resources has chosen a location in Moncton, but company CEO Barzin Bahardoust would only say it's near the University of Moncton.

"It is under construction at the moment and we have gone to Health Canada and submitted an application to include this location under our licence to collect source plasma for further manufacturing," Bahardoust said in an interview Friday.

The company currently operates a donation clinic in Saskatoon, but Ontario and Quebec don't allow them. It had two clinics in Toronto, but they were shuttered by provincial legislation in 2014.

Bahardoust said he'd also like to open a plasma donation clinic in British Columbia by the end of 2017.

Donors can give plasma as often as once a week, for which Canadian Plasma Resources gives them either a charitable tax receipt or a $25 gift card.

"This does suddenly bring blood plasma into the market as a commodity and we've never done that with the body parts of people, and we shouldn't be doing it with the body fluids of people either," Coon said.

"Seventy per cent of what we use in Canada comes from paid donors, and it just so happens that they are American paid donors. I don't see why we can't pay Canadians for the same type of donations and for the same products at the end of the day," Boudreau said.

Boudreau said such clinics are strictly monitored and regulated by Health Canada, and the provincial Health Department doesn't play a role.

Blood plasma is the yellowish fluid that remains after red and white blood cells and platelets are removed.

Fresh plasma is used for transfusions while processed plasma is turned into a variety of pharmaceutical products. Plasma collected in Canada is sent to the United States or Eastern Europe for processing and then purchased back for use with Canadian patients.

Bahardoust said his company currently sends its plasma to Germany for processing, but is in talks with a company that wants to open the first Canadian processing facility in Quebec by the end of 2019.

He said the Moncton facility would need about 30 full time staff, but would open with about half that number, and would eventually require about 2,500 regular donors.

Bahardoust said construction should be complete by the end of this year and hopes that Health Canada will approve the operation by the end of February.

Bahardoust said the exact location would be announced at that time.