Women with transvaginal mesh implants to share $21.5 million in settlement 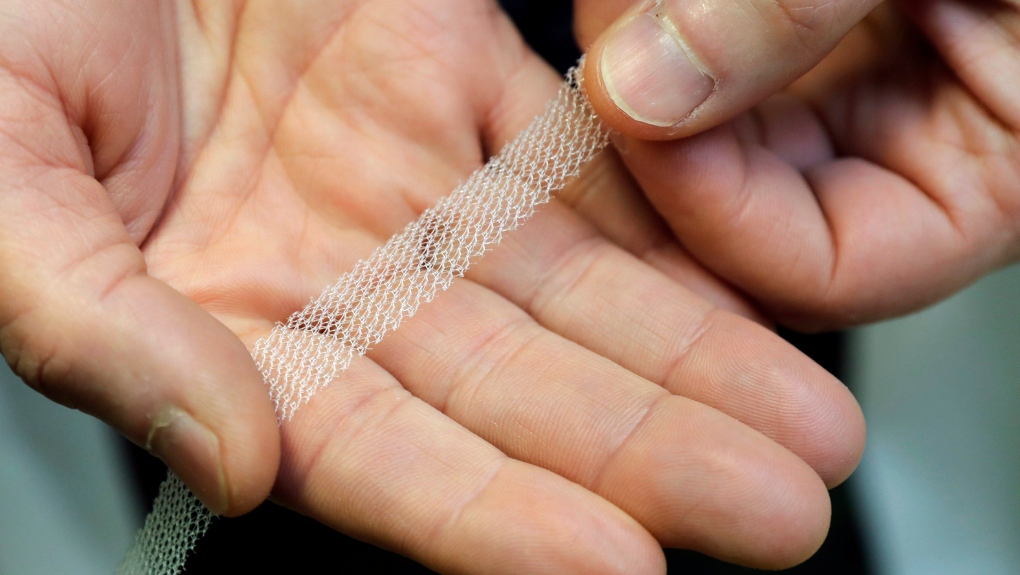 In this Dec. 20, 2018, photo, Dr. Jeffrey Clemons, a pelvic reconstructive surgeon, holds a sample of transvaginal mesh used to treat pelvic floor disorders and incontinence in women as he poses for a photo in Tacoma, Wash. (AP Photo/Ted S. Warren)

TORONTO -- A group of Canadian women who suffered ill-effects from implantation of a medical device called transvaginal mesh will receive a total of $21.5 million in compensation, recent court records show.

The class-action settlement was reached between about 325 women who received the implants and the manufacturer of the device, Boston Scientific. The women's share of the money will depend on the severity of their medical issues.

In approving the settlement, class definition, and proposed method of reaching out to class members, Ontario Superior Court Justice Paul Perell noted the agreement is similar to another recently approved class action involving the mesh.

The net-like implants are used to treat conditions such as stress urinary incontinence or pelvic organ prolapse. The implants are designed to reinforce a weak vaginal wall or support the urethra or bladder neck. The polypropylene mesh is widely used. However, many recipients have had an array of serious side effects.

Boston Scientific is the Canadian subsidiary of its Delaware-based parent and is the sole distributor of the company's transvaginal mesh devices in Canada. The product has been implanted in thousands of Canadian women.

The lead plaintiff in the class action, Susan Vester, suffered painful complications from her implant. Court documents show she was given the device in January 2010 as a way to prevent incontinence -- an operation about 25,000 women a year have in Canada.

Among other complications, Vester said she suffered urinary problems, difficulty walking, emotional stress and pain during sexual intercourse. She argued she was unaware of the risks before the surgery and would have refused the procedure had she known.

Vester and her husband sued Boston Scientific, alleging the devices were defective and unsafe. Among other things, they argued the mesh was negligently designed and sold, and that recipients had required intensive surgical interventions to try to alleviate the side effects.

The company maintained her complaints were the result of pre-existing medical conditions, not the mesh. It denied the product caused the problems about which the women complained.

After initially refusing to do so in 2015, Perell certified the lawsuit as a class action in February 2017.

"There is some basis in fact that the polypropylene mesh in each of Boston Scientific's transvaginal devices has a clinically significant deficiency," Perell wrote at the time. "Boston Scientific's arguments based on an alleged multiplicity of differences between the products, patients, and the complications, do not negate the commonality of the proposed common issues."

The settlement also applies to about 20 women who've had the implants since the action was certified, and they have 60 days to opt out. Boston stopped selling the devices for treating pelvic organ prolapse last July.

In an earnings call last month, the U.S. company's chief financial officer said Boston was working to resolve litigation over the mesh. More than 95 per cent of known claims were settled or were in the final stages of settlement, Dan Brennan said. He said the company expected to pay US$115 million into settlement funds this year.

This report by The Canadian Press was first published on March 4, 2020.