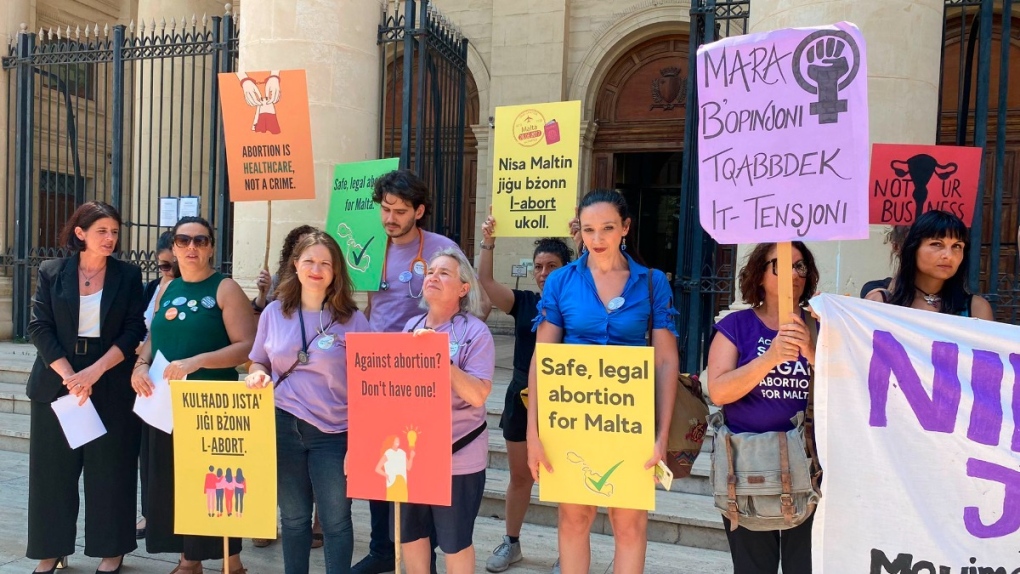 A pregnant American woman who suffered an incomplete miscarriage while vacationing in Malta will be airlifted to a Spanish island on Thursday for a procedure to prevent infection because Maltese law prohibits abortion under any circumstances, the woman's partner said.

Jay Weeldreyer told The Associated Press by phone from a hospital in the island nation that his partner, Andrea Prudente, is at risk of a life-threatening infection if the fetal tissue isn't promptly removed.

Prudente, 38, experienced heavy bleeding on June 12, followed by a premature rupture of the amniotic sac and the separation of the placenta, according to Weeldreyer, 45. While the hospital is carefully monitoring her for any sign of infection, the facility cannot perform the surgery to complete the miscarriage, he said.

Malta is the only European Union member nation that outlaws abortions for any reason.

Contacted by The AP, Mater Dei Hospital, where Prudente is being treated, said it wasn't allowed to give out patient information due to privacy regulations.

"The miscarriage is 80% complete," Weeldreyer said. "Her waters are broken, the placenta has separated, but because of a (fetal) heartbeat," the fetus cannot be removed, he said.

In separate comments to other news outlets, the couple described the placenta as being partially detached.

The couple from Issaquah, Washington, a town near Seattle, arrived in Malta on June 5 for a long-awaited vacation. Prudente started bleeding and was hospitalized a week later, her partner said. He indicated she was 16 weeks pregnant when the bleeding began.

Along with worrying about the infection risk, the two fear Prudente might resume hemorrhaging during the medical evacuation flight they have arranged for Thursday evening to take them to Mallorca.

Like Malta, Mallorca is an island in the Mediterranean Sea. Originally, the couple aimed for a medical evacuation to Britain, but were told flying the longer distance was too risky.

"That entire time that you're traveling, if anything goes wrong, it could end up being catastrophic," Weeldreyer said in a subsequent, video interview with AP. "So our choices are, effectively: stay in Malta and be exposed to the risk of catastrophic and unstoppable infection that could set in at any point in time or take this risk in travel where you might bleed out."

What had started out on what the couple thought would be a "babymoon" vacation was transformed into that dilemma, the "worst of all possible worlds where there is no good choice," said Weeldreyer.

According to their plans, an ambulance will take Prudente to Malta's airport. After the flight arrives in Mallorca, another ambulance will whisk her to a hospital that told the couple it could provide the care she needs.

Under Spanish law, abortion is permitted upon request through the 14th week of pregnancy and up to the 22nd week when a woman's life or health is in danger.

Malta's Mater Dei Hospital "has done a good job within the realm of what they are allowed to do" under that country's law, Weeldreyer said. His partner is receiving antibiotics and being closely monitored for signs of infection, he said.

The Women's Rights Foundation in Malta filed a legal protest in court last week that demanded the legalization of abortion in the tiny island nation.

Lawyer Lara Dimitrijevic, an activist with the foundation, said abortion rights supporters in Malta have closely monitored the situation in the United States. Some states have enacted laws severely limiting or outlawing abortion that could be triggered if the U.S. Supreme Court reverses Roe v. Wade, the 1973 decision that recognized an individual's right to choose abortion.

"We (in Malta) can't be any worse, as we have a total ban, but we're starting to see situations like in Poland and now America, where there is a reversal of laws, a stripping of women's own bodily autonomy, that is heartrending," Dimitrijevic said in a phone interview.

Poland, like Malta a traditionally Catholic country, tightened its abortion law in 2020.

The lawyer described the Washington state couple as "very brave to go public with this." Since their case was publicized in Maltese media, "more women are coming forward to speak of their experience or that of family members."

On Wednesday, an anti-abortion group in Malta, Doctors for Life, issued a statement on the Prudente case, saying it "firmly believes that the life of the mother always needs to be protected."

It said that in similar cases, "careful assessment is made to assess the severity of the condition" and that if serious bleeding or infection occurs, "then the uterus is always evacuated" upon consultation with two experts.

If delivery is deemed necessary, "then this is done, even if the fetus is too young to survive outside the womb," the organization said, defending Malta's abortion policy.

Barry Hatton in Lisbon, Portugal, and Trisha Thomas in Rome contributed to this article.

Have you tried accessing abortion services in Canada?

Following the U.S. Supreme Court’s decision to overturn Roe v. Wade, CTVNews.ca wants to hear from Canadians who have had an abortion.

Did you struggle to access abortion services or information in Canada? Was it difficult to secure an appointment?

Tell us your story by emailing dotcom@bellmedia.ca, and include your name and location. Your comments may be used in a CTVNews.ca story.