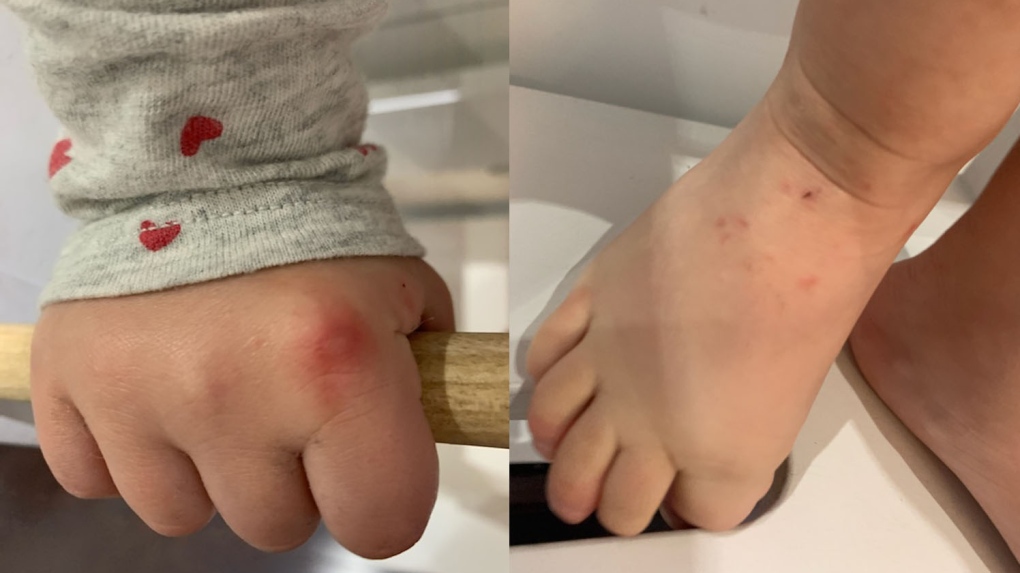 The family is angered that Isabelle was misdiagnosed by staff at the hospital and the resort’s on-site, 24-hour medical station. (Sarah Rundsztuk)

Three days into their stay, their toddler Isabelle began vomiting and convulsing. “I ran out the room screaming for help,” Sarah Rundsztuk told CTVNews.ca in a phone interview.

Rundsztuk said she, her fiancé, sister and her toddler were sent to a local hospital, where their daughter was misdiagnosed with a bacterial infection, and sent back to the resort where her symptoms returned. After a subsequent two-day hospital stay, where the child was misdiagnosed again, Rundsztuk and her family left the Royalton Bavaro hotel in Punta Cana because they felt “left in the dark and scared.”

“I was traumatized, my daughter was unconscious and having a seizure,” Rundsztuk said, adding that resort staff were “nonchalant” and “just staring at me like I was crazy.”

“It was so scary and I just hope no other family has to go through that,” she said.

The family is angered that Isabelle was misdiagnosed by staff at the hospital and the resort’s on-site, 24-hour medical station. Rundsztuk said “it was unbelievable” that, rather than immediately calling an ambulance, the resort’s medical staff stressed insurance forms needed to be filled out first.

Once the family returned to Canada, the toddler was quickly diagnosed with HFMD. Symptoms of the contagious viral infection include a high fever, sores in the mouth and a rash on the hands and feet.

Rundsztuk said her family only ended up receiving a refund of $1,000 from the resort for the unused nights of accommodation. But because they stayed at the hospital half the time, they’re calling for a full refund of $6,800 from Sunwing Travel Group, through which the whole trip was booked.

“We couldn’t sleep and there’s no way we could have enjoyed anything,” Rundsztuk said. “We just wanted to get home to make sure she was safe.”

Rundsztuk says she’s speaking out so other families “don’t have to go through it.”

A Sunwing spokesperson told CTVNews.ca in an email the company has “contacted the resort and requested a full review of what took place, with a focus on ensuring any future incidents are swiftly and responsively addressed.”

“The health and safety of our customers is of paramount importance to us,” she said, adding they “were concerned to hear about the experience” of the family. They welcomed “the opportunity to speak with the family to better understand their situation and provide any support that we can.”

A representative from Blue Diamond Resorts, which owns the resort in question, also sent an email to CTVNews.ca saying, “we are taking the opportunity to review our staff’s handling of this matter and ensuring that the proper protocol was followed.”

Rundsztuk, her fiancé, sister and toddler had arrived at the resort on Jan. 20. But on their third night there, Isabelle came down with a high fever and began vomiting and convulsing.

And despite them screaming for help, Rundsztuk said “the staff there had no reaction and were not quick to help us.”

Once they rushed to the resort’s medical station, she said the on-duty nurse repeatedly told them: “I will not let you into the ambulance until these (insurance) papers are filled out.”

She said thankfully they had travel and medical insurance. But that wouldn’t prepare them for the following days.

They were taken to Hospiten Bávaro, where the family said they weren’t provided an English translator and couldn’t communicate with staff properly.

“I kept asking, ‘Is my daughter going to be OK, and everyone just looked at me,” she said. Rundsztuk said a doctor told them Isabelle only had a bacterial infection and were sent back to the resort.

But after only a couple hours, she began shaking again and the family raced back to the resort’s medical station at 3 a.m.. And after going through the same hassle of filling out forms again, an ambulance was called.

They ended up staying at the same hospital for two days, but this time Isabelle was diagnosed with tonsillitis.

Once they returned to the resort they’d had enough, Rundsztuk said. They felt the staff at the hospital and resort had been unhelpful and, with the help of Sunwing’s team, they rebooked flights back to Canada on Jan. 25.


CHILD DIAGNOSED WITH HFMD IN TORONTO

Once in Canada, Isabelle was admitted to The Hospital for Sick Children in Toronto, where she was diagnosed with HFMD. Doctors there said the child’s seizure was caused by the fever.

Vancouver-based family physician Dr. Melissa Lem, who wasn’t involved in Isabelle’s care, explained that vacationing at certain resorts could increase the risk of catching the disease.

In an email to CTVNews.ca, she said this is because of the crowded living conditions in a resort and the tropical climate, where outbreaks occur year-round. Outbreaks in other temperate climates are more common in the summer and autumn.

Lem said it’s possible to misdiagnose HFMD as tonsillitis as both conditions cause sore throat and fever fatigue. “That said, HFMD has a fairly characteristic rash pattern around the hands, feet and mouth, while tonsillitis doesn't cause the same sort of rash.”

“There's no specific treatment for HFMD other than supportive care, including rest, fluids and pain medication,” she said. She warned people should be “especially careful with hand hygiene, disinfect shared surfaces and avoid sharing utensils and drinking cups, especially if there's an outbreak in your community.”

Rundsztuk said she believes the family’s medical and travel insurance will cover the cost of both hospital stays and re-booked flights.

In the statement to CTVNews.ca, a Sunwing spokesperson said the company’s representatives have “regular desk hours” in all their resorts and could have been reached 24/7.

“Our representatives are trained to support our customers in instances such as this one and can accompany guests to hospital, provide translation support etc. as necessary,” the spokesperson said, adding that the family had not made contact with Sunwing’s team “until after the family had attended hospital.”

“When we were made aware of the issue, our destination team re-booked our customers’ flights so that they could return home early and also advocated with the hotel to refund the unused nights of accommodation given their early departure.”

But Rundsztuk argues that “Sunwing should be responsible and refunding our entire trip” because her family spent so much time at the hospital and she believes Isabelle contracted HFMD at the resort.

The whole ordeal has soured the family’s future trips.