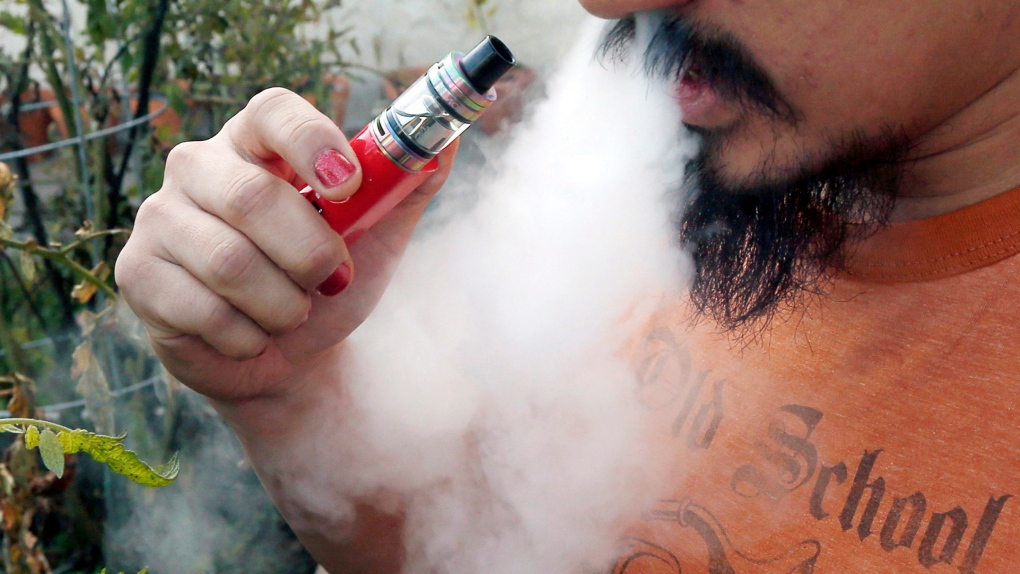 In this Oct. 18, 2019 file photo, a man blows a puff of smoke as he vapes with an electronic cigarette. (AP Photo/Jim Mone, File)

DETROIT -- Doctors at a Detroit hospital have performed what could be the first double lung transplant on a man whose lungs were damaged from vaping.

No other details of the transplant were released Monday by Henry Ford Health System, which has scheduled a news conference Tuesday. The patient has asked his medical team to share photographs and an update to warn others about vaping.

The team of medical experts that performed the procedure believes it is "the first double lung transplant in the world for a patient whose lungs were irreparably damaged from vaping," the health system said in a news release Monday.

"It would be nice if it's the last -- if the epidemic of acute lung injury can be brought under control," said Dr. David Christiani at the Harvard T.H. Chan School of Public Health and Massachusetts General Hospital in Boston.

Christiani said he's not sure if the number of double lung transplants due to vaping illnesses will increase. He said factors include the availability of donor lungs and the chronic effects of illnesses from vaping that could lead to other types of conditions.

More than 2,000 Americans who vape have gotten sick since March, many of them teenagers and young adults, and at least 40 people have died.

"We've certainly seen people who are very sick with this," said Dr. Denitza Blagev, a pulmonologist at Intermountain Health Care in Salt Lake City. "I'm not aware (of any other double lung transplants) and 100% certain none of the patients in our system have had a lung transplant from e-cigarette or vaping-associated lung injury."

Christiani and Blagev were not involved in the Detroit transplant.

The Centers for Disease Control and Prevention last week announced a breakthrough into the cause of a vaping illness outbreak, identifying the chemical compound vitamin E acetate as a "very strong culprit" after finding it in fluid taken from the lungs of 29 patients. Vitamin E acetate previously was found in liquid from electronic cigarettes and other vaping devices used by many who got sick and only recently has been used as a vaping fluid thickener.

Many who got sick said they had vaped liquids that contain THC, the high-inducing part of marijuana, with many saying they received them from friends or bought them on the black market.

E-cigarettes and other vaping devices heat a liquid into an inhalable vapour. Most products contained nicotine, but THC vaping has been growing more common.

Some states have enacted bans or are considering bans on some vaping products.

Republican Massachusetts Gov. Charlie Baker issued an emergency ban on vaping products in September in response to the lung illnesses.