University of Guelph setting up lab to research Lyme disease with $1.4M donation 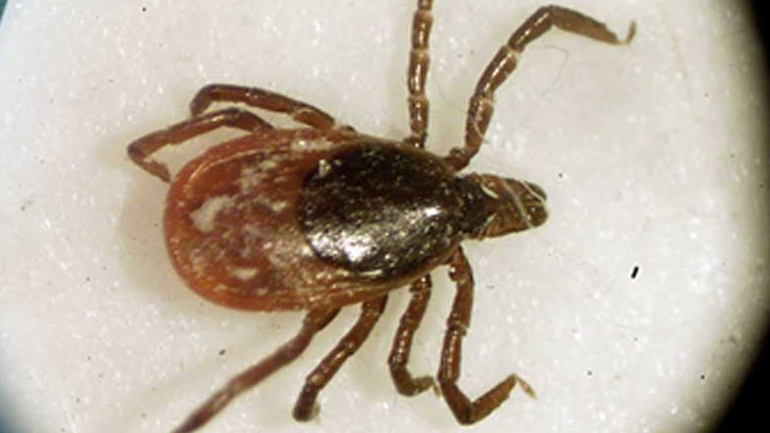 A file photo of a deer tick under a microscope in the entomology lab at the University of Rhode Island in South Kingstown, R.I. (AP Photo/ Victoria Arocho, File)

TORONTO -- Is it Lyme disease or not?

That's one of the questions the University of Guelph hopes to be better able to answer with a new research lab dedicated to improving testing -- and eventually treatment -- for the tick-borne bacteria that is increasingly affecting Canadians country-wide.

On Wednesday, the Ontario university announced it will be setting up the lab with a $1.4-million grant from the G. Magnotta Foundation for Vector-Borne Diseases, named for Magnotta Winery co-founder Gabe Magnotta.

Magnotta, an avid outdoorsman, died in 2009 at age 60 from complications of Lyme disease after suffering increasingly debilitating symptoms for almost seven years. His wife and business partner Rossana Magnotta, CEO of the Vaughan, Ont.-based winery, created the non-profit foundation in 2012 in his memory.

"It's been a long road, and it's been a dream of mine to make it happen," she said in an interview prior to the announcement. "I'm so excited that we're going to be able to be that beacon of hope for so many Lyme patients."

Lyme disease, first identified in Lyme, Conn., in 1975, is caused by the bacteria Borrelia burgdorferi, which infects birds, small rodents and deer. Ticks -- most commonly the blacklegged and western blacklegged species -- pick up the bacteria by biting infected animals, then pass it on to other animals and humans.

Some, but not all, people develop a bull's-eye rash at the site of the bite. Initial symptoms are flu-like, including fever, headache, nausea, light sensitivity and muscle aches. But left untreated, the infection can spread within the body, leading to skin rashes, arthritis-like pain, cognitive impairment, and vision and hearing problems.

Even when the disease is diagnosed in its early stages, patients can develop new symptoms after treatment.

"Lyme disease is increasingly recognized as a substantial threat across the country and there is a profound need for high-quality science that can improve the lives of afflicted Canadians," said Melanie Wills, a research associate in the university's department of molecular and cellular biology, who will direct the new lab.

"We want to uncover the molecular mechanisms that are driving the infections, that are driving persistent symptoms and causing different manifestations in different subpopulations of people who suffer from Lyme disease," she said.

Wills plans to work with other Lyme researchers and centres to develop a national collaborative network involving scientists, clinicians and patients.

"Our focus right now is on people who are ill. How are we best going to diagnose this, and what is the best course of intervention?"

The actual prevalence of Lyme among Canadians is controversial, as are the testing methods used to diagnose the disease and the use by some doctors of long-term antibiotics to treat persistent symptoms caused by the infection.

But Dr. Ralph Hawkins, an internal medicine specialist at the University of Calgary whose practice includes patients with Lyme disease, believes the actual number of those who have contracted the infection is likely five times higher, based on how testing is performed in Canada.

Those with suspected Lyme are first given an ELISA test to detect antibodies in the blood. If positive, blood is then tested by the Western blot method for confirmation.

If that second antibody test comes back negative, the first result is considered to have been a false-positive and the patient is unlikely to get standard antibiotic treatment, despite having symptoms of the disease.

Hawkins said that of 2,500 ELISA-positive tests compiled by PHAC's National Microbiology Lab in Winnipeg over the last five years, just 22 per cent were confirmed by subsequent Western blot tests.

But many in the Lyme community -- among them patients, some doctors and researchers -- question the ability of those tests to accurately diagnose an infection, leading many people with symptoms to seek testing at certain labs outside Canada, usually in the U.S., which use a different protocol.

"Lyme disease in Canada is probably under-reported, under-diagnosed and as a result it's undertreated," said Hawkins, who calls the effects of persistent infection "profoundly disabling."

Rossana Magnotta can attest to that: about five years after symptoms began, her husband was unable to walk unassisted, had severe pain and could no longer write or communicate verbally.

Though Magnotta, a former medical lab technician, suspected Lyme from the outset of her husband's illness, she couldn't convince neurologists they consulted to consider that possibility.

"When I was suffering with him every step of the way, we were like in a black hole."

When he did finally get diagnosed, following testing in the U.S. and Germany, and began long-term antibiotic treatment, her husband did begin to improve -- but it was too late to reverse the widespread damage the infection had inflicted, resulting in his death.

Magnotta hopes the Guelph research lab will eventually mean other patients and their families won't have to go through the same kind of suffering.