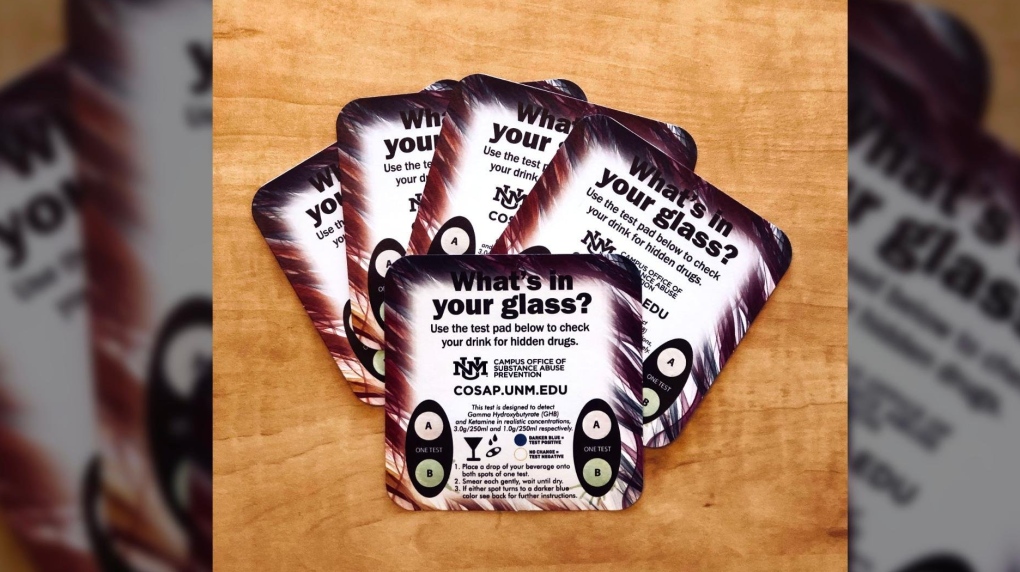 College-aged women are as much as four times more susceptible to sexual violence than women of all ages. With that in mind, the University of New Mexico is hoping some drink coasters can potentially prevent the nightmare of sexual assault for students.

Students can stop by the college's Campus Office for Substance Abuse Prevention to pick up free coasters designed to detect if two common date rape drugs are present in drinks.

The coasters test for gamma hydroxybutyrate (GHB) and ketamine, two of the most common date-rape drugs, according to the National Institute on Drug Abuse. GHB is a depressant that causes drowsiness and nausea; ketamine is an anesthetic that reduces feeling and can distort victims' senses.

To test with the coasters, users take a drop of their drink and rub it on two small circles (one tests for GHB, another for ketamine) and wait to see if the circles' colours change. A blue circle means the drink is spiked.

Randall Sterling, the office's senior research scientist, said student fees pay for the coasters, which are shared with campus groups like Greek organizations, too.

The coasters can be a small but crucial effort in curbing date rape -- or even making potential predators think twice, he said.

"We hear tales. We all know someone (affected)," he said.

The prevalence of sexual assault on college campuses can be difficult to quantify. In a campus climate survey of nine public, private and community colleges and universities, the U.S. Department of Justice found as many as 51 per cent of women said they'd been sexually assaulted or raped by their senior year.

The use of date-rape drugs in sexual assault is even harder to prove. A survey from Alcohol.org, a branch of the American Addiction Centers, found that 56 per cent of women and 44 per cent of men said their drinks were spiked without their knowledge. Nearly 40 per cent of respondents said it happened more than once.

But the majority of respondents -- 41 per cent -- didn't know what substances had been used to drug them.

That's because more than 100 different substances have been used in reported date rapes, according to the Society of Forensic Toxicologists. Most of them are colorless and odorless and easily dissolve into liquid.

These drugs can leave the body within 12 to 72 hours after their consumption, according to the Rape, Abuse & Incest National Network (RAINN). The organization recommends victims who suspect they've been drugged and assaulted get to a hospital immediately to complete a sexual assault forensic exam.

If it's impossible to make it to a hospital, RAINN suggests victims save their urine in a sealed container and freeze or refrigerate it.

DrinkSafe Technologies developed the drug detector coasters sold to the University of New Mexico, owner Lance Norris told CNN. At just US$0.85 each, they're cheaper than most any drink at a bar.

But the coaster doesn't promise to be definitive: The fine print on the back warns users that the blue circle doesn't guarantee the drink contains either drug, but that "there is something detected that should not be present."

And if a drink is blue in hue, the coaster may show a false-positive.

Studies about the efficacy of devices like DrinkSafe coasters are years old and show mixed results, but if they heighten college students' awareness about their risk, Sterling said, then they're worth using.

"Hopefully one day we won't have to even use these," he said. "But I think it's good for students to realize that these things are out there."