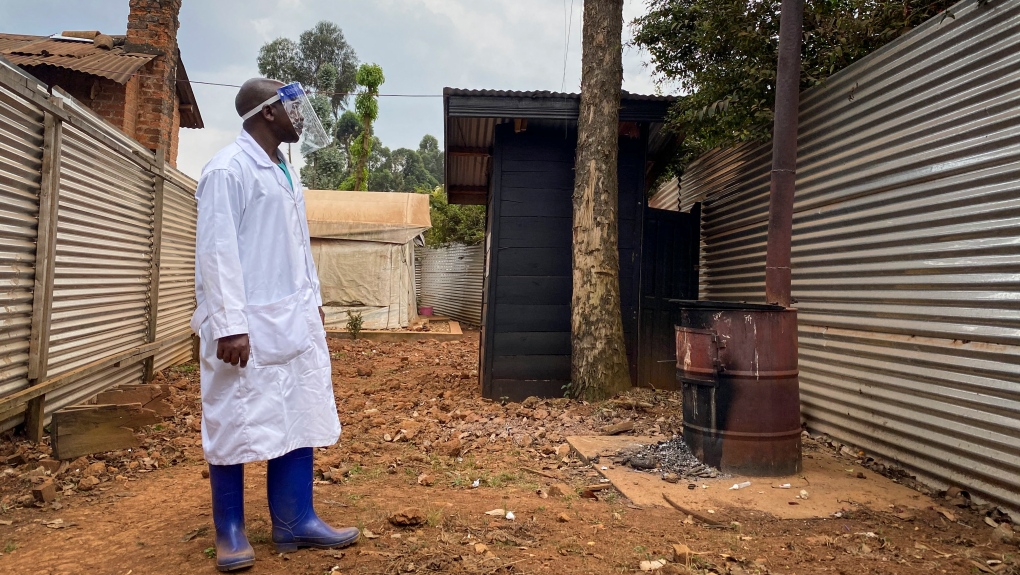 A medical worker checks the quarantine area of the Matanda Hospital in Butembo, where the first case of Ebola died, in the North Kivu province of Congo Thursday, Feb. 11, 2021. (AP Photo/Al-hadji Kudra Maliro)

LONDON -- The World Health Organization said Wednesday that officials have begun vaccinating people in eastern Congo against Ebola, after it was confirmed last week that the disease killed a toddler.

The UN health agency said in a statement that people at high risk of catching the disease, including the young boy's family members and health workers, would receive first doses of the vaccine made by Merck.

WHO said about a thousand doses of the vaccine arrived in Goma, the capital of Congo's North Kivu province, and 200 doses were sent to Beni, a city near the area where the first case was identified last week.

The new Ebola outbreak that started Oct. 8 comes after a devastating epidemic that began in 2018, when the disease killed more than 2, 200 people in the conflict-ridden region - and when more than 80 Ebola responders working under WHO were found to have sexually abused people during the agency's efforts to stop the disease.

Among the 15 officials WHO dispatched to Congo this month was an expert in preventing sexual abuse and exploitation, the agency said.

“The expert will brief WHO employees and partners on how to prevent any inappropriate and abusive behavior,” WHO said.

An Associated Press investigation in May found senior WHO management was informed of multiple instances of sexual abuse but failed to act. The people accused included a doctor who offered women jobs on the vaccination team in exchange for sex.

The AP also found that WHO managers signed off on a contract to pay off a woman allegedly impregnated by a WHO doctor, details that were confirmed in a report issued last month by a panel examining sexual abuse during the earlier Ebola response.

The panel found more than 80 officials working on WHO's Ebola response sexually abused people in Congo and described fundamental structural and cultural problems in the agency.

WHO Director-General Tedros Adhanom Ghebreyesus said he had no knowledge of the sex abuse claims until they were published in the press, despite having visited Congo 14 times during the outbreak and taking personal responsibility for overseeing the response.

Numerous countries and donors have since pressed WHO to overhaul its emergencies response system and to punish staffers connected to the abuse; no senior managers have since been dismissed, and one official who was informed of the abuse in writing was later promoted.