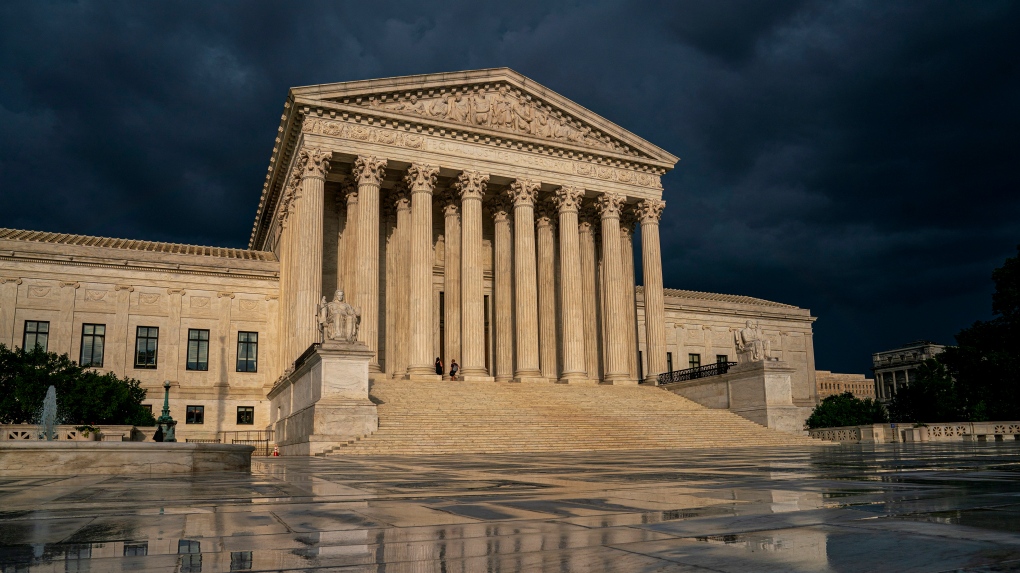 In this June 20, 2019 file photo, the Supreme Court is seen under stormy skies in Washington. (AP Photo/J. Scott Applewhite)

Roberts did not say enough to tip his hand in an hour of spirited arguments at the high court.

The court's election-year look at a Louisiana dispute could reveal how willing the more conservative court is to roll back abortion rights. A decision should come by late June.

The outcome could have huge consequences at a time when several states have passed laws, being challenged in the courts, that would ban abortions after a fetal heartbeat is detected, as early as six weeks.

The justices are weighing a Louisiana law requiring doctors who perform abortions to have admitting privileges at a nearby hospital. A federal judge found that just one of Louisiana's three abortion clinics would remain open if the law is allowed to take effect. The federal appeals court in New Orleans, though, upheld the law, setting up the Supreme Court case.

Justice Ruth Bader Ginsburg noted, as she had before, that "among medical procedures, first trimester abortion is among the safest, far safer than childbirth." The abortion clinic in Shreveport at the heart of the case reported transferring just four patients to a hospital out of roughly 70,000 it has treated over 23 years, Justice Elena Kagan noted.

Justice Samuel Alito said the clinic had once had its license suspended, in 2010.

Perhaps the biggest question is whether the court will overrule a 2016 decision in which it struck down a similar law in Texas. Since then, Donald Trump was elected president and he appointed two justices, Neil Gorsuch and Brett Kavanaugh, who have shifted the court to the right. Even with those two additions to the court, Roberts almost certainly holds the deciding vote.

When the justices temporarily blocked the Louisiana law from taking effect a year ago, Roberts joined the court's four liberal justices to put it on hold. Kavanaugh and Gorsuch were among the four conservatives who would have allowed the law to take effect.

Those preliminary votes do not bind the justices when they undertake a thorough review of an issue, but they often signal how a case will come out.

In more than 14 years as chief justice, Roberts has generally voted to uphold abortion restrictions, including in the Texas case four years ago.

It is for now unclear whether Roberts' outlook on the Louisiana case has been affected by his new role as the court's swing justice since Justice Anthony Kennedy's retirement, his concern about the court being perceived as a partisan institution and his respect for a prior decision of the court, even one he disagreed with.

One possible outcome is that Roberts and the other conservative justices could find a way to allow Louisiana to enforce the law, without overruling the decision from 2016 in which the court struck down a similar law in Texas. One avenue raised by lawyers for the state and the Trump administration is that the doctors didn't try hard enough to work out arrangements with the hospitals, even though the trial court found that doctors failed to secure admitting privileges at 15 hospitals over an 18-month period.

That result would be a defeat for abortion rights advocates who have argued that the laws are virtually indistinguishable. But it would allow Roberts something of a middle ground between taking a big step to limit abortion access and reaffirming the court's abortion rulings.

Roberts asked the same question, in slightly different form, to each of the three lawyers who argued before the court. The court in the Texas case found there was no benefit to the women the law was ostensibly intended to help and struck it down as an "undue burden" on women's right to an abortion in violation of the Constitution.

"I understand the idea that the impact might be different in different places, but as far as the benefits of the law, that's going to be the same in each state, isn't it?" Roberts asked Louisiana Solicitor General Elizabeth Murrill.

Roberts' inquiry seemed to dovetail with questions from Kavanaugh, whose interest was in discerning whether admitting privileges laws would still impose an ""undue burden" in a state that made it easy for abortion providers to get them.

"Could an admitting privileges law of this kind ever have a valid purpose, in your view?" Kavanaugh asked lawyer Julie Rikelman, representing the Shreveport clinic.

Rikelman replied: "No, Your Honor. The medical consensus against these laws is clear."

The court also has agreed to review whether abortion providers have the right to go into court to represent the interests of women seeking abortions. A ruling in favour of the state's argument that the providers lack the right to sue in these circumstances, known as third-party standing, would be a devastating blow to abortion rights advocates since doctors and clinics, not individual women who want abortions, file most challenges to abortion restrictions.

But apart from Alito, the justices did not seem especially interested in resolving the case on the standing issue.

Outside the court, protesters on both sides filled the sidewalks just as they have for earlier high court cases on abortion.

Inside, Justice Stephen Breyer sought to capture searing debate over the issue. "I understand there are good arguments on both sides. Indeed, in the country people have very strong feelings and a lot of people morally think it's wrong and a lot of people morally think the opposite is wrong," Breyer said, though he left little doubt he would vote in favour of abortion rights.