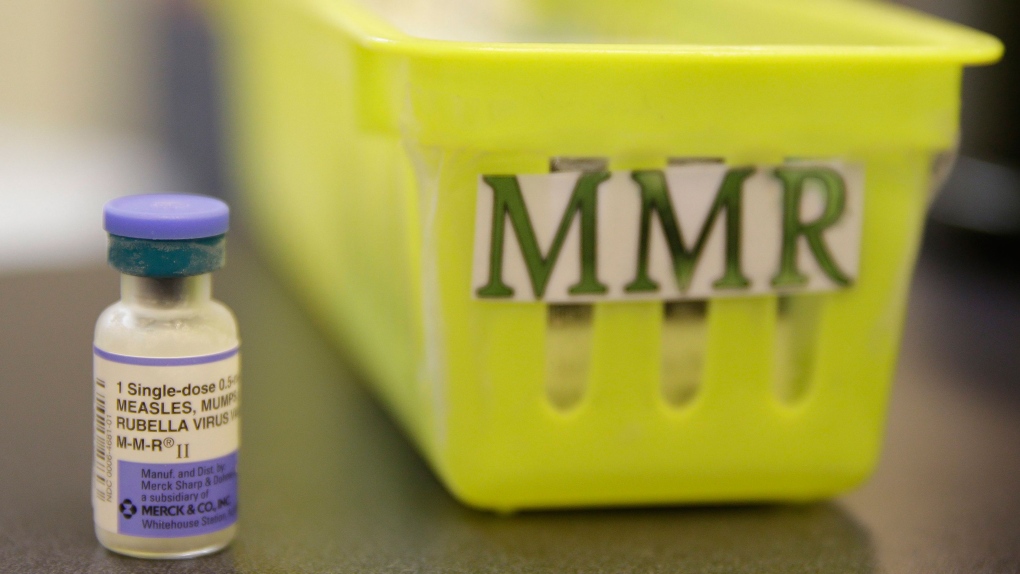 A measles vaccine is shown on a countertop at the Tamalpais Pediatrics clinic in Greenbrae, Calif., Friday, Feb. 6, 2015. (AP / Eric Risberg)

Two dozen confirmed measles cases are under investigation in the northwestern United States, providing the latest proof that a disease previously thought to have been on its way to eradication is once again a growing threat.

Public health officials in Clark County, Wash., said Wednesday that they were aware of 23 confirmed cases and seven suspected cases of measles had been identified in the county since Jan. 1. No deaths have been reported and only one case has resulted in hospitalization. A public health emergency has been declared.

A 24th case was confirmed Wednesday night in King County, which includes Seattle. Authorities there said a man who had recently travelled to Clark County had been hospitalized for the virus.

Officials said people may have been exposed to the virus in more than 20 public locations, including the Portland International Airport, a Portland Trail Blazers NBA game, and Costco and Ikea stores in Portland, Ore. Although Clark County is in Washington, it borders Oregon and is located a short distance away from Portland.

Twenty of the 23 patients in Clark County are known to have been unvaccinated. The immunization statuses of the other three patients there and the one in King County have not been verified.

Measles was declared eliminated in the U.S. in 2000, meaning any new cases of the virus on U.S. soil past that point had originated outside the country and the virus was not able to survive in the U.S. on its own. Likewise, Canada has not had endemic measles since 1998.

Despite the elimination, measles caseloads in the U.S. have risen since the early 2000s. There were 349 cases reported in the country in 2018 – more than any post-elimination year other than 2014, when there were 667. Twenty-nine cases of the virus were reported in Canadain 2018.

“The fact that we have had so many cases in 2018 is really quite discouraging,” Dr. Anthony Fauci, the director of the U.S. National Institute of Allergy and Infectious Diseases, told CNN in an interview, putting the blame for the outbreaks on parents choosing not to vaccinate their children.

“This is a completely avoidable situation.”

According to the U.S. Centers for Disease Control and Prevention, there were 17 separate outbreaks contributing to that country’s 2018 total, including three largely linked to unvaccinated people in Orthodox Jewish communities in New York and New Jersey.

Federal statistics show that 81 people brought measles back to the U.S. after travelling abroad, representing a post-elimination record.

Measles cases have been increasing significantly in Europe and other parts of the world. A 30 per cent increase was recorded globally between 2016 and 2017, but Europe saw a much sharper rise, with more than four times as many cases reported. The World Health Organization says reluctance toward vaccinations has played a major role in the resurgence of the virus, leading it to name vaccine hesitancy as one of its top 10 global health threats for 2019.

Is social media to blame?

A new report from the U.K. suggests false information about immunizations being spread online could contribute to vaccine hesitancy.

“With the dawn of social media, information – and misinformation – about vaccines can spread further and faster than ever before and … this may, unfortunately, be advantageous for anti-vaccination groups,” Shirley Cramer, chief executive of the Royal Society for Public Health, writes in the report.

“Finding new and innovative ways to counteract ‘fake news’ about vaccines is likely to be a major battle to be fought in the coming years.”

Social media posts promoting anti-vaccination views, particularly from celebrities and other trusted people, are often cited as a cause of recent decreases in vaccination rates.

“Parents can actually be misled into thinking that the vaccines are going to be causing harm to their children as opposed to protecting their children,” Fauci said.

The study found that adults across all age groups report seeing more negative information than positive about vaccinations on social media, despite the medical consensus that they are safe and effective, and called for social media platforms to find ways to prioritize health information from reputable sources.

Health Canada recommends that all children and adults born after 1970 receive measles vaccinations. Measles immunization is part of the MMR and MMRV vaccinations routinely administered to young children.