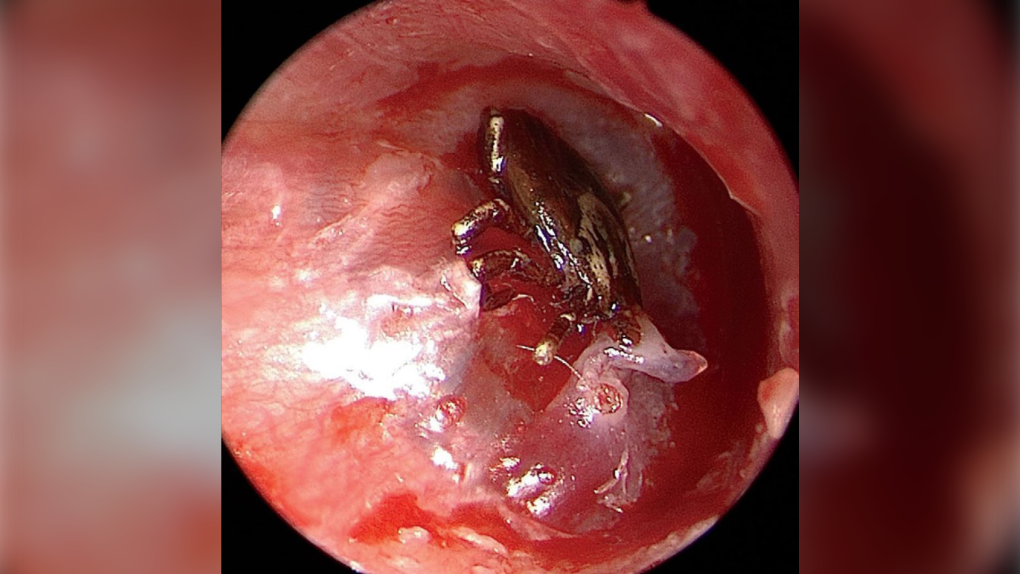 Doctors in Connecticut discovered a tick attached to the membrane of a 9-year-old boy’s right eardrum after he complained of buzzing noises. (The New England Journal of Medicine ©2019)

Doctors in Connecticut discovered a tick attached to the membrane of a 9-year-old boy’s right ear drum after he complained of buzzing noises.

The boy had been playing outside at school in Connecticut when he likely came in contact with the tick, which was later identified as an American dog tick (Dermacentor variabilis). It was found on the boy’s inflamed right eardrum, or tympanic membrane, but he experienced no pain, tinnitus or loss of hearing, doctors said.

After an initial attempt to remove the arachnid in an office with an operative microscope, the boy was transferred to an operating room.

“The tick was again seen attached to the tympanic membrane,” doctors wrote in a May 1 case report for the New England Journal of Medicine. The head was buried beneath the protective outer layer of the eardrum, they added. The patient has recovered and showed no signs of disease, doctors said.

“One month later, the patient was doing well,” they wrote. “He had no fever or rashes, and the tympanic membrane had healed well.”

The risk of contracting Lyme disease is greater if a tick is infected with the Borrelia burgdorferi bacteria and buries its head under a person’s skin for at least 36 hours. The disease is named after the shoreline town of Lyme in Connecticut, the state where the 9-year-old boy lives. Luckly for him, the tick found in his ear is not the type that can transmit Lyme disease, according to a clinical scholar at McMaster University.

Varied symptoms can occur within a few days to a month, but usually within one to two weeks, and may include: fever, chills, headache, joint and muscle pain, joint swelling, fatigue, and facial paralysis. The signature sign that Lyme disease may be present is the “bullseye rash,” formally called Erythema migrans, which appears on 70 to 80 per cent of people with Lyme disease at the site of a bite roughly three to seven days later.

A 9-year-old boy reported hearing buzzing noises and having a sensation of a foreign body in the right ear. https://t.co/srnvTt9fR8

As weather warms up around North America, tick surveillance is increasing. In Ontario on Thursday, Toronto Public Health held a press conference on programs to identify ticks with Lyme disease. The city had nearly 80 cases of confirmed and probable Lyme disease in 2017, and closer to 40 last year, the agency said. But cases of Lyme disease have been growing nationally for years, from just 144 in 2009, to more than 2,000 in 2017, according to government data.

Ticks can be difficult to spot since they vary from the size of a poppy seed to a pea, said Christine Navarro, Toronto Public Health associate medical officer of health, at the press conference. If a tick is found, experts suggest a tweezer is the best tool: grasp its head with close to the skin and slowly pull it straight out without twisting or crushing the tick.

Navarro outlined a series of precautions people can take if they expect to be outside in wooded and bushy areas, where ticks are most often found.

Ticks are primarily found in wooded, bushy areas with tall grass and leaves on the ground. Properties should be maintained regularly by mowing lawns often, and removing fallen leaves, brush and weeds from the lawn edge.