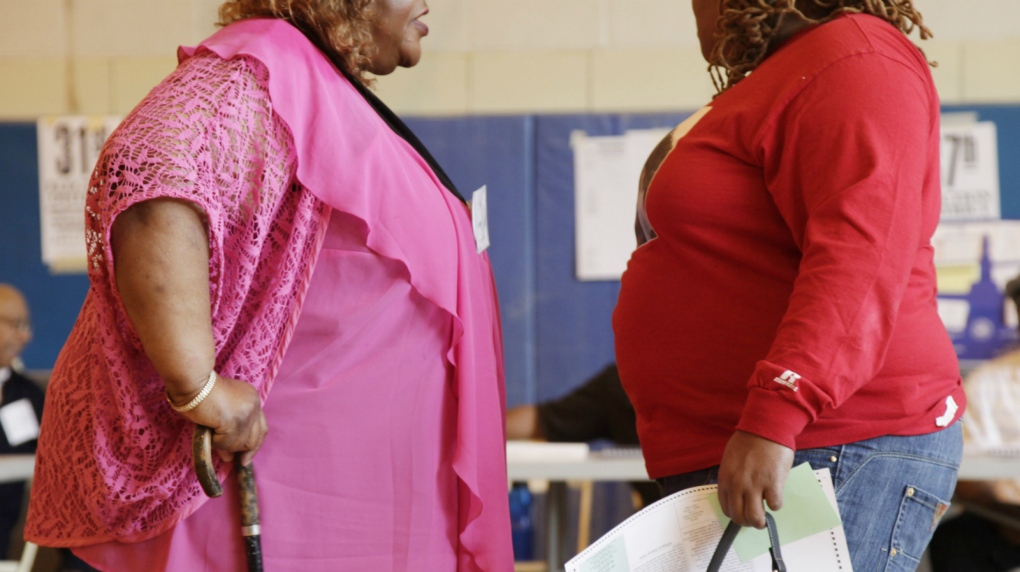 Two women speak to each other in New York on June 16, 2012. Big companies are considering blending genetic testing with coaching on nutrition and exercise to help workers lose weight and improve their health before serious conditions like diabetes or heart disease develop. 9ap / Mark Lennihan)

Your employer may one day help determine if your genes are why your jeans have become too snug.

Big companies in the U.S. are considering blending genetic testing with coaching on nutrition and exercise to help workers lose weight and improve their health before serious conditions like diabetes or heart disease develop. It's a step beyond the typical corporate wellness programs that many companies are using to make workers more aware of their risk factors and improve their health.

Genetic testing in corporate wellness programs also is relatively uncharted territory. Many employers and insurers cover these tests and counseling for medical reasons, like helping people determine if they are more prone to certain cancers. And earlier this year, President Obama asked Congress to approve spending on medical research into using a patient's genes to tailor care.

Mixing generic testing into a wellness program may create a tool attractive to employers desperate to cut health care costs, one of the biggest expenses in a company's budget. But employee benefits experts have doubts that such a novel approach will gain momentum. It first has to conquer steep challenges like employee worry about sharing such sensitive information and employer skepticism about its effectiveness.

"They are waiting for evidence that this genetic testing will change risks," said Dr. Jeff Levin-Scherz, a senior consultant with the benefits consulting firm Towers Watson.

Sparking the push to add genetic testing into corporate wellness offerings is a new program from the health insurer Aetna and Newtopia, a small Canadian company that creates personalized health-improvement programs. Their offering uses data from initial wellness program steps like physicals or blood tests to figure out which employees are vulnerable to metabolic syndrome.

That's a group of conditions like high blood sugar, poor cholesterol or a big waistline that, when they occur together, increase a patient's risk for heart disease, stroke and diabetes.

Those people are invited to get testing that analyzes a narrow band of genes that can tell patients things like how their body processes carbohydrates or fats, or if they have a genetic marker tied to compulsive eating. Patients then work with a coach to combine that information with a plan to improve their health.

Aetna and Newtopia are selling their program to the insurer's biggest employer customers, and they are seeking to sign up to six companies this year. Spokeswoman Michelle Grant said the cost for companies will be on par with other disease prevention programs that attempt to improve a person's health using live, individual coaching and apps. She did not provide specifics.

Aetna appears to have this niche to itself for now. None of the other major health insurers in the United States offer genetic testing as part of a wellness program.

The new program was tested on employees at Aetna and The Jackson Laboratory, a Bar Harbor, Maine, company. Scott Craig, a maintenance worker at the laboratory, decided to give the test a shot last year because his weight had soared to 335 pounds and his blood pressure and blood sugar levels were up.

The 53-year-old mailed a saliva sample in for analysis. The result? He has no genetic traits that help explain his weight gain.

"In other words, I got nothing to blame," he said. "Finding that out, oddly enough, seemed to motivate me."

Craig connected with the program's health coach, who helped him figure out how to squeeze in exercise three times a week and improve his diet. Newtopia also started sending personalized vitamin supplements and offering online contests that taught Craig how to track his daily activities and think of everything he did as a way to burn calories.

Craig was one of 130 laboratory employees invited to try the program. A total of 28 started. More than a year later, only 19 still participate. Most have lost 7 percent of their body weight or more, said Wayne Gregersen, who works in the company's compensation and benefits department.

Gregersen, who estimates that the program costs $400 to $600 more per person than a similar, high-end health coaching option, liked the results. But he said the company must learn why participation was so low, especially since the laboratory focuses on genetic research.

He also said he has a hard time understanding the value of genetic testing but plans to give the Aetna-Newtopia program another year.

It may take several years before a company sees a drop in health care costs from changed employee behavior, said Rose Stanley, a practice leader at WorldatWork, a nonprofit human resources association.

Companies have to attract workers who will not only realize that they have a problem but also will work to fix it even if they fail at first, Stanley said.

But before companies can even see results, they have to sign up employees. That's a challenge for any wellness program, let alone one that includes genetic testing.

Many employees just don't like sharing personal details, and genetic information carries a lot of potential for abuse, said Lisa Schlager, a vice president of community affairs with Facing Our Risk of Cancer Empowered, a non-profit advocacy group for people with hereditary dispositions to cancer.

She said any genetic information collected for a wellness program should be used in a limited scope, and the plan must come with strong protections to keep employers from seeing an individual's results and penalizing workers.

"That's where people are starting to get a little nervous," she said.

Newtopia runs the wellness program and doesn't share an individual's results with either the employer or the insurer, company CEO Jeff Ruby said.

A federal law also protects against genetic discrimination in health insurance and employment.

In addition to employee concerns, there are questions about whether genetic testing can be helpful in dealing with metabolic syndrome. Mayo Clinic endocrinologist Dr. Michael Jensen says, as far as he knows, genetic testing isn't used as part of care.

He said genetic factors linked to obesity are hard to analyze, and more than 95 percent of weight gain is tied to factors like diet or exercise.

"Genes don't explain that much of the variability," he said.

Still, genetic testing could motivate some to improve their health, even if it sheds little light on their condition. Craig, the Jackson Laboratory worker, has dropped 50 pounds since he started working with his health coach.

"I've come a long way since then," he said. "Two hundred eighty five pounds may sound like a lot to you, but to me it's really good."