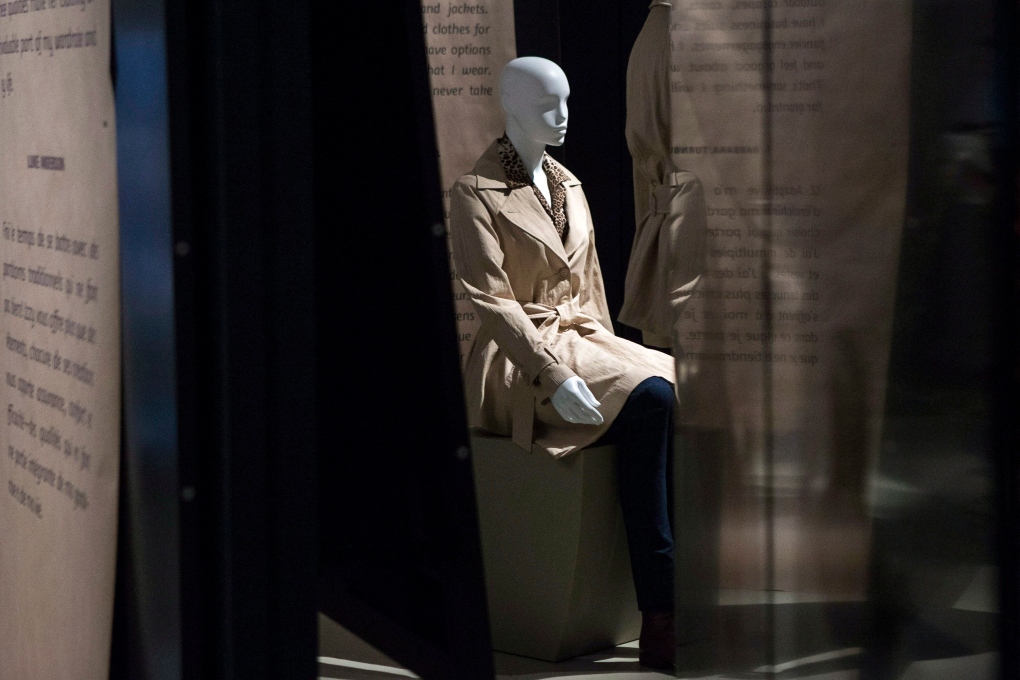 TORONTO -- Izzy Camilleri has seen her signature creations featured on runways and on the big screen, but a new exhibit is offering a unique platform for the Canadian designer by showcasing her innovative fashions for people using wheelchairs.

"Fashion Follows Form: Designs for Sitting" opens Saturday at the Royal Ontario Museum in Toronto. Camilleri's creations are a focal point in the exhibit, which features items from her IZ Adaptive clothing line for both men and women.

"It's huge. It's an honour," Camilleri said in an interview during a preview of the exhibit.

"It's really great to be able to share my story and my history, and put (out) the work I'm doing now, which is very important for people to know about that need it."

Journalist Barbara Turnbull is an honorary co-chair of the exhibit and has a special connection to Camilleri as the designer's first seated client.

She became quadriplegic in her teens after being shot during a convenience store robbery. In need of a shearling cape to keep her warm during the winter, the Toronto Star reporter was referred to Camilleri by the newspaper's fashion editor at the time, Bernadette Morra.

"It was from that point on that I started to learn about some of the challenges that people have in a wheelchair combined with a disability," Camilleri recalled.

"It was very eye-opening because I never realized that people had any issues with getting dressed when they're in their chairs. So that was the seed that was planted."

She launched IZ Adaptive in 2009. Initially, learning to create clothing for seated clients presented a fresh set of challenges and considerations for Camilleri.

"When you're paralyzed, for example, the risk of pressure sores is huge. And sometimes you can get pressure sores from your clothes," she said. "I needed to learn how the clothes needed to be cut and even about seams and bulk and stuff like that. You could actually hurt someone if you don't do it properly.

To help further illuminate how the items are customized for individuals in wheelchairs, a selection of the Toronto-based designer's works are displayed in both seated and standing positions. A classic trench coat is drafted in an L-shape following the line of the body while seated, while a formal suit features added length to the back and less in the front body area to accommodate the wearer.

Detailed descriptions accompany each item showcased, highlighting the meticulous work done to make them easier to wear, put on and take off. A prime example is a sleek leather jacket that separates into two pieces, lined with organic cotton knit for warmth and bearing zippers from the cuffs to elbow that are easier to open and close.

The exhibit also features some of Camilleri's other notable designs, including the silver fox coat worn by Meryl Streep in the fashionable flick "The Devil Wears Prada."

Alexandra Palmer, senior curator in textiles and costume at the ROM, said she never set out to showcase Camilleri's work. However, after leaving her yoga class one day, she recalled stumbling into Camilleri's shop where the designer explained the adaptive clothing concept.

"I was very struck with this idea, which was a fashion need that I never really thought about and has been ignored and not really addressed by the fashion industry," Palmer said. "As well, looking at her clothes and her cuts reminded me of historical shapes."

To that end, the ROM has also drawn on its own collection of 18th and 19th-century fashions created for the seated, L-shaped body to showcase alongside Camilleri's contemporary creations. An embellished evening cape cut to accommodate the bustle, and a tailored habit for riding are among the items taken from the archives.

Camilleri said she has IZ Adapative clients in the U.S., U.K. and Australia and has received feedback from clients expressing gratitude for its presence.

"Sometimes, it can be transforming for people because they've never been able to dress properly or they buy things that are too big because it's easier to get on -- but then they look all dishevelled," she said.

"It's allowed people to also ... be who they are. It gives them identity, it gives them dignity."

"Fashion Follows Form: Designs for Sitting" is on display in the Patricia Harris Gallery of Textiles & Costume at the ROM until Jan. 25, 2015.