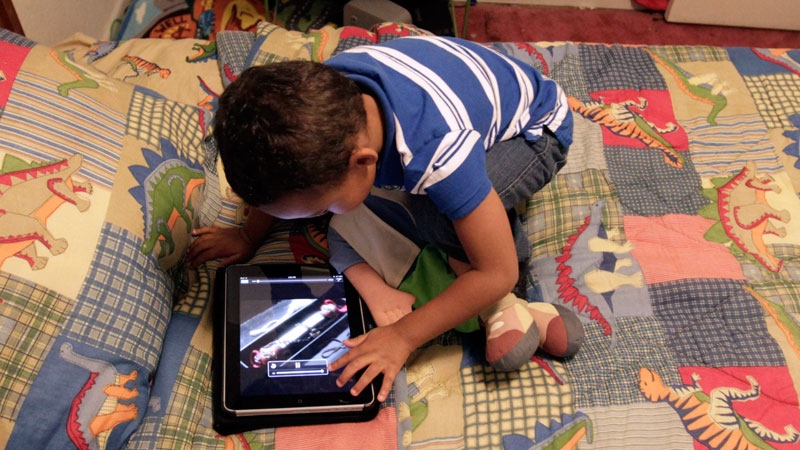 Smartphones and tablets are everywhere these days, but new Canadian research finds that the more time babies and kids spend on those screens, the more likely they are to have a speech delay.

The study, from a team at SickKids Hospital in Toronto, found that the toddlers and babies who spend a lot of time on screens have a higher risk they will take longer to learn how to speak.

On the positive side, there was no apparent link between device screen time and delays in other forms of communications, such as gestures, body language or social interactions.

The study’s lead investigator, Dr. Catherine Birken, a pediatrician and scientist at SickKids, says current guidelines from groups such as the American Academy of Pediatrics state that screen time for toddlers should be limited, while screen time for babies under 18 months should be discouraged.

But she says her team found that isn’t happening.

“We believe that the use of smartphones and tablets with young children has become quite common,” she said in a statement.

The study involved 894 children between the ages of six months and two years participating in TARGet Kids!, a practice-based research network in Toronto.

The team found that by their 18-month check-ups, 20 per cent of the children were using handheld devices for an average of 28 minutes a day, according to their parents.

They then used a screening tool to test for language delays and found that the more handheld screen time a child's parent reported, the more likely the child was to have delays in expressive speech – meaning the ability to not just understand, but to convey information or feelings using speech.

For each 30-minute increase in handheld screen time, researchers found a 49 per cent increased risk of expressive speech delay.

Her team’s findings are being presented at the 2017 Pediatric Academic Societies Meeting in San Francisco in a presentation is entitled "Is handheld screen time use associated with language delay in infants?”