This is what happens to your body over months in isolation 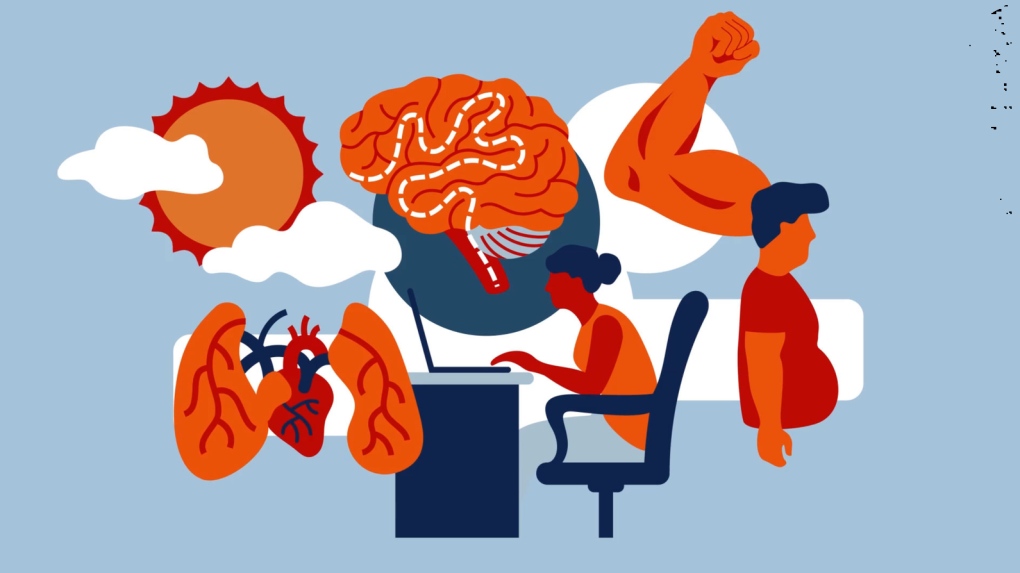 Being homebound for so long contorts the body, weakens the heart and lungs and even impairs brain function. (CNN)

Since the pandemic officially began in March, we've been told staying home is the best way to avoid catching COVID-19. And it is. But life in confinement can cause physical ailments on its own.

Being homebound for so long contorts the body, weakens the heart and lungs and even impairs brain function. The effects of life in isolation may stay with us beyond the pandemic's end (whenever that may be).

This is what half a year of isolation, staying home and staying sedentary can do to your body.

A week homebound, whether you're working, eating or sleeping, may feel comforting and necessary. But all the inactivity can undo hard-won progress.

That's because it can take months to build muscle and just one week to lose it. Humans, for all of our hardiness, also lose muscle more quickly the older we get, said Keith Baar, a professor of molecular exercise physiology at the University of California - Davis.

When you lose muscle, you're not necessarily losing bulk, but you are losing strength, which Baar said is one of the "strongest indicators" of how long you'll live.

"The stronger we stay, the easier it is for us to maintain our longevity."

Your heart and lungs get weaker

If you're not exercising, you're not raising your heart rate. And when your heart isn't pumping as hard, it gets weaker, Baar said.

The same thing happens to your lungs when you're inactive, said Dr. Panagis Galiatsatos, a pulmonologist from Johns Hopkins Bayview Medical Center. He said many of his patients have felt their breathing function deteriorate because they're no longer conditioned to exercise.

People with poor lung health are already considered more susceptible to coronavirus because it's a respiratory illness, so they're likely staying home to reduce their risk of infection. But if they're not moving and increasing blood flow to their lungs, then their preexisting condition might harm them anyway.

Exercise is the only key to improve both heart and lung function -- "Not a single medication can do that," Galiatsatos said. If it's not safe to leave the house, Baar recommends dancing or finding household objects for home strength training -- think milk jug deadlifts.

If you're home all day, every day, you're likely feet away from your pantry. Depending on your perspective, that's either convenient or dangerous.

With such easy access, your "feeding" window, or the period of time during which you eat most of your meals, might widen from 10 or 12 hours every day to 15 hours a day-- more than half the day, which could cause your insulin levels to spike. Insulin encourages fat storage and converting other fat molecules to fat, said Giles Duffield, an associate professor of anatomy and physiology at the University of Notre Dame who studies circadian rhythms and metabolism, among other subjects.

Weight gain during periods of intense stress is normal, and 2020 has been unrelentingly stressful. Weight gain becomes dangerous, though, when it turns into obesity. Then, your body might start to resist insulin, and chronic health issues like metabolic illness or diabetes may develop, Duffield said.

Your posture is affected

We all have a seated position we subconsciously sink into -- slumped forward, shoulders hunched; spine curled, neck bent; on your chest, elbows up.

But sitting and lying down all day can seriously affect your posture and strain your back, neck, shoulders, hips and eyes, said Brandon Brown, an epidemiologist and associate professor in the Center for Healthy Communities at the University of California - Riverside.

Brown suggests getting up from your seat once an hour, walking around and stretching for a moment. You might even lie on the floor and "let your back readjust," he said.

At least half of all Americans are skimping on vitamin D, which sustains bone density and keeps fatigue at bay. You're definitely one of them if you spend most of your day at home, curtains drawn, Duffield said.

Getting enough sunlight in the morning helps synchronize your body's circadian rhythm, Duffield said. So if you're shut in all week or working in the dark, your sleep might suffer, too.

Brown said as long as you're going on walks or exercising, doing yard work or other activities that drag you outside for a bit, you won't need to worry about getting enough sunlight. If you're unable to get out of the house or the weather won't permit you to, an artificial bright light can help your body retune in the morning, Duffield said, as can avoiding blue lights at night.

A sedentary lifestyle can slow your brain, too.

Exercise produces certain chemicals in the brain that break down toxins in the blood and even prevent them from going to the brain, where they can kill brain cells, Baar said.

Not exercising means you won't as efficiently break down amino acid byproducts that wind up as neurotoxins in the brain.

The effects of isolation are insidious -- like the pandemic, the physical symptoms after months of seclusion often aren't obvious until they become harmful or extreme.

It's possible, too, to stave off those symptoms before they set in for good.

Prioritizing your mental and physical health while staying home requires some work, but it's a healthier coping mechanism for uncertainty than staying stationary until COVID-19 is no longer a threat, health experts say. And when it's safe to live fully again, you'll be prepared.