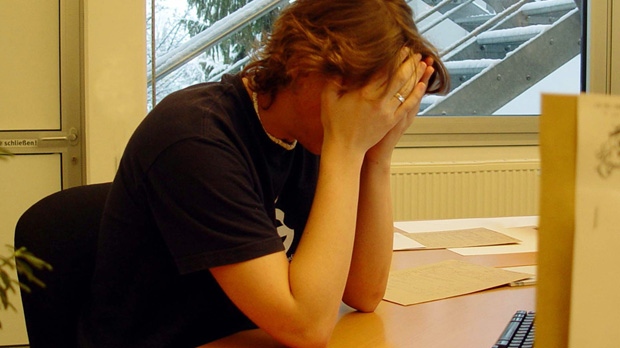 And a new study out of the University Toronto shows that people who are not in tune with their emotions often let these small events play into unrelated and big decisions.

It happens almost every day to each and every one of us: Those small anxiety-inducing events, from a frustrating, traffic-congested commute, to spilling coffee at your desk.

And a new study out of the University Toronto shows that people who are not in tune with their emotions often let these small events play into unrelated and big decisions.

"The emotions they have, which might be caused for any reason, can carry over to important decisions they make in their life," Stephane Cote said, a professor at U of T's Rotman School of Management, who co-wrote the study with Jeremy Yip of the Wharton School at the University of Pennsylvania.

One experiment Cote and his partner undertook involved a group of undergraduate students.

Students were first given a test on their general emotion-understanding ability, known as the Mayer-Salovey-Caruso Emotional Intelligence Test. Some students were then put into what researchers had determined was an anxiety-inducing situation: told they had 60 seconds to mentally prepare a speech.

In this increased state of anxiety, students were then asked whether they wanted to sign up to get the flu shot at the campus clinic after having read a fact sheet about the flu.

Cote says that students with a low degree of emotional intelligence actually signed up for the flu shot in the highest numbers. But this, researchers determined, was not due to a genuine concern for their health, but rather a result of the anxiety they had about having to prepare a speech.

"There's a finding when people are anxious they're too careful," Cote said.

Students with a high degree of emotional intelligence were actually less likely to sign up for the flu shot. The conclusion is that while they had made a riskier choice, it was also more rational, based solely on the decision in front of them.

(Perhaps another tidbit to be gleaned from the study: university students really, really don't like getting shots.)

But arguably the most interesting finding was that another group of students with low emotional intelligence -- once made aware by researchers that their anxiety had nothing to do with the decision at hand -- were less likely to sign up for the flu shot than those who hadn't been told this.

The conclusion: simply being made aware that a past event has no relation to current circumstances has an effect on decision making.

And with our financial system predicated on companies and individuals often having to take risks -- which often lead to big returns -- the research gives us insight into why investors might become risk-averse.

It might also help us with our personal relationships. For example, you might stop to ask yourself why you got mad at our spouse last night. (Perhaps it was that flat tire you got on the way home from work.)

The research can also be applied to the political arena.

There's no question the mayor has engaged (admittedly) in some questionable behavior in recent weeks, including making a lewd comment about oral sex.

But Cote said it could be argued that Ford's decision to make that comment stemmed from related attacks against him the previous day. Perhaps, just perhaps, Ford was actually in an emotionally-aware state when he said what he said.

Cote thinks, however, that his research could be applied to how city councillors might make decisions in the near future, specifically related to the perceived damage to the city in the wake of the scandal.

For example, when council is restored to normalcy, and an item comes to the floor that is part of the Ford agenda, will councillors now be more likely to vote against it simply because they're angry at Ford?

For councillors with lower emotional intelligence, this could be something to look out for.

"Anger could lead to people retaliating, to make something they see unfair more fair, and might influence policy decisions," Cote said.  "Even though the policy decisions have nothing to do with the cause of the anger."