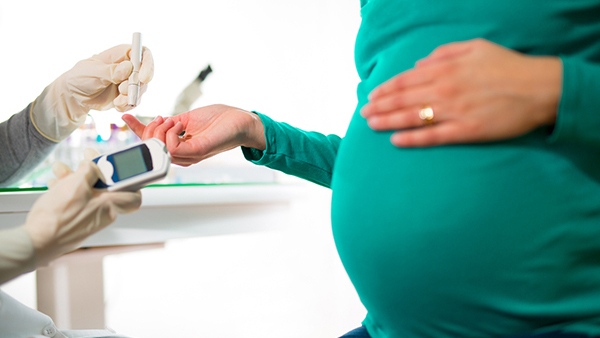 Women considered at risk of developing gestational diabetes will usually have their fasting blood glucose levels tested in the first trimester of pregnancy or before conception. (Jovanmandic/Istock.com)

Girls who start their periods at age 11 or younger are 50% more likely to develop gestational diabetes, according to a study published in the American Journal of Epidemiology.

Gestational diabetes is a form of diabetes in which the body does not produce enough insulin to regulate levels of sugar in the blood during pregnancy. It affects 10% of women in the USA and generally arises in the second trimester of pregnancy, leading to risks for mother and baby (excessive weight and growth).

For pregnant women with no known risk factors (obese or overweight, family history, maternal age over 35), gestational diabetes is generally only explored if an excessive quantity of amniotic fluid (hydramnios) is detected or if the fetus is an abnormally large size (greater than or equal to the 97th percentile).

Women considered at risk of developing gestational diabetes will usually have their fasting blood glucose levels tested in the first trimester of pregnancy or before conception.

Women who are overweight or obese can be encouraged to lose weight prior to conception to help reduce the risk of developing gestational diabetes. However, the scientists also suggest that hormonal changes could be linked to a higher risk, although more research in the field is required.

The early onset of puberty, which has many contributing factors and affects more and more young girls, could be a significant marker for several adverse health outcomes in adult life, including gestational diabetes.

In conclusion, the researchers advise health practitioners to pay particular attention to women who started their periods early when evaluating the risk of gestational diabetes.