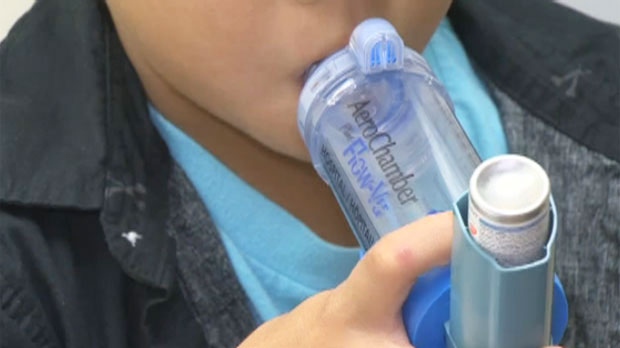 Alex Louie, a 10-year-old with asthma, uses his puffer during a medical visit.

A new large-scale meta-analysis looking at more than 50 years of research has found no link between child care in early life and an increased risk of asthma in children.

Led by researchers at University of California San Francisco and UCSF Benioff Children's Hospital San Francisco, the meta-analysis analyzed 32 peer-reviewed studies published from 1964 to 2017 that looked at the incidence of asthma and wheezing in children attending child care facilities in pre-kindergarten years.

Recent research has provided mixed results as to whether there is an association between early child care attendance and childhood asthma and wheezing.

However, in their analysis the team found that rather than increasing the risk of asthma, attending a child care facility could actually had a protective against asthma in children ages 3 to 5, associated with a 34 percent lower chance of developing the condition.

"The early benefit of child care exposure can potentially be explained by the hygiene hypothesis," said senior author Michael Cabana. "This theory suggests that lack of exposure to infectious diseases commonly found in child care settings may decrease the risk of allergic diseases, including asthma."

The team also found that early child care did not increase asthma risk for children aged 6 to 18, although it did was not seen to sustain the same protective effect found in children age 3 to 5.

In addition, the researchers also found that infants age 2 and under in child care were nearly twice as likely to experience wheezing.

However, Cabana said wheezing may not be anything to worry about, commenting that, "There's a saying that 'all that wheezes is not asthma.' Wheeze is a common presentation of viral airway infections that is seen frequently in young children in child care. Bronchiolitis, for example, is found in up to one third of children 2 and under. But it doesn't necessarily lead to asthma."

Although the new findings confirm some earlier studies, and contradict others, first author Alicia Swartz commented that, "we hope it will provide some reassurance to working parents."

The results can be found published online in the Journal of Asthma.