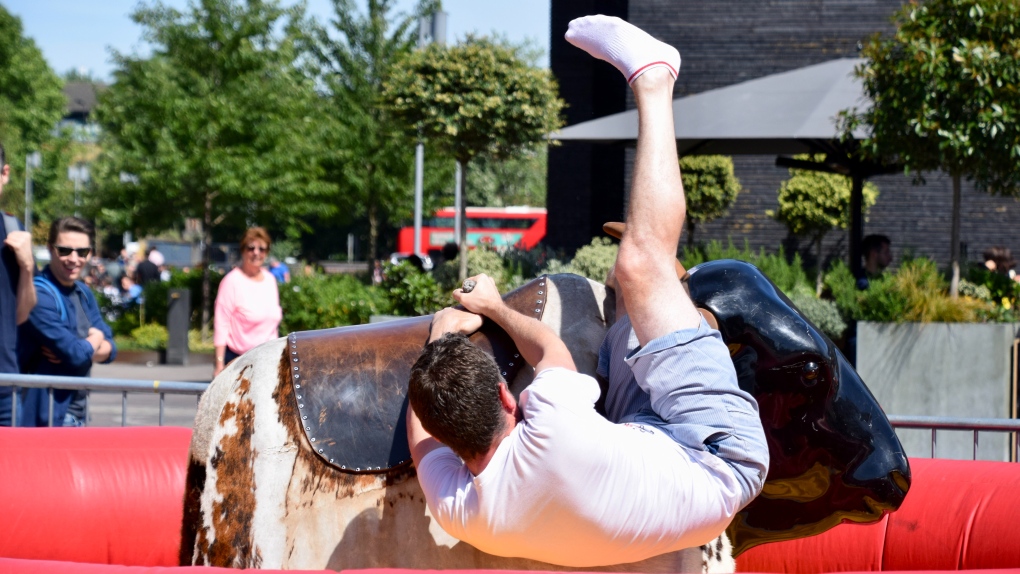 A mechanical bull for your child’s birthday party may be more of a hit with the kids than you were expecting — and not in a good way, a new study says.

According to a paper that looked at three incidents involving children falling from or being struck by a mechanical bull, described in the journal BMJ Case Reports, the bouncy beasts can pose an avoidable risk to young children.

All three were treated at Children’s Hospital Los Angeles in Los Angeles, Calif.

The ages of the children involved were not included, but all three were described as being in “early childhood.”

In the first example, a male child was taken to the emergency department with severe pain in his right elbow after falling off of a mechanical bull at a private function onto a padded surface.

He had not worn a helmet or any other safety equipment, and his elbow had swelling and wasn’t able to move as much immediately after the fall.

It was determined that he had sustained a common elbow fracture seen in young children, which was treated the following day so he could be sent home.

In the second example, another male child struck his head after falling off a mechanical bull that was being operated by “adolescent partygoers.”

He hit his head against a metal surface when he fell, and immediately began crying. He hadn’t been wearing a helmet or any other safety equipment.

He was able to walk after the injury and was brought by ambulance to an outside hospital, where medical workers stapled the wound in his head closed. However, that wasn’t the end of his night — after he was stapled, he vomited twice and was taken to another hospital by helicopter.

There, he received CT scans that found a mild skull fracture. He was sutured up, and admitted to the ICU for monitoring before being discharged three days later.

“On follow-up more than one year after injury, the patient had made a full physical recovery, however the parent reports he is traumatised by the incident, becoming agitated if he sees similar rides, such as merry-go-rounds,” the paper stated.

The third case study may be the most severe — in this case, a female child was struck twice on the head due to a fall from a mechanical bull.

First, she struck her head when she fell, and then, while she was attempting to stand up, the still-moving bull hit her in the head a second time.

She wasn’t wearing a helmet or other safety equipment, and started crying right after the injury, with a visible lip abrasion and blood on her head.

She was assessed at an outdoor hospital, where she vomited once, and then was taken to another hospital to get checked out for a skull fracture.

CT scans showed that there was a bone fracture that displaced the left parietal bone by two millimetres, and localized bleeding in her skull. There were a couple other fractures that hadn’t displaced bones as well.

She was monitored for the next few days at the hospital, where she suffered episodes of nausea and vomiting.

“Despite the significant neurological injury, she was successfully managed without surgical intervention and subsequently discharged home on hospital Day 4,” the study stated.

Three weeks later, in a check-up, she was still complaining of headaches.

On the Injury Severity Scale, she received a 17, compared to a nine in the second case and a four in the first one.

The hospital that looked at these three patients contacted eight local vendors who operate mechanical bulls in Los Angeles to ask what their safety precautions and rules are.

What they found was that rules varied widely depending on vendor.

“Rider age and height requirements vary greatly across regional vendors, with two vendors allowing children three years old to ride alone, two vendors only requiring riders to be able to reach the handlebar, and one vendor with no age or height minimums,” the paper stated. “Of the eight vendors contacted, only one vendor reports a definitive age or height restriction that would have prevented all three of these children from riding.”

None required certain safety equipment for kids, and only one vendor used the weight of a child as an indicator to restrict the maximum speed of the bull.

The hospital reported the details of the childrens’ cases to the U.S. Consumer Product Safety Commission.

“Parents may expect mechanical bulls to have a similar safety profile to conventional coin-operated ‘kiddie rides’ or carousels, however the latter have slow, predictable motion in only one plane, and allow parents to stand at the child’s side to prevent falls,” the study pointed out.

Mechanical bulls, on the other hand, are designed to move and spin in jerky, unpredictable ways, and parents aren’t able to stand near enough to prevent a child from falling.

The authors of the case report are calling on the CPSC to better regulate these products to prevent children from being injured.