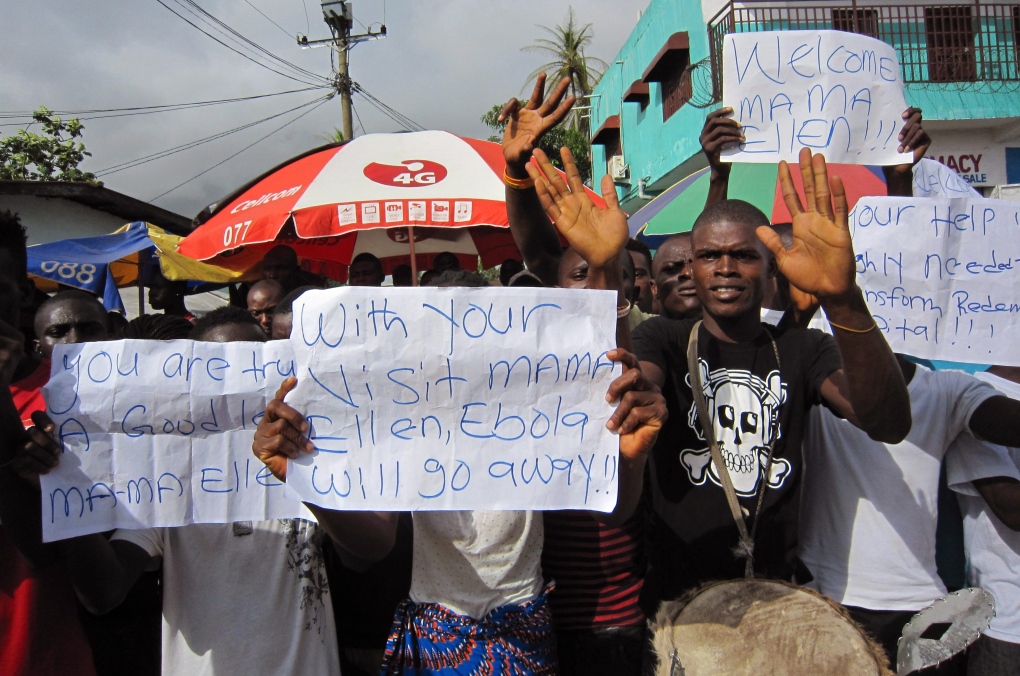 People protest outside a hospital in Monrovia, Liberia on June 17, 2014. A senior official for Doctors Without Borders says the Ebola outbreak ravaging West Africa is 'totally out of control' and that the medical group is stretched to the limit in its capacity to respond. (AP / Jonathan Paye-Layleh)

FREETOWN, Sierra Leone -- Sierra Leone on Saturday defended its response to the Ebola outbreak ravaging West Africa, saying it was dismayed by allegations that affected governments are not doing enough.

The deadly disease, which causes bleeding, high fevers and organ failure, has been linked to more than 330 deaths in Guinea, Liberia and Sierra Leone, according to the World Health Organization. This outbreak has killed more people than any other on record, according to Doctors Without Borders.

The outbreak is "totally out of control" and the governments involved and international organizations are not doing enough to combat it, a senior official with Doctors Without Borders said Friday. More health experts are needed as is more education about how to stop the spread of the disease, said Bart Janssens, the medical group's director of operations in Brussels.

But Sierra Leone's Deputy Minister of Information and Communications Theo Nicol said that criticism is unfair, saying that his country has worked hard to educate people about how to stop the spread of the disease and has declared a state of emergency in the area where people have died.

The current outbreak, which began in Guinea either late last year or early this year, had appeared to slow before picking up pace again in recent weeks, spreading to the capital of neighbouring Liberia for the first time. Experts have said the disease is particularly difficult to contain because it has spread to multiple locations, including densely populated urban areas. Ebola usually strikes in eastern or central Africa.

Ebola spreads through direct contact with infected people and has no cure or vaccine. Containing an outbreak, therefore, focuses on supportive care for the ill and isolating them to limit the spread of the virus.

The highest previous death toll was in the first recorded Ebola outbreak in Congo in 1976, when 280 deaths were reported, according to the WHO. Because Ebola often touches remote areas and the first cases sometimes go unrecognized, it is likely that some deaths are uncounted during outbreaks.