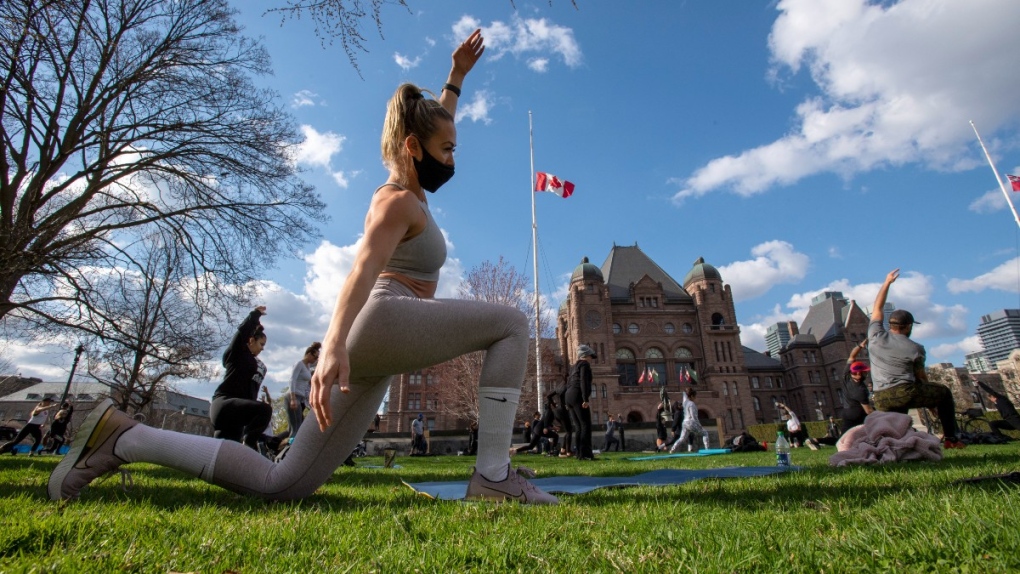 Members of the fitness community gather for a workout on the lawn of Queen's Park in Toronto on April 14, 2021. (Frank Gunn / THE CANADIAN PRESS)

It seems the majority of Canadian adults aren't making the grade when it comes to physical fitness.

The second report card for adults from ParticipAction, a non-profit group that promotes healthy living and typically ranks children's fitness levels, suggests many had poor activity levels during the COVID-19 pandemic.

It gives grown-ups an "F" for sedentary behaviour after finding 88 per cent of surveyed adults said they were relatively inactive more than eight waking hours per day. Examples of such behaviour include sitting while watching television, playing video games, listening to music, doing paperwork or commuting.

The report, released Tuesday, also gives adults a "C" when it comes to both total daily steps and moderate-to-vigorous physical activity.

The findings are largely based on Statistics Canada data collected through various surveys in 2020 and 2021.

Roughly 49 per cent of surveyed adults took at least 7,500 steps per day, which Statistics Canada describes as a "physically active lifestyle." That's down slightly from 52 per cent in the previous report card, which looked at pre-pandemic activity in 2018 and 2019 and was released in late 2019.

Meanwhile, 57 per cent reported at least 150 minutes of moderate-to-vigorous physical activity per week -- the same as in the last study.

Researchers are urging Canadians to do more, noting many people said they were less active amid pandemic-related restrictions that closed gyms, offices and sports leagues, even though some people found opportunities to be more active.

The report said being sedentary for extended periods of time can lead to poorer mental health and increased risk of cardiovascular diseases, poor cognitive functioning, Type 2 diabetes and pulmonary disease.

"You're going to benefit from it immediately ... mental health and cognitive benefits," she said.

Canadians now tend to have a little less physical activity baked into their everyday lives than in 2019, she said, because many people spend more time at home due to the COVID-19 pandemic.

People who would typically walk or bike for part of their commute may not be doing that, while recreational activities became less of a priority or were no longer available, the report noted.

Still, Vanderloo said the pandemic also led some people to be a little more active.

"We maybe lost some opportunities, but we definitely saw more people spending time outdoors," she said.

"I noticed a lot more families spending time after dinner walking around because we might not have had necessarily lots of things to do."

The report noted that not all sedentary behaviour is equal, pointing to some evidence of cognitive benefits from sitting while typing, reading, playing a musical instrument, or doing arts and crafts.

This report by The Canadian Press was first published Nov. 30, 2021.

Unvaccinated travellers barred from planes and trains as of Monday

These provinces have confirmed cases of the Omicron variant

Here's what vaccine manufacturers have said about the Omicron variant

Omicron was in Netherlands before South Africa discovery announcement