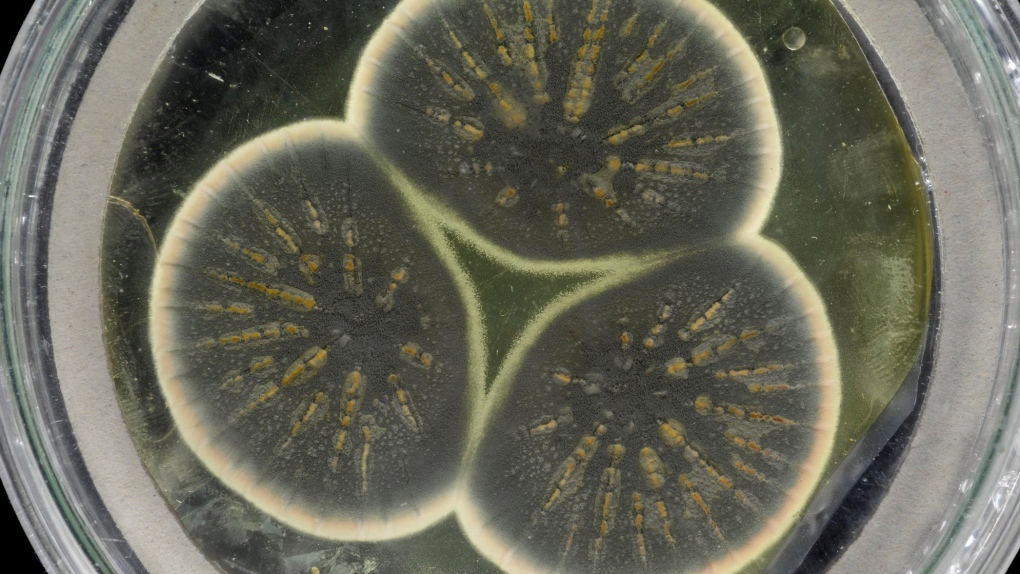 This mold was regrown from Alexander Fleming's frozen sample that produced the first antibiotic, penicillin. (CABI)

The accidental discovery of penicillin by Alexander Fleming in 1928, when mold contaminated one of his petri dishes, changed the course of modern medicine, with antibiotics key to the decline of many diseases over the course of the 20th century.

Now, scientists have woken up Fleming's original Penicillium mold and sequenced its genome for the first time. They say the information they have gleaned could help in the fight against antibiotic resistance.

"Remarkably after all this time spent in the freezer, it grows back fairly readily. It is fairly easy, you just break it out of that tube and put it on a petri dish plate and away it goes," said Tim Barraclough, a professor at the Department of Life Sciences at Imperial College London and the Department of Zoology at Oxford University.

"We realized, to our surprise, that no one had sequenced the genome of this original Penicillium, despite its historical significance to the field."

Fleming discovered penicillin in 1928 while working at St. Mary's Hospital Medical School, which is now part of Imperial College London.

The team regrew Fleming's original Penicillium from a frozen sample kept at the culture collection at CABI, which is home to 30,000 strains of microorganisms, and extracted the DNA for sequencing. The mold had been stored in a freezer there since 1945.

It's not the first time the mold has been regrown. In 2019, Penicillium fungus grown from the original strain went on an educational world tour to China and India.

The team used the genetic information to compare Fleming's mold with two strains of Penicillium from the United States that are used to produce the antibiotic on an industrial scale.

They looked at two kinds of genes: those encoding the enzymes that the fungus uses to produce penicillin; and those that regulate the enzymes, for example by controlling how many enzymes are made. The study was published Thursday in the journal Scientific Reports.

Barraclough said they were looking for differences that have evolved naturally over time that would shed light on how antibiotic production might be modified to help in the battle against superbugs.

"It might give us some suggestions for how we could try and improve our use or the design of antibiotics for combating bacteria," he said.

"A lot of effort has been looking for whole new classes of antibiotics. But then when each of those are put into use, then the same thing happens after a period of time -- five or 10 years then you've got resistance to those," he added.

His team was "looking at the subtler variations maybe within a class of antibiotics and how that might vary in nature and whether we can use those more subtle differences to shift the balance a bit in tackling these bacteria."

Fleming initially struggled to identify the exact strain of the fungus that created the bacteria-free circle in his petri dish, and over the years, several species of Penicillium have been identified as producing penicillin.

During the 1930s and 1940s, scientists in the U.K. and U.S. evaluated many different strains to see if any could be used to mass-produce penicillin, and the drug saved thousands of wounded soldiers and civilians during World War II.

In his lifetime, Fleming realized that his discovery could be endangered by antibiotic resistance and warned of the dangers at his Nobel lecture in 1945.

"The time may come when penicillin can be bought by anyone in the shops," he said. "Then there is the danger that the ignorant man may easily underdose himself and, by exposing his microbes to nonlethal quantities of the drug, make them resistant."

Drug resistance is expected to result in 10 million deaths a year by 2050 as bacteria outsmart our most sophisticated drugs.