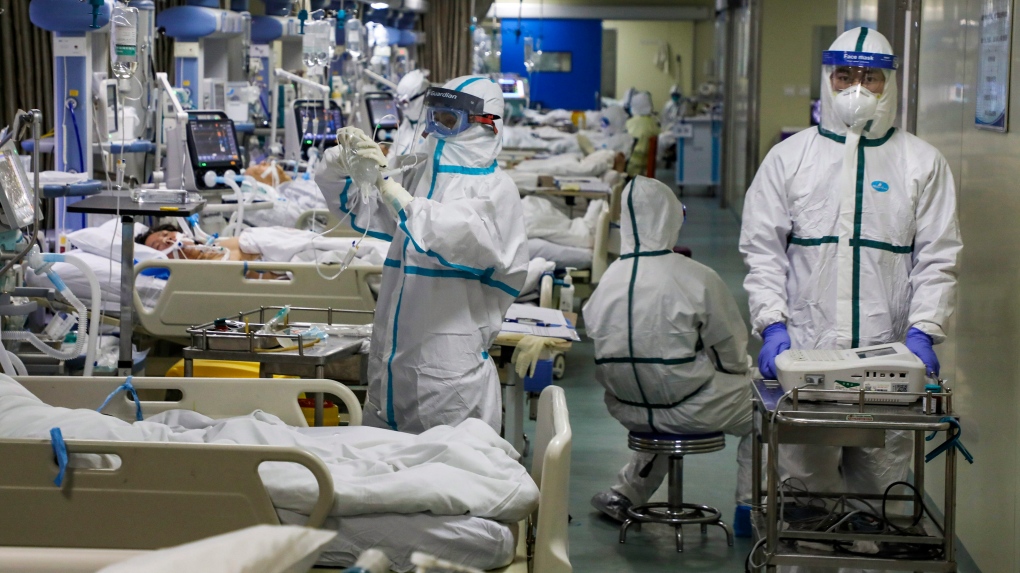 OTTAWA -- Canadian medical experts say the country's already overstretched emergency rooms would find it difficult to cope if a true outbreak of the novel coronavirus, or COVID-19, were to take hold in Canada.

So far, the virus has been relatively contained to mainland China, thanks in part to one of the largest quarantines in modern history.

"We must not look back and regret that we failed to take advantage of the window of opportunity that we have now," Dr. Tedros Adhanom Ghebreyesus, director general of the World Health Organization, said in a message to all the world's countries Friday.

The risk of contracting the virus in Canada right now is extremely low, and public health officials have been lauded for their efforts to detect and isolate the nine cases confirmed in the country so far.

The hundreds of patients across the country who have tested negative for the virus are also a sign that containment efforts are working as they should.

But Canada's most recent case in British Columbia has raised fears about where and how the disease is being transmitted abroad. Unlike others who've imported the virus from China or from people who have recently been to China, the woman in her 30s contracted the illness while in Iran.

"Any imported cases linked to Iran could be an indicator that there is more widespread transmission than we know about," said Canada's chief medical officer Dr. Theresa Tam Friday.

Canada has taken major steps to prevent the kind of shock that befell Ontario during the outbreak of the coronavirus known as SARS in 2003 that led to 44 deaths. Creating the Public Health Agency of Canada, which Tam heads, is one of them.

The country is now better co-ordinated, has increased its lab-testing capabilities and is prepared to trace people's contacts to find people who might have caught a contagious illness without knowing it.

But once the number of incoming cases reaches a critical mass, the approach must change, according to infectious-diseases physician Dr. Isaac Bogoch of Toronto's University Health Network.

He likens the response to trying to catch fly balls in the outfield: as the number of balls in the air increases, they become harder and harder to snag.

"Every health care system has limits," Bogoch says. "The question is, if we start getting inundated with cases, how stretched can we get?"

Many emergency-room doctors argue Canada's ERs are already as stretched as they can get and are worried about what would happen if they suddenly had to start treating COVID-19 cases en masse.

From the public-health perspective, the greatest challenge may be as simple communicating across all parts of the health system across the country, said Dr. Jasmine Pawa, president of the Public Health Physicians of Canada.

"We cover a very wide geographic area," she said, though she added that Canada has made great strides over the course of the SARS experience and the H1N1 flu outbreak in 2009.

Dr. Alan Drummond of the Canadian Association of Emergency Physicians, who works at the hospital in Perth, Ont., says he doesn't want to fearmonger, especially considering all the lessons Canada has learned from past outbreaks, but the reality of life in the ER gives him pause.

"Our day-to-day experience in crowded hospitals, unable to get the right patient in the right bed on a day-to-day basis ΓÇª makes us really question what the integrity of our health-care system would be like in a major severe pandemic," Drummond says.

He envisions that a disease like COVID-19, if it spread widely, would have a major impact, including the possibility of cancelled surgeries and moving stable patients out of hospitals who would otherwise stay.

"I think there would have to be hard decisions made about who lives and who dies, given our limited availability by both speciality and (intensive-care) beds and we would probably see some degree of health-care rationing," he says.

The problem may be even more pronounced because of Canada's aging population, he said. The virus tends to hit older people harder, according to observations made in China and abroad, and is also particularly dangerous for people with other health problems.

Older people also tend to stay admitted in hospital beds even when they are in relatively stable condition because of a lack of long-term-care beds across the country.

That keeps emergency rooms from being able to move acute patients out of the ER and into those beds, limiting hospitals' capacity to handle new cases.

Tam agreed Friday that hospital capacity is a "critical aspect" of Canada's preparedness for a potential coronavirus outbreak, but said even very bad flu seasons can have a similar effect on emergency rooms.

"If we can delay the impact of the coronavirus until a certain period, when there's less influenza for example, that would also be very helpful," she said.

She also suggested people who are concerned about the possibility that they're developing COVID-19 symptoms should call ahead to a hospital so they can make proper arrangements for containment and isolation.

Canada is doing its best, along with every other country in the world, to seize this time of relative containment and plan ahead, Tam said.