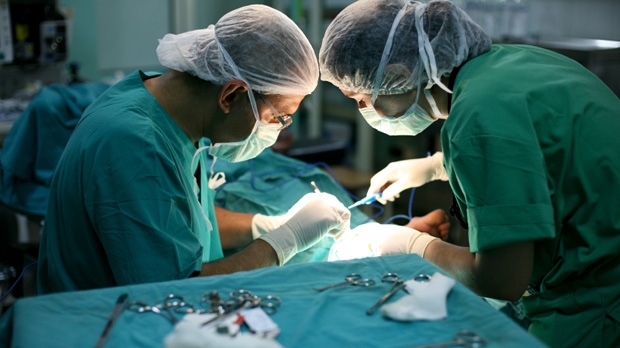 Canadians living in rural or remote communities are at risk of poorer health outcomes due to a shortage of anesthesia services, say researchers calling for a national strategy to address inequitable access to care.

Dr. Beverley Orser, chair of the department of anesthesiology and pain medicine at the University of Toronto's faculty of medicine, said pregnant women in some areas must travel hundreds of kilometres for maternity services.

Patients who suffer serious injuries are at greater risk of dying in rural areas that lack adequate trauma care, she said.

Orser and Dr. Ruth Wilson, professor emeritus at the department of family medicine at Queen's University, have authored a commentary in this week's edition of the Canadian Medical Association Journal, outlining strategies aimed at addressing inequities in care for rural patients compared with those who live in cities.

An ongoing shortage of anesthesiologists seems be worsening across the country as evidenced by job ads going unanswered, an aging workforce and discussions among those chairing anesthesia departments at Canada's 17 medical schools, said Orser, who is also an anesthesiologist at Toronto's Sunnybrook Health Sciences Centre, which has the largest trauma facility in Canada.

She said it will take the collective effort of governments, who will need to fund more anesthesiology training spots at universities, as well as academics and policy-makers to deal with disparities that disproportionately affect Indigenous populations.

She cited the example of pregnant women in Bella Coola, B.C., where maternity services were eliminated in 2008, forcing patients to drive six hours to Williams Lake. Those with high-risk pregnancies may have to live there at their own expense for part of their pregnancy.

"Probably one of the most important calls to action is to undertake much better workforce planning," Orser said. "We need to understand what's happening and what's needed in the future and how to address it."

Anesthesiologists manage pain before and after surgery, as well as prior to, during and following childbirth, and provide potentially life-saving resuscitation for patients on ventilators.

Family practice anesthesiologists often work in smaller communities and are general practitioners with extra training to provide anesthesia for low-risk procedures. They're also a cheaper option.

"It's likely there's not one solution that fits all jurisdictions but right now we don't have it right."

Canada could learn from Australia, where a national curriculum for family practice anesthesiologists has been developed, along with ongoing mentorship of doctors in rural areas, she said.

"They, for example, are building a program where people who work in these communities can come back to the bigger centres for two weeks in a funded position, which is really an important model because it's tough working in these environments."

In Canada, support from anesthesiologists to their rural colleagues is limited, Orser said. For example, while specialists from Alberta and Saskatchewan fly to their colleagues in Yellowknife, a national program with a well integrated network is needed, she added.

However, the heavy workload of a family practice anesthesiologist often means some don't stay long in rural areas, Orser said.

Dr. Roland Orfaly, head of the British Columbia Anesthesiologists' Society, said the province has a high need for the specialists in both large and small communities.

"In the rest of the country it truly is a rural problem. In B.C., it's a provincewide problem," he said.

However, Orfaly said British Columbia employs about a quarter of Canada's 500 family practice anesthesiologists, the most of any jurisdiction in the country, likely because the province is so geographically isolated.

Orfaly supports Orser's call for a national strategy to address the shortage of anesthesia services.

"The provincial approach, at least to the anesthesiologists' workforce, has not been effective so we would welcome a national approach to health human resources to see if that is any more effective in helping us."