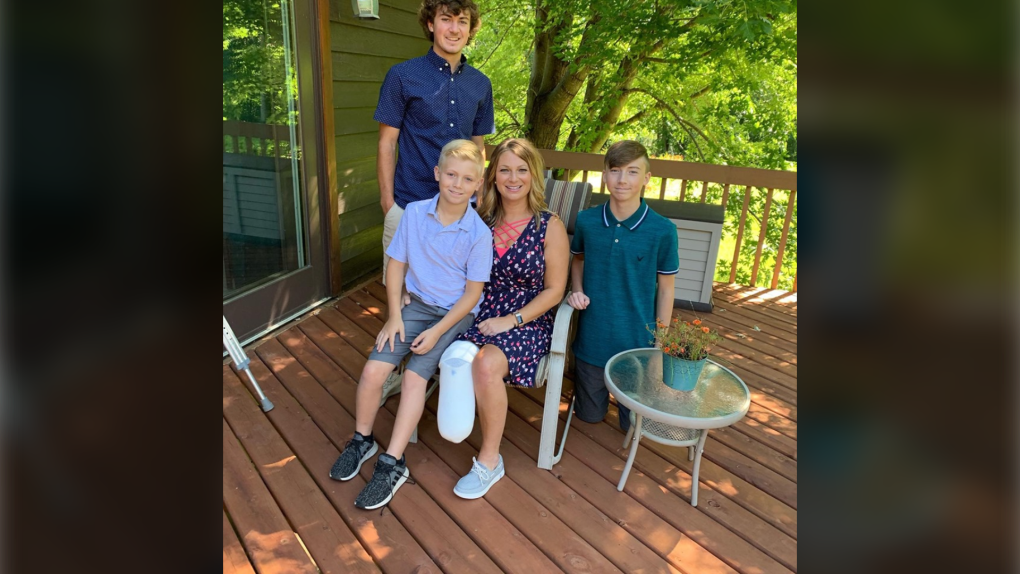 Alecia Kennen had her right leg amputated in June 2019 due to streptococcal toxic shock syndrome. (Help Alecia and her children / Facebook)

WARNING: Some readers may find the content in this story disturbing

A Wisconsin mother is warning others about the dangers of a rare form of strep infection she contracted from a rug burn wound, which eventually led her to have her fingertips, toes, and half of one leg amputated.

On June 6, 2015, Alecia Kennen said she tripped over her dog in her home in Rice Lake, Wis. and received a rug burn on her shoulder.

“I just kind of tripped and dove into the carpet and my shoulder took the brutal part of it,” she said during a telephone interview with CTVNews.ca on Wednesday.

Kennen said she didn’t think anything of it, until two days later, when she woke up with a sharp pain under her armpit. The pain intensified throughout the day and she left work early to visit the urgent care centre at her local hospital.

Despite the pain in her armpit, Kennen said doctors were unable to find anything physically wrong with her and sent her home. For the next two days, the pain worsened and the mother of three boys said she returned to the emergency room on several occasions.

“I was just in so much pain and I didn’t know what to do,” she said. “I was nauseated. I had a fever. I ached all over and that pain was just so intense.”

By that time, Kennen said her heart rate was high and her blood pressure was really low and the doctors knew something was seriously wrong. She was airlifted to another hospital in Eau Claire, Wis. and underwent an exploratory surgery. Despite the procedure, doctors still weren’t sure what was causing Kennen’s illness.

That is, until one of her sons complained of a sore throat while he was visiting Kennen in hospital. It turned out all three of her sons had contracted strep throat.

“That kind of gave them [doctors] the clue that they had been looking for,” she said.

Soon after, Kennen was diagnosed with streptococcal toxic shock syndrome (TSS), a severe complication from an invasive infection of group A strep bacteria. She was told the bacteria most likely entered her bloodstream through the rug burn wound on her shoulder.

At the time of her diagnosis, Kennen had begun bleeding internally, her lungs were filling with fluid, her major organs were failing, and her fingers and toes had started to turn blue from a lack of blood supply. She was airlifted to another hospital in Madison, Wis. where she was treated for nearly three months.

During that time, Kennen had to have all of her fingertips amputated to below the first and second knuckles to prevent the tissue-killing infection from spreading.

In August 2015, she was finally able to return home to her three sons.

While Kennen appeared to be recovering from her ordeal, the infection in her feet returned.

“My right heel was the worst of it because it was to the bone. You could clearly the see the bone with the infection going on in the heel,” she recalled.

By January 2016, Kennen underwent another surgery to have all of her toes and part of her feet amputated.

For the next three years, the single mother had to relearn how to walk, diligently clean her wounds to prevent further infections, and care for three sons. However, her right foot failed to heal.

In December 2018, the infection in that foot returned and a biopsy showed it had travelled to the bone itself for the first time.

“Over those four years, I also developed avascular necrosis in the heel, which pretty much meant there was a lack or little blood supply to the bone. Basically, my heel bone and up through my ankle, the bone was dead,” she explained.

In June, Kennen had to have another amputation to remove her right leg below the knee.

“It’s been hard,” she said. “Obviously, my goal, always, was to still be able to take care of my boys.”

It’s been three months since the procedure and Kennen said she has been healing “really well.” She said doctors are hopeful the infection won’t return, despite signs of avascular necrosis in her left foot.

“I’m hoping that that doesn’t become an issue in the future, but I guess it’s just kind of day-by-day and take it as it comes,” she said.

Kennen said the most difficult part has been trying to maintain a “normal life” at home with her family.

“Just the everyday routine that has been really hard, especially since the below-the-knee amputation,” she said. “Everything I do takes twice as long and I’m needing to find new ways to be able to do things.”

Kennen said she is in the process of being fitted for a new prosthetic limb so that she can one day return to her former active lifestyle.

To help Kennen pay for all of her medical bills and support her family, a friend has created a GoFundMe page and a Facebook fundraiser on her behalf.

As for why she’s speaking out about her experience now, Kennen said she wants others to be aware of this rare illness in case it happens to them too.

“My main goal is to let people know that it can happen and to know the signs and symptoms because I didn’t,” she said. “If you could get treated on antibiotics right away, it definitely could help.”