Pot, alcohol most common cause of youth substance-use hospitalizations: report 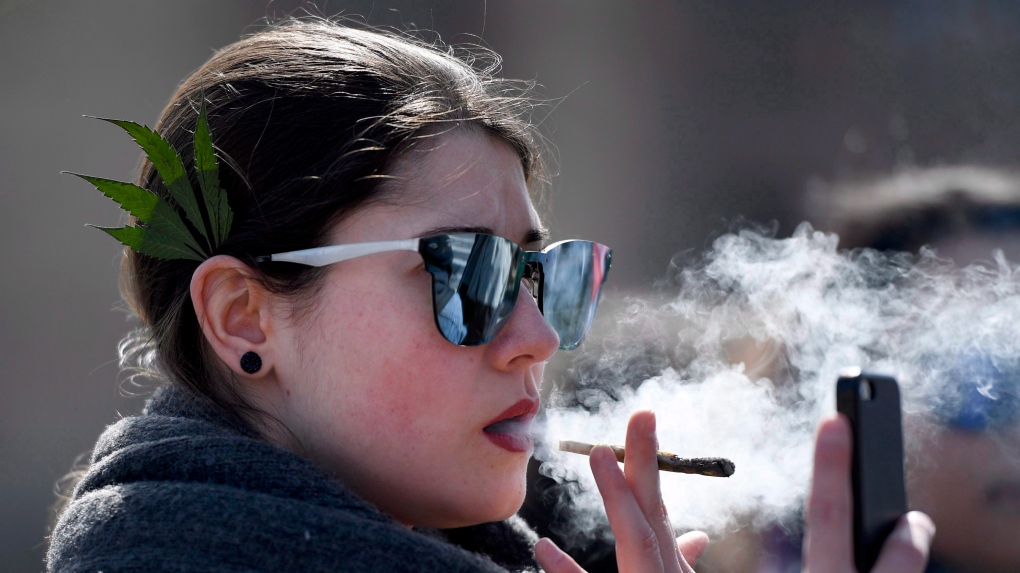 A woman smokes a joint during the annual 4/20 marijuana celebration on Parliament Hill in Ottawa on Friday, April 20, 2018. (THE CANADIAN PRESS/Justin Tang)

VANCOUVER -- Marijuana and alcohol were the most common substances leading to hospitalization of youth aged 10 to 24 across the country, says a report that highlights the prevalence of mental-health conditions as contributing factors.

About 23,500 people in that age group were hospitalized for harm caused by substance use, amounting to an average of 65 hospitalizations every day between April 2017 and March 2018, says the Canadian Institute for Health Information in a report released Thursday.

Overall, cannabis was documented in almost 40 per cent of hospitalizations and alcohol was associated with 26 per cent of hospital stays, says the report that calls for improved access to initiatives that reduce risks and harms from substance use, more mental-health and support services as well as early treatment strategies.

For youth who stayed in hospital for cannabis use, 81 per cent received care for a mental-health issue such as anxiety, says the report. Meanwhile, 49 per cent of opioid-related stays also involved care for mental-health treatment.

Jean Harvey, director of the institute's population and health initiative, said the data show only the "the tip of the iceberg" because they don't include care in emergency rooms, family doctors' offices, addiction centres or deaths from overdose.

The report is also based on data collected before cannabis was legalized last October, suggesting the information is a baseline for further research involving youth drug use, Harvey said.

"We need to be protecting kids, we need to be educating kids that just because it is legal doesn't mean it's safe," she said. "I think it can be a bit of a wake-up call for parents and those who are working with youth."

This is the first year CIHI has published the report.

Of the provinces, Saskatchewan had the highest rate of hospitalizations at 667 per 100,000 population, mostly due to cannabis, followed by alcohol and stimulants which could include methamphetamine and Ritalin, prescribed for ADHD.

Prince Edward Island was second, with a rate of 547 youth per 100,000 population admitted to hospital. Among these P.E.I. cases, cannabis was the most common cause, followed by what the report categorizes as "unknown," or a mixture of unidentified substances.

British Columbia's rate was 467 hospitalizations, with cannabis as the leading cause, followed by alcohol and stimulants.

The highest overall youth substance-use hospitalization rates in Canada were in the Northwest Territories, at 1,755 admissions, followed by 1,095 in Nunavut, says the report.

It says 69 per cent of hospital stays for harm caused by substances involved care for a concurrent mental-health condition such as anxiety.

However, the overall proportion of substance-use hospital stays among youth aged 10 to 24 was nearly double that of adults aged 25 and older, the report says.

Tracy Masters of Campbell River, B.C., said her daughter began using cannabis, alcohol and ecstasy at age 14 and ended up in the emergency department before going to seven treatment centres and a year of rehabilitation that had her at her healthiest in years.

However, Elann Masters relapsed six weeks later and died in March at age 30 after returning to alcohol and methadone, her mother said.

Masters said she took her daughter to the emergency department several times, starting at age 16, but she was always released when she should have been hospitalized before her addiction spiralled out of control.

"It led to many nights in cells, through the RCMP system, many nights in emergency for overdose, psych wards. But never lengthy stays and that's been something I've been advocating for. There's all of these gaps in between these systems. Just because someone comes out of their high and they're sober, they're released out of emergency or the psych ward. They need help."

Dr. Quynh Doan, a pediatric emergency-room physician at BC Children's Hospital in Vancouver, said youth with substance use issues are typically admitted to hospital for detox or treatment on a substitute drug or admitted to a psychiatric ward for mental-health issues.

"In kids, we are just starting that kind of therapy," she said of substitution treatment. "We don't have a large number of detox programs like we have for adults. We have to hospitalize them to initiate care."

However, while most families are receptive to care in hospital, youth sometimes refuse to consent to treatment, Doan said. Laws in various provinces allow adolescents to make their own decisions, she adds,@ creating a "grey area" that requires care teams to consider factors such as youths' mental capacity, effects of any mental-health issues and whether they are still intoxicated.

"It's a matter of how do we hospitalize involuntarily to try and prevent the next overdose?"

Doan, who read the institute's report, said the prevalence of substance use among youth calls for regular screening for substance use by health-care providers including pediatricians, family doctors and emergency-room staff, even if youth don't present with those issues.

"We need to look at mental health the same way we look at all health issues," she said. "We need to screen and talk about it as openly and early as possible to help kids and families address issues when they're more effectively addressable."

Jodi Miranda, whose daughter started using cannabis, alcohol and MDMA at age 14, said she and her husband felt increasingly isolated as her behaviour worsened and she became suicidal before being diagnosed with anxiety.

Miranda said the couple joined a group called Parents Together, which is offered at four main locations in B.C. by the Boys and Girls Club of Canada, so they could get the support of others who would understand the stigma and judgment that parents of substance-using kids often experience.

"We really quickly realized there are so many people going through exactly what we are going through but nobody ever admits it," she said. "Then suddenly we were sitting in a room full of equals, where everybody knew we were all trying our best and these kids are taking their own path in life whether we like it or not."

This report by The Canadian Press was first published Sept. 19, 2019.