Polio is back in Indonesia, sparking vaccination campaign

Polio is back in Indonesia, sparking vaccination campaign 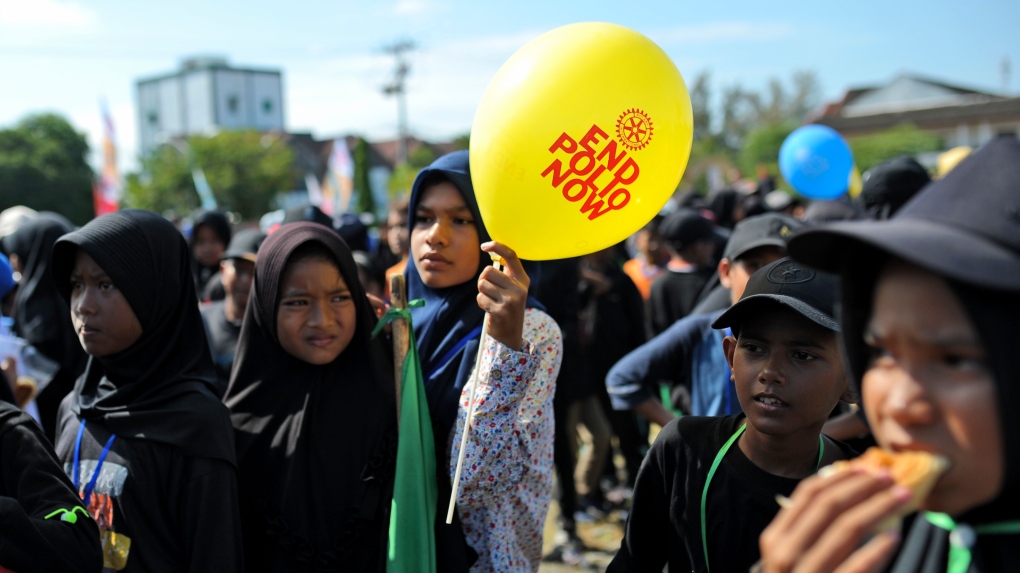 Children queue up for their turn to be vaccinated against poliovirus during a polio immunization campaign at Sigli Town Square in Pidie, Aceh province, Indonesia, Monday, Nov. 28, 2022. Indonesia has begun a campaign against the poliovirus in the the country's conservative province after several children were found infected with the highly-contagious disease that was declared eradicated in the country less than a decade ago. (AP Photo/Riska Munawarah)
PIDIE, Indonesia -

Children in school uniforms and toddlers with their parents lined up Monday for polio vaccinations in the Sigli town square on the northern tip of the Indonesian island of Sumatra, after four children were found infected with the highly contagious disease that was declared eliminated in the country less than a decade ago.

The virus was first detected in October in a 7-year-old boy suffering from partial paralysis in the province of Aceh near Sigli, and since then three other cases have been detected, prompting the mass immunization and information drive.

Official say that polio immunization rates in the conservative province are well behind the rest of the country, with efforts hampered by widespread disinformation the vaccine is incompatible with religious beliefs, among other things. The government has also been prioritizing COVID-19 vaccinations since they became available.

The campaign that started Monday aims to vaccinate some 1.2 million children in the province, said Maxi Rein Rondonuwu, the Health Ministry's director general for disease control and prevention.

"There is no cure for polio, the only treatment is prevention and the tool for prevention is vaccination," Rondonuwu said, adding that the child is still able to walk, albeit with a limp.

With some 275 million people, Indonesia is the world's fourth most populous, and the largest Muslim-majority nation.

Aceh is particularly Conservative, and is Indonesia's only province allowed to practice Shariah, which was a concession made by the national government in 2006 to end a war with separatists.

False rumours that the polio vaccine contains pork or alcohol, prohibited according to Muslim beliefs, have proliferated, especially in rural areas, complicating vaccination efforts, said the head of the Aceh Health Office, Hanif, who only goes by one name like many Indonesians.

"We cannot work alone, we need support from all parties, including religious leaders, to that people understand the importance of immunization," said Hanif.

Azhar, the father of the 7-year-old who contracted polio, said he had opted not to immunize his son after other villagers where he lived told him the vaccines may cause harmful chemicals or non-halal substances.

"My neighbours said that my son don't need to be immunized and I didn't want my son get sick because of harmful chemicals that are against Islam," the 45-year-old said.

For Dewi Safitri, a mother of three who was getting them vaccinated on Monday, it was simply a matter of not knowing it was necessary.

She said she was convinced after health workers spelled out the risks of paralysis or death if her children were to go unvaccinated.

"I didn't even know about immunization," she said.

The World Health Assembly adopted a resolution for the global eradication of polio in 1988 and since then, wild poliovirus cases have decreased by more than 99%, according to the World Health Organization.

It was eliminated in Indonesia in 2014, and is today only still endemic in two countries – Afghanistan and Pakistan.

Polio primarily affects children under the age of 5, according to the WHO. Unvaccinated people of any ages can contract the disease, however, and sporadic cases continue to crop up.

In September in New York, for example, the state stepped up its polio-fighting efforts after the disease was detected in the wastewater in the New York City area.

Officials began checking for signs of the virus there after the first case of polio in the United States was identified in July in Rockland County, which is north of the city. It was confirmed in a young adult who was unvaccinated.

The statewide polio vaccination rate is 79% but Rockland's rate was lower, and New York health officials urged all unvaccinated residents, including children by 2 months of age, to get vaccinated immediately.

Last week, new poliovirus cases were found in Afghanistan, Algeria, Chad, Democratic Republic of Congo, Ethiopia and Nigeria, according to the WHO's Global Polio Eradication Initiative.

Of the three other children in Indonesia from the same village as the initially confirmed case none had their basic vaccinations, Rondonuwu said.

"It has to be reported as an outbreak, because it had been declared eradicated in Indonesia, but it turns out that there is still wild polio virus," he said.

Rondonuwu said his ministry is keeping a close watch on the cases by doing door-to-door screening to ensure that there are no additional infections that have not been reported.

The polio virus is transmitted person-to-person, generally through the "fecal-oral" route, according to the WHO. In Indonesia, authorities have also pointed to unsanitary conditions as a probable cause of the new infections after finding out that some local residents still defecate directly into a river where children are often found playing.

Across Indonesia, polio vaccination coverage has been slipping since the outbreak of COVID-19. Despite the challenges of reaching people in the archipelago nation of five main islands and thousands of smaller ones, 73.4% of Indonesians are now fully vaccinated for COVID-19 and 87.5% have at least one shot.

For polio, 86.8% of babies were vaccinated in their first year in 2020 countrywide, which fell to 80.7% in 2021 as the country was forced to focus most of its health facilities and workers on addressing the pandemic.

By comparison, only 50.9% of the infants born in Aceh in 2021 received a polio vaccination. It was the second lowest on a national scale after West Papua, where only 43.4% of babies were vaccinated.

The countrywide decline was part of a broader drop in basic immunizations, such as for measles and rubella, according to UNICEF.

Dicky Budiman, an Indonesian epidemiologist from Australia's Griffith University, said the discovery of polio in Aceh must be responded to seriously because "the threat is real for Indonesia," noting that basic immunization coverage is still low, putting the country in a high-risk category.

"This is what the government really has to pursue, because it's dangerous if we don't," Budiman said.

"We must move immediately by strengthening basic immunization or there will be a potential additional health disaster for Indonesia."

A suicide bomber struck Monday inside a mosque within a police compound in the northwestern Pakistani city of Peshawar, killing at least 28 people and wounding as many as 150 worshippers, most of them policemen, officials said.

Anti-poverty activists are praising the Quebec basic income program as a good step toward helping people meet their basic needs — but say strict eligibility criteria exclude many of the province’s lowest-income residents.