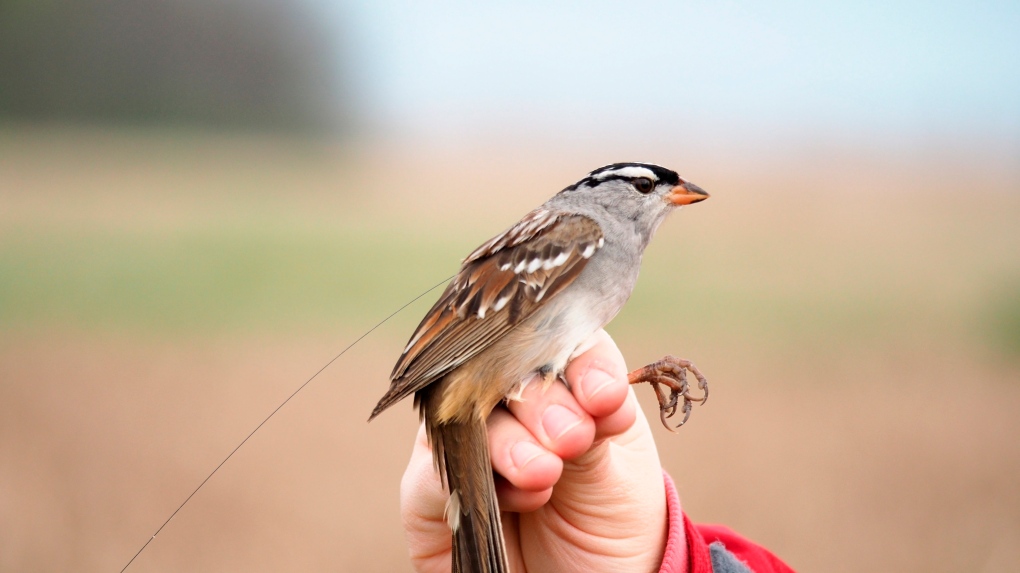 In this May 12, 2017, photo by Margaret Eng, a white-crowned sparrow in southern Ontario stands affixed with a lightweight digitally coded radio transmitter. (Margaret Eng/ Saskatchewan Toxicology Centre via AP)

PORTLAND, Maine -- Scientists studying a widely used pesticide say even small doses of the chemical can have crippling health effects on migrating birds, and it might be contributing to declines in their overall populations.

The researchers with the University of Saskatchewan are set to publish their research about the insect-killer imidacloprid in the journal Science on Friday. The insecticide is among a class called neonicotinoids that has been widely studied for its health impacts on bees.

The scientists studied white-crowned sparrows that consumed small doses of the pesticide and found that the birds experienced weight loss and delays in migration. Those changes can hinder the birds' ability to reproduce and survive, and that might be contributing to songbird population declines, said Christy Morrissey, a biology professor at the university and the senior author of the paper.

The paper breaks new ground in the study of pesticide effects on birds because it shows a biological link between the chemicals and their population loss, Morrissey said. More than 70 per cent of North American farmland birds are showing population declines, she said.

"It causatively links a pesticide to something that is really, tangibly negative to birds that is causing their population declines," Morrissey said. "It's clear evidence these chemicals can affect populations."

Farmers use imidacloprid and other neonicotinoids -- a class of insecticides chemically related to nicotine --to control pests that can damage crops. Studies have linked neonicotinoids, and imidacloprid specifically, to decreases in survival of honey bees.

The Saskatchewan study shows that the pesticide could be having a major effect in migratory song birds, said Frank Drummond, a University of Maine professor of insect ecology who has studied the impact of neonicotinoids. Drummond, who was not involved in the study, said a major question remains about whether birds are getting exposed to the pesticide during their migration.

The researchers conducted their study by capturing and exposing dozens of sparrows to small doses of the pesticide during a stop on their migration in Canada. They measured the birds' body composition and affixed a radio transmitter when setting them free.

They found birds that received higher doses of the pesticide ate less food and lost body mass, which meant they stayed at the migration stopover site longer. Migration is a dangerous time for birds, and the delay could result in exposure to predators and less reproductive success, said Nicole Michel, a senior quantitative ecologist with Audubon.

Michel, who was also not involved in the study, said she wouldn't encourage a ban on neonicotinoids, because that would likely result in more use of other pesticides that could be as harmful or worse. A better outcome would be for farmers to use them more conservatively, she said.

"Instead of spraying and treating all these seeds ahead of time, it would be cost efficient to only treat after outbreaks are observed," she said.

The key manufacturer of imidacloprid is agrochemical giant Bayer CropScience. David Fischer, chief scientist for pollinator safety for the company, said the study is solid on a toxicological basis. However, he said it's not representative of the amount of exposure to the pesticide that birds will experience in the wild.

"There's no support for thinking neonicotinoids are responsible for songbird decline, which they sort of hint at in the study," he said.