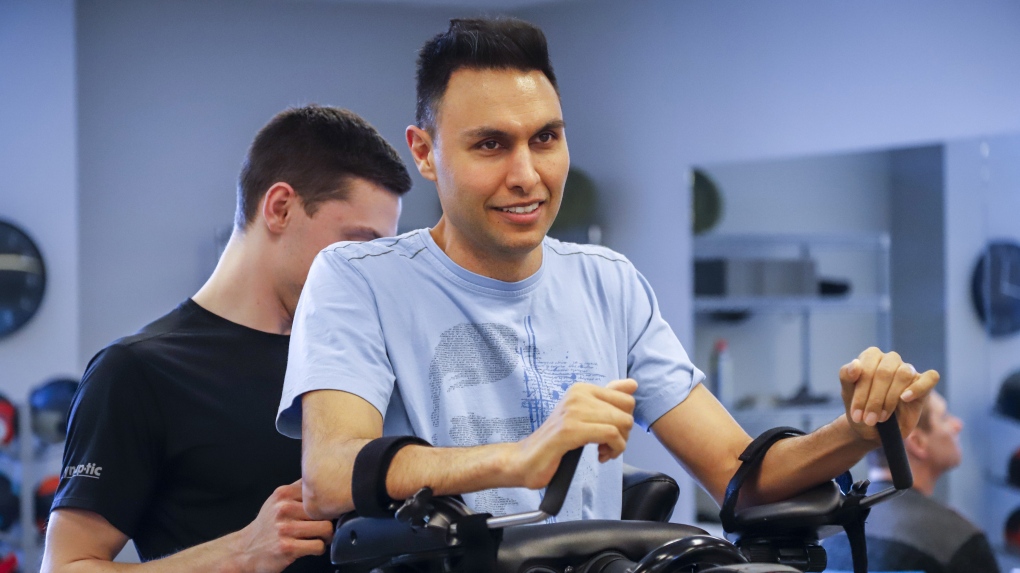 CALGARY -- A paralyzed Alberta man is back from Thailand after having a second experimental surgery that has given him some hope he'll be able to move more of his body.

Richi Gill of Calgary worked as a surgeon before he had a freak accident on a boogie board during a family vacation in Hawaii that broke his neck. He doesn't have any movement or sensation below that point but does have some use of his arms.

Gill travelled to Thailand last year to have an epidural stimulation implant placed in his lower back. The device, programmed to stimulate certain nerves mapped out by surgeons and therapists, has allowed him to take assisted steps with the help of physiotherapists and helped regulate his blood pressure.

He recently had a second unit installed below his injury to help restore more movement to his arms and hands.

"It's more unknown with this one for sure," Gill, 38, said following a physiotherapy session in Calgary.

"Right now, it's still early on and I can't really say if it's doing that or not. We just have to work through it and figure that part out."

There hasn't been a lot of research on the impact of having a second implant, he said. He'll have an answer within about a year.

"I'm hoping if it does show some improvement, then that's something that other people with similar types of injuries can see," he said.

"If it doesn't show any improvement, then at least we know this is where things are at and we need to look in a different direction."

"I guess now I've been on both sides of the field which I wasn't expecting to be."

Gill is one of just a few patients worldwide to have the second implant, said Uyen Nguyen, executive director of Calgary's Synaptic Spinal Cord Injury and Neuro Rehabilitation Centre.

It's hard to say what the outcome will be, she said, but it's worth a try.

"Richi's a surgeon, right? So this is everything to him and we're doing our best to give him more function," Nguyen said.

"He understands that this is not a cure by any means, but it is another device that is going to help improve his quality of life."