P.K. Subban admits disappointment at not being on Team Canada at World Cup 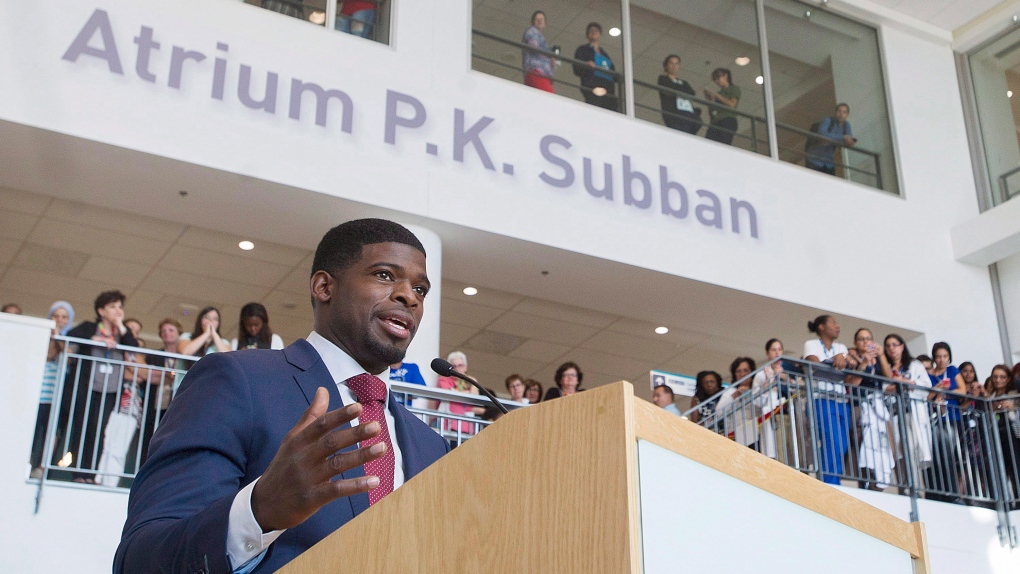 Montreal Canadiens defenceman P.K. Subban smiles during a press conference at the Children's Hospital in Montreal, Wednesday, September 16, 2015, where he announced that his foundation would pledge $10-million to the hospital over the next seven years. (Graham Hughes/The Canadian Press)

MONTREAL -- Nashville Predators defenceman P.K. Subban admits he's disappointed at not making the Canadian team for the World Cup of Hockey, but says he had no control over the decision to omit him.

The former Montreal Canadiens star told a news conference Wednesday he loves representing his country and that he's had "tremendous success" when given that opportunity.

Subban was left off the roster in May and again recently when Jay Bouwmeester was chosen to replace the injured Duncan Keith.

The World Cup opens in Subban's hometown of Toronto on Sept. 17, but he said his entire focus is on getting ready for his first season in Nashville.

Subban was in Montreal nearly one year after making a $10-million pledge to the Montreal Children's Hospital Foundation.

He said the P.K. Subban Foundation has contributed $1.4 million so far to P.K.'s Helping Hand, a fund that has helped more than 9,000 families at the hospital facing financial hardship because of their child's illness.

Following the blockbuster trade with the Predators on June 29 that sent fellow defenceman Shea Weber to Montreal, Subban assured young patients he wouldn't let them down and vowed to fulfil his commitment to raise a minimum of $10 million over seven years.

"One year ago, I told you that every time you see that sign up on the wall behind me, you would know what I stand for," Subban said, speaking in a three-storey atrium that carries his name in the heart of the hospital.

"My jersey might change, but what I support will always stay the same."

The flashy Subban began his speech by paying tribute to the late Jean Beliveau, who would have turned 85 on Wednesday.

He told a story about meeting the Habs great as a 10-year-old in Mississauga.

"Without people like Jean Beliveau, I probably wouldn't have the outlook, not only as a hockey player and an athlete, but as a person today," Subban said.

Subban was drafted by the Canadiens in 2007 and spent six full seasons with the club, winning the James Norris Trophy as the NHL's best defenceman in 2013.

He insists his focus this season won't be on proving to the Canadiens they were wrong to trade him because that would just "waste a lot of energy."

Subban took questions from several children and quipped he wouldn't hesitate in bringing the Stanley Cup to the hospital should he win it.

"There's no doubt it's coming back here, for sure," he laughed.