Overdoses down in B.C., but toxic, powerful drug is more common: coroner 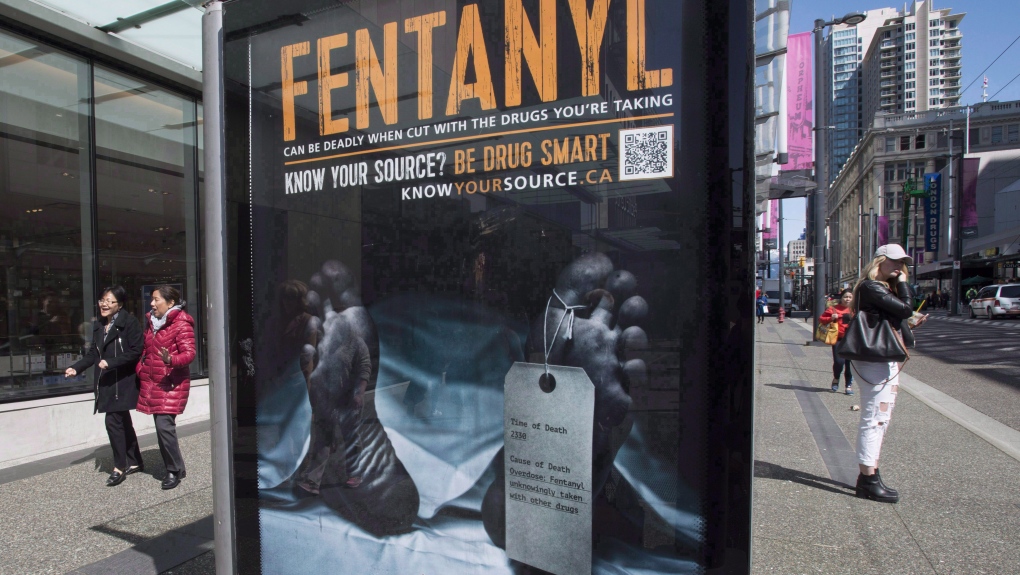 An anti-fentanyl advertisment is seen on a sidewalk in downtown Vancouver, Tuesday, April, 11, 2017. (THE CANADIAN PRESS/Jonathan Hayward)

VANCOUVER -- A drug expert says a powerful opioid that was never intended for human consumption is becoming more common in British Columbia's illicit drug supply and its "tremendous profitability" means the situation may get worse without intervention.

Dr. Evan Wood of the BC Centre on Substance Use said carfentanil is an elephant tranquilizer that is 100 times more potent than its cousin fentanyl, the primary culprit in the province's overdose crisis.

But the cost of producing and moving carfentanil is so low relative to its sale value that fighting its spread will require a broader look at the drug trade, he said in an interview.

"The tremendous profitability is what makes this a game changer," Wood said. "We're going to be playing Whack-A-Mole until we come to the acknowledgment that because of prohibition and the intense profitability of this, it's going to drive increasing toxicity in the drug supply."

Wood made the comment after the BC Coroners Service released new figures on suspected illicit drug deaths Wednesday, the same day that the B.C. government announced a public inquiry into money laundering, which Premier John Horgan said was linked to the overdose crisis.

The coroners' figures said fewer people are dying overall from overdoses and Wood said it brings some encouragement to front-line workers who have been in the trenches fighting the crisis.

The monthly average for suspected illicit drug deaths between January and the end of March was 89, down almost one-third from the same period last year when the average was 132 people a month, the BC Coroner Service said.

But carfentanil was detected in nearly double the number of deaths in the first quarter of this year than it was for the entirety of last year. By the end of March, the synthetic opioid was found to have been involved in 64 deaths compared with 35 for all of 2018.

Fentanyl and its analogues, including carfentanil, were detected in almost 85 per cent of suspected illicit drug deaths in the first quarter of 2019, a rate slightly lower than last year.

Carfentanil began appearing in the Canadian drug supply around 2016, the same year the Canada Border Services Agency staff seized a package containing one kilogram of carfentanil that came from China, enough for millions of doses. It has also appeared in Toronto, Winnipeg and other jurisdictions.

Chief Const. Mike Serr of the Abbotsford Police Department, who also chairs the drug advisory committee for the Canadian Association of Chiefs of Police, said quantifying the profitability of opioids is difficult since they are typically cut with other drugs rather than sold "pure."

For comparison, he said one kilogram of pure heroin typically costs $70,000 and would be added to a cutting agent to produce two kilograms worth of drugs for street sales.

Seer said one kilogram of fentanyl costs roughly $12,500 but can be mixed with 100 kilograms of a cutting agent for street sale because it's so potent. Estimating that profit is difficult because it may be sold under several different drug names with different concentrations, and in much smaller quantities than one kilogram at a time, but $1 million isn't out of the ball park, he said.

When you consider carfentanil is significantly more concentrated than fentanyl, the profit margins are exponential.

"If someone said 10 years ago, can you make the perfect drug, carfentanil and fentanyl would be unfortunately the drug because it's cheap, it's much easier to import, it's easier to source," he said.

The primary source of both fentanyl and carfentanil is China, although some other Asian countries are also involved. Transactions typically occur on the dark web and the drug is delivered in small quantities through the mail, Serr said.

Given that a dose the size of a grain of sand can be fatal, Serr said that even a very skilled anaesthesiologist couldn't produce a safe mix of the drug.

"The fact that this is being put out on the street -- the risk is just enormous. It is such a potent and dangerous drug that there's no way someone can safely say they could mix it into street drugs and someone could have any sense of safety when they take it," Serr said.

Wood emphasized the importance of for drug users to have their supply tested at an overdose prevention site or pharmacies that offer the service free and anonymously.

Vancouver Coastal Health and the BC Centre on Substance Use are also collaborating on a new research project providing drug users with take-home testing kits to determine if the kits can be used safely.

The overall decline in overdose deaths suggests that testing and other interventions, including safe consumption sites and education initiatives -- are working, Wood said.

There were no deaths at supervised consumption sites or drug overdose prevention sites, the coroners' data shows.

But Wood said there aren't many other jurisdictions to follow in preventing the spread of carfentanil. He has reviewed data from Ohio, where fentanyl use was followed by carfentanil, then other drugs like crystal meth.

"I think we're girding for that here and seeing that already to some extent, but I think we're on the forefront of harm related to this," he said.

"I think British Columbia really is the tip of the spear."