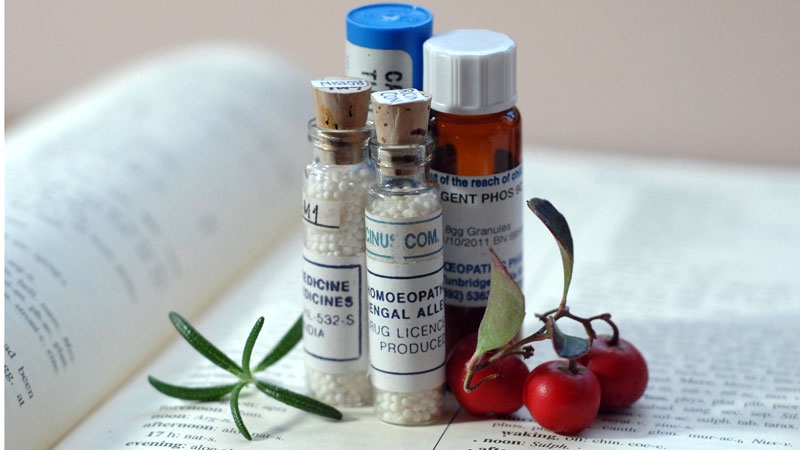 A collection of homeopathic treatments, including preparations made with robinia, castor bean, silver phosphate, and clippings of Wintergreen and rosemary. (AP / Josh Reynolds)

Ottawa's support of Terre Sans Frontieres had been criticized by doctors and academics claiming homeopathic therapies are no better than placebos for treating patients. Terre Sans Frontieres, whose head office is located just south of Montreal, has received about $200,000 of federal funding for homeopathy programs in Honduras since 2015.

Louis Belanger, spokesman for International Development Minister Maryam Monsef, said the five-year funding package was signed by the previous Conservative government. He said in an email that homeopathy "doesn't fall under the priorities" of the Liberals' international assistance policy, introduced in 2017.

"I am unclear why the Conservatives would (sign) off on this five-year program back in 2015 .... We will not be funding these types of initiatives any longer," Belanger said.

Homeopathy dates back to 1796, and is based on the principle that "like cures like," or the idea that a disease can be cured by ingesting a low dose of something that produces similar symptoms in a healthy person. The medical establishment considers it a pseudo-science. In the United States, the National Institutes of Health state, "there is little evidence to support homeopathy as an effective treatment."

Chris Giorshev, a Barrie, Ont. doctor and head of the Ontario Medical Association section on chronic pain, said a homeopathic treatment is so diluted that it is "literally water with no active ingredient," adding "there is no benefit over just a placebo."

Terre Sans Frontieres did not respond to repeated requests for comment. The group states on its website that its homeopathy services in Honduras are used to treat mosquito-transmitted viruses such as dengue and other "seasonal illnesses."

The organization's Facebook page for its homeopathy project in Honduras includes testimonials from workers who claim to be making a difference in the developing country. A March 2017 post by Carla Marcelis, the project's team leader, said her "most touching case" involved a young girl with a "serious parasitic infection" acquired by an insect bite.

"When we saw her in November, she was a very sick little girl," Marcelis wrote. "With pleasure we saw this time how much she has improved. She is still having signs of the parasite, but she is basically healthy and energetic like any girl her age."

Marcelis said that since her group began working in Honduras, homeopathy has grown in popularity. In April 2017, she described how the mayor of a town where they had established a dispensary had "added homeopathy as a safer and cheaper option for the population, and many of the people who came want to come off their medication." In an earlier post she said a Honduras university wants to teach homeopathy to pharmacy students.

He lauded the government's decision to stop funding the program. "I think it's a reasonable, well-thought-out response not to renew funding," he said.