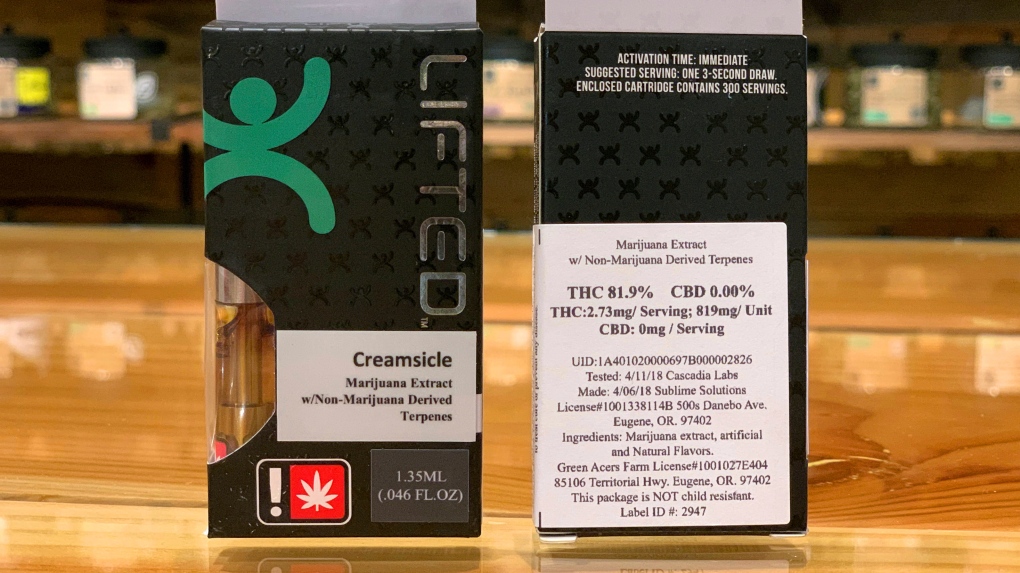 The move came after the agency that regulates Oregon's cannabis industry told The Associated Press on Wednesday that it will soon begin asking retailers to voluntarily review their vaping offerings and pull those that spark concern.

Kind Leaf Pendleton, a pot retailer with the largest inventory in Oregon, said it has already pulled 68 vaping products from 15 brands amid uncertainty over what is causing the lung-related illnesses.

"What would really hurt is having someone purchase a product and die from vaping," said Erin Purchase, director of operations at Kind Leaf. "Safety is priority here."

California-based Berkeley Patients Group, the oldest medical dispensary in the country, also said it is contacting all its vendors to ensure products are additive free.

U.S. health officials said Thursday that there are 380 confirmed and probable cases of vaping-related breathing illnesses in 36 states and one territory, including six deaths.

Amid a rampant black market in illicit marijuana vapes, a death in Oregon in July is the only one that public health authorities have linked to a purchase at a legal cannabis retailer. Authorities have not released further details about that case.

After extensive testing, New York investigators have focused on vitamin E acetate, which recently has been used as a thickener, particularly in black market vape cartridges.

Suppliers say it dilutes vape oils without making them look watery. Vitamin E is safe as a vitamin pill or to use on the skin but inhaling oily vitamin E droplets can trigger pneumonia.

Officials in New York have subpoenaed three of the biggest thickener manufacturers.

Kind Leaf said it identified all products on its shelves that listed "non-cannabis derived terpenes and artificial and natural flavours" on the label without specifying the ingredients in those additives.

Terpenes are the building blocks that give a plant its aroma and flavour, such as lavender or tea tree oil. Some cannabis oil manufacturers add terpenes from other plants to their products for consistency and cost effectiveness.

When Kind Leaf tracked down the companies that sold non-marijuana terpenes to makers of vape pens, they noticed that some of them also make and sell the so-called cutting agents, or thickeners, which have come under scrutiny.

"We can't prove that those products are not in these vape pens because we're retailers, not processors," Purchase said. "They're allowed to have trade secrets and proprietary information so we just felt uncomfortable. It's unsettling."

Oregon Liquor Control Commission executive director Steve Marks told the AP on Wednesday that his agency does not test marijuana vapes sold in state-licensed stores for additives. No marijuana oil manufacturer licensed by the state has listed vitamin E acetate as an ingredient, which would trigger a safety review, he said.

Any company that has added an "undisclosed agent" to its vape cartridges should tell regulators immediately or face "legal complications and probably additional liabilities," he said.

"My worry is that some of these folks may have gone around and put vitamin E in their products that we are unaware of," Marks said. "If it's in our products, it's out there and we don't have a clear way to know which ones it may or may not be in."