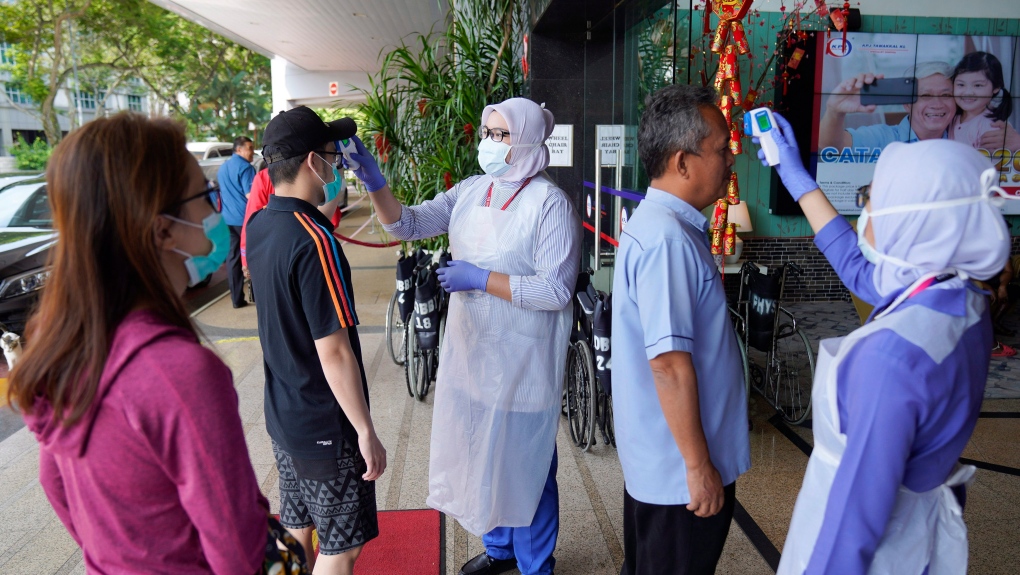 In this Feb. 5, 2020, file photo, nurses check the temperatures of visitors as part of the coronavirus screening procedure at a hospital in Kuala Lumpur, Malaysia. (AP Photo/Vincent Thian, File)

OTTAWA -- The Canadian Federation of Nurses Unions is warning that the federal public health agency's guidelines to protect front-line health-care workers from outbreaks of diseases like the novel coronavirus don't go far enough, and might be putting them and patients at risk.

The standards, which the Public Health Agency of Canada updated last week, lay out the precautions health-care workers should take when assessing and treating a patient with a possible case of the coronavirus, including what protective equipment should be used.

The public health agency has committed to updating the guidelines as they learn more about the disease the World Health Organization has named COVID-19, which has sickened more than 64,000 people worldwide.

Linda Silas, president of the labour organization, says the safety protocols are inadequate compared to those in Ontario and some other countries.

Silas said the standards assume the coronavirus can't spread through the air -- rather than through droplets -- but she contends the science isn't settled on that front and the government should be taking greater care until they can be 100 per cent sure.

"When we do not know, we have to go for the best precautions for workers," said Silas.

Nurses, doctors and other medical staff who come into contact with patients must be protected, not only for their own health but to stop the potential spread of the virus, she said.

"We need to make it clear that if health care workers are not safe, then patients are not safe," said Silas, who has written to federal Health Minister Patty Hajdu about her concerns.

The Ontario government released its own guidelines calling for constant use of disposable respirators when interacting with a potential coronavirus patient, while the federal guidelines require only a surgical mask unless certain medical procedures are being done.

The federal protocols are in line with the World Health Organization, but the U.S. Centers for Disease Control and its European counterpart have also recommended higher standards and a greater degree of precaution.

"In Canada the protection is much lower, and we will not accept that," Silas said.

She recommends all health care workers, regardless of where they are, follow the CDC or Ontario standards rather than the federal ones.

Other provinces are still developing their own protocols to respond to a potential coronavirus outbreak in Canada while others, like Manitoba, have opted to rely on the federal recommendations, leaving some health-care providers more protected than others, Silas said.

Theresa Tam, chief public health officer at the Public Health Agency of Canada, said on Saturday there are eight people in Canada who have tested positive for the virus, following news on Friday that a new case was discovered in British Columbia.

There have been three cases in Ontario and five in B.C., pending confirmation of the latest case by a laboratory.

The Public Health Agency of Canada was created in the wake of the SARS outbreak in 2003.

Mario Possamai, the former senior adviser on occupational health and safety matters for the SARS Commission, a judicial inquiry into how Ontario handled the deadly outbreak, said the federal public health agency is failing to learn from the experience of the province.

Nearly half of the 247 cases in Ontario affected nurses, physicians, respiratory therapists, cleaners or other front-line workers.

"The SARS outbreak was 17 years ago, and I can't believe they haven't learned," he said.

The final report of the SARS inquiry described a tale of two cities -- Vancouver and Toronto -- with afflicted patients arriving at hospital within hours of one another.

The Vancouver patient was put into isolation within two-and-a-half hours of being admitted and treated by health-care professionals with respiratory protection.

In contrast, a similar patient in Toronto wasn't isolated for 21 hours, and doctors wouldn't start wearing respirators for weeks.

The report concluded that the procedures in place helped to save British Columbia from a major outbreak, while Ontario was thrown into a full public health crisis.

Millions of dollars have been dispatched by governments around the world so global researchers can answer some of the lingering questions about the coronavirus, but until the science is settled lives could be saved by preparing for the worst-case scenario, Possamai said.

"That's why I'm so passionate about this, and so concerned," he said.

This report by The Canadian Press was first published Feb. 16, 2020.

Americans who left cruise trade one quarantine for another

All Wuhan evacuees under quarantine at Canadian military base healthy, no virus symptoms