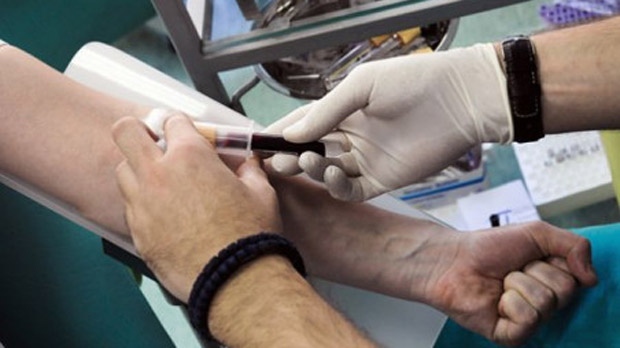 Scientists unveiled a test Monday for detecting pancreatic cancer, one of the deadliest forms, in less than a drop of blood.

The diagnostic method is fast, cheap and ultra-sensitive, and can be adapted to test for other diseases whose fingerprints are detectible in blood, they wrote in the journal Nature Biomedical Engineering.

A team in the United States and China identified a protein dubbed EphA2 found in pancreatic tumours.

They then developed a test to detect its presence in as little as 0.001 millilitres of blood plasma -- the liquid component of blood, in which the cells are suspended.

Cancer of the pancreas is a particularly aggressive type. Symptoms generally appear at a very late stage, which means diagnosis happens only after the cancer has already spread to other organs.

In the absence of an effective treatment, some 80 per cent of people die within a year of diagnosis.

Existing tests to detect cancer markers in blood require large samples, and are time-consuming and costly, the researchers said.

In a pilot study, the new test was correct more than 85 per cent of the time in distinguishing pancreatic cancer patients from healthy people and people suffering from pancreatitis -- a non-cancerous inflammation.

This was more accurate than existing plasma tests, wrote the team.

The results need to be validated in larger studies, but the discovery "has the potential to improve the early detection, treatment and monitoring of pancreatic cancer and of other cancers and infections," said a Nature media summary.

According to Hu, licensing of the test may take two or three years.

In a study in the sister journal Nature Biomedical Engineering, researchers announced a breakthrough in diagnosing brain tumours with a portable scanner.

Usually after a tumour is removed, it has to be frozen, stained and then examined in a pathology lab. Only then can the surgeon measure the operation's success and the patient's prognosis.

Analysis may require anything from tens of minutes to hours, said a Nature statement.

Now, U.S.-based scientists have developed a portable system "to provide fast analysis of fresh brain tumour samples in the operating room," it said.

It uses Raman spectroscopy, which recognises the telltale fingerprints of different molecules.

The images obtained closely resemble those of the traditional, stained samples, and can be used to classify tumours with a similar level of accuracy, said the researchers.

Further research is needed to determine how effective the technology would be in a real operating room.