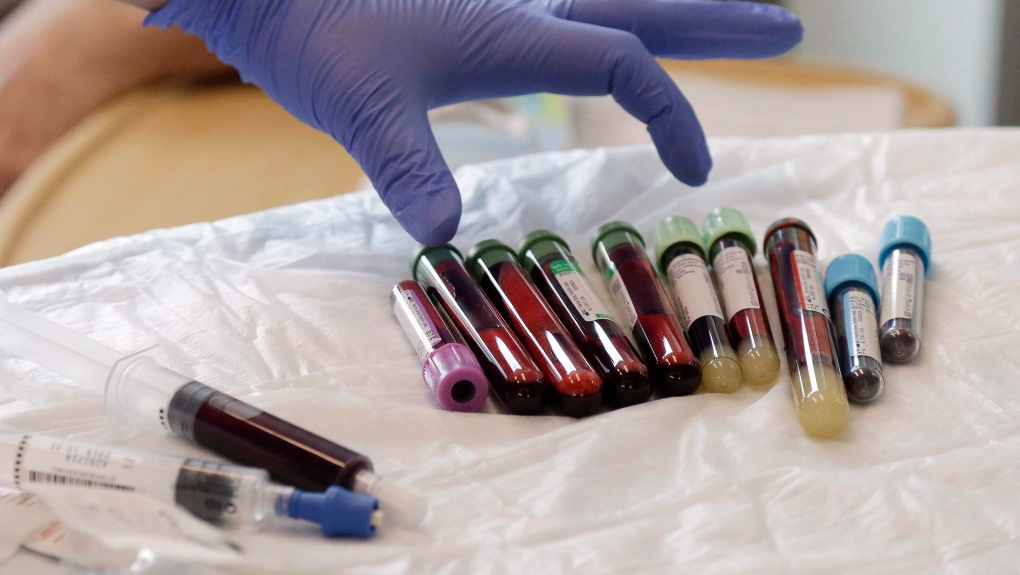 In this photo taken March 21, 2017, a nurse reaches for blood samples taken from a patient receiving a kind of immunotherapy known as CAR-T cell therapy at the Fred Hutchinson Cancer Research Center in Seattle. (AP Photo/Elaine Thompson)

TORONTO -- A newly discovered type of T-cell receptor (TCR) appears to be able to distinguish between cancerous and healthy cells, potentially leading to a "one-size-fits-all" cancer therapy, researchers say.

A study outlining the breakthrough, which could revolutionize how cancer is treated, was published Monday in the journal Nature Immunology.

T-cell therapy has exploded onto the cancer treatment scene in recent years through the increasingly popular CAR-T treatments. In CAR-T, T-cells are removed from a patient's blood, modified to recognize cancer cells, and returned to the body to kill the cancer.

Researchers say the newly detected TCR could improve this process because it is able to recognize MR1, a molecule that is universally present in both cancerous and benign cells, but somehow only kill the malignant versions of it.

CAR-T, by contrast, scans for specific parts of proteins that can vary wildly from person to person, meaning each treatment must be specifically targeted to each patient – and scientists have yet to find effective CAR-T treatments for many common cancers, including solid tumours.

"We hope this new TCR may provide us with a different route to target and destroy a wide range of cancers in all individuals," lead author Andrew Sewell said in a press release.

The work was led by Sewell's team from Cardiff University in the U.K. but also involved American, Australian and Danish researchers.

They say lab tests have shown that therapy involving the new TCR can destroy cells associated with cancer of the lung, skin, blood, colon, breast, bone, prostate, ovaries, kidney and cervix, while bypassing healthy cells that contain the same MR1 molecule. These tests were conducted on mice with human cancers and human immune systems – the same scenario that led to the widespread acceptance of CAR-T therapy.

There are still questions to be answered, including exactly how these TCRs are able to distinguish between cancerous cells and benign ones. Still, Sewell described it as "an exciting new frontier" for cancer treatment and said it might only be a few years before human patients can be treated in this way.

"It raises the prospect of a 'one-size-fits-all' cancer treatment; a single type of T-cell that could be capable of destroying many different types of cancers across the population," he said.

"Previously nobody believed this could be possible."