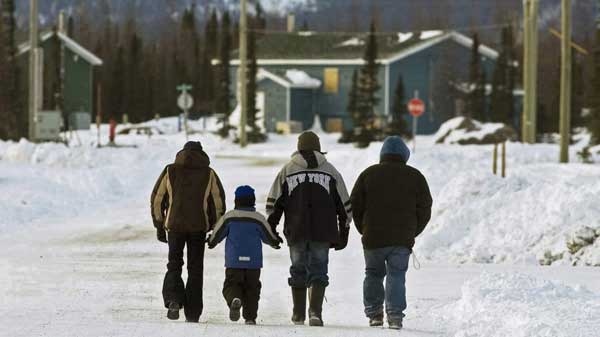 NATUASHISH, N.L. -- Fifteen years after the Innu of Davis Inlet were moved to a fresh start in nearby Natuashish, leaders are once again fighting to keep kids as young as 11 from sniffing gas.

"They're doing it right on the street," said Simeon Tshakapesh, deputy grand chief of the Innu Nation in Labrador.

He took a late-night walk three days after a fire May 8 at an abandoned house known for gas-sniffing injured two boys who, according to police, were 11 and 17.

The younger victim was flown to Toronto for treatment while the other was sent to hospital in St. John's, Tshakapesh said. RCMP described both their injuries as serious.

Tshakapesh wanted to see for himself what he calls a "solvent abuse epidemic" in the remote coastal community of 1,000 residents.

He figures about 20 people -- some adults, several teenagers and some kids as young as 11 -- are getting high on gasoline in plastic bags.

The fire conjured old headlines back in 1993. Video recordings of kids at Davis Inlet sniffing gas and yelling that they wanted to die made international news. Media reports beamed images of decrepit housing without running water.

Almost a decade later, the federal government helped relocate residents to new homes in nearby Natuashish.

Tshakapesh said alcohol continues to flow in the officially "dry" community. He also described a range of street drugs from pot to cocaine.

Similar problems plague other small towns and big cities across Canada, he added.

The Mushuau Innu people who lived off the land for thousands of years are still struggling with white ways forced on them over the last century, the deputy chief said.

"We're stuck in two worlds," he said from Natuashish. "We have TVs, satellites, cell phones, the Internet, Facebook.

"The Mushuau Innu came out of the bush not even 50 years ago. We were a nomadic people."

Tshakapesh said one of his own children struggles with solvent abuse.

"There's a lot of peer pressure and I understand that, living in an isolated community."

About 60 people, including leaders and residents, met for four hours Friday to discuss solutions, Tshakapesh said. They include plans for more night patrols, prevention programs, summer camp and maybe a small theatre space or teen recreation centre where bored kids can gather.

There are hopes the province will soon hire a full-time mental health therapist, Tshakapesh said.

He and other leaders are painfully aware of comments on social media asking: "Where are the parents?"

"When the parents are having their own personal problems, it affects our children," Tshakapesh said.

The provincial government says it's working with Innu leaders to increase support services.

"The health and well-being of children and youth depends upon a safe, secure and nurturing environment at home and in the community," spokeswoman Krista Dalton said in an e-mailed statement.

"We are committed to continuing our efforts to collectively find solutions to these complex and critically important issues."

There are no pat answers or quick fixes, says a now-retired St. John's lawyer who has lived in Natuashish since 2010.

Garry O'Brien also served as Mushuau Innu band manager for more than two years. He wrote a letter to the editor in 2013, arguing that "essentially all the present problems of the Innu are of our making, however well-intentioned our society may have been."

He described how the rampant dejection seen in the confines of Natuashish evaporated as Innu led him and his wife in 2011 on a 180-kilometre snowmobile trip. Their lives were in the hands of their guides.

"In our ordinary dealings with them as nurse practitioner and lawyer we were the ones with the expertise. It must always be remembered that all humans require dignity and as such we seek it in the feedback received from our day to day activities.

"The ancient Innu way supplied the Innu with all the dignity they required. When the Innu were no longer free to live the old way, they lost nearly all of their sources of self-respect or human dignity."

O'Brien suggested the way forward is through celebrating and urging Innu youth to get educated in "the white man's ways," while still revering their own traditions.

Tshakapesh agreed that, above all, young people must know and respect where they come from.

"We are Innu. We cannot be healthy or successful in life without understanding and embracing our culture, our language and our connection with our land and animals."

Tshakapesh said addiction prevention is ideal but aboriginal groups -- Innu, Inuit and Metis -- must also collaborate to build a multi-treatment youth centre in Labrador. He fears that the scourge of potent, deadly drugs such as fentanyl is still to come.

"We need to get ready. If not, we're going to be in really dire straits 10 years from now."