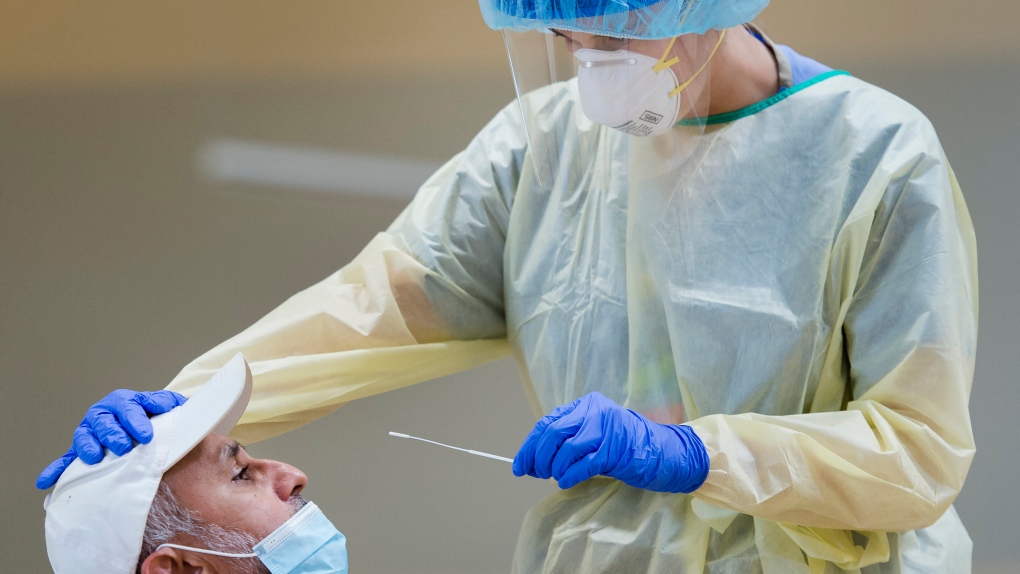 Friaaz Azeez gets tested for COVID-19 from a health care worker at a pop-up testing centre at the Islamic Institute of Toronto during the COVID-19 pandemic in Scarborough, Ont., on Friday, May 29, 2020. THE CANADIAN PRESS/Nathan Denette

VANCOUVER -- Health-care workers in Canada made up about 20 per cent of COVID-19 infections as of late July, a figure that was higher than the global average.

In a report released earlier this month, the Canadian Institute for Health Information said 19.4 per cent of those who tested positive for the virus as of July 23 were health-care workers. Twelve health care workers, nine from Ontario and three from Quebec, died from COVID-19, it said.

The World Health Organization said in July that health-care workers made up 10 per cent of global COVID-19 infections.

A national federation of nurses' unions blames the infection rate on a slow response to the pandemic, a shortage of labour and a lack of personal protective equipment.

Mahi Etminan, a registered oncology nurse who was working at a hospital in Vancouver in mid-March, says she doesn't know how she was infected by COVID-19.

"It could have been anywhere in the hospital," she said.

"In March, we weren't required to really wear any masks or anything."

Etminan said she has tested negative for the virus twice but still feels the after-effects of her illness. She tires easily, has lost her sense of taste -- even salt -- and is losing chunks of her hair.

She agrees with the Canadian Federation of Nurses Unions that proper precautions weren't put in place to deal with COVID-19.

"I think we were behind in putting a proper protocol in place," Etminan said.

Linda Silas, president of the 200,000-member nurses' federation, said Canadian hospitals approached COVID-19 based on the findings of a 2003 Ontario government commission into SARS.

"I thought we were ready," Silas said in an interview.

"And then mid-March, early March, we realized how unready we were. And that's one of the reasons that we have one of the highest levels of health-care workers getting infected."

She said with the routes of transmission for the virus being uncertain -- and later research showing it was possible the virus could be airborne -- it was critical that health care workers get full protection.

The Ontario government convened the commission to investigate the origin, spread and response to SARS. One of the key recommendations of the report was improving the safety of health-care workers.

Ontario Health Ministry spokesman David Jensen said lessons learned from SARS have been implemented, including giving more powers to the chief medical officer of health to issue directives to workers and organizations.

The province recommends health-care workers use appropriate precautions when conducting clinical assessments, testing and caring for patients who are suspected or confirmed to have COVID-19, he said.

The approach to the novel coronavirus was taken on a precautionary basis because little information was available about its transmission and clinical severity, Jensen said in an email response to questions.

"The majority of cases are linked to person-to-person transmission through close direct contact with someone who has COVID-19. There is no evidence that COVID-19 is transmitted through the airborne route."

The World Health Organization acknowledged in July the possibility that COVID-19 might be spread in the air under certain conditions.

It said those most at risk from airborne spread are doctors and nurses who perform specialized procedures, such as inserting a breathing tube or putting patients on a ventilator.

"There's been a little bit of an evolution in our understanding of the transmission," he said, adding there was evidence as early as March that showed the virus can be transmitted via air.

While early on more attention was paid to surface transmission, it now seems as though the airborne route is more prominent, he said.

Health Canada spokeswoman Tammy Jarbeau said long-term care facilities and retirement homes were among the hardest hit during the peak of COVID-19 in the spring, likely affecting health-care workers.

The federal government is working with the Canadian Institute for Health Information to better understand the virus, including expanding case data for health-care workers.

The Quebec government said the high rate of community contamination in the province coupled with a labour shortage at the beginning of the pandemic affected health-care workers who were working in several long-term care homes to maintain essential services.

"In recent months, Quebec has gone through an unprecedented health crisis," said Robert Maranda, a spokesman for the ministry of health and social services.

The plan to deal with COVID-19 was based mainly on the experience gleaned from the 2009 swine flu pandemic, he said.

"However, H1N1 influenza is not the same virus that we are currently fighting against," Maranda said.

"A person with COVID-19 can transmit the virus without having any symptoms, which is not the case with the flu."

But as more is known about the new coronavirus, he said the province's response has changed, including no longer allowing health-care workers to work in different places.

Silas said the nurses' federation has started an investigation led by a former senior adviser to the SARS commission into why Canada didn't better protect health-care workers from COVID-19. The report is expected later this year.

The Public Health Agency has done a poor job of gathering data about health-care workers infected with COVID-19, she said, adding that the federation has relied on data collected by Statistics Canada.

Natalie Mohamed, a spokeswoman for the Public Health Agency, said 25 per cent of all reported cases were among people who describe themselves as working in health care and it has been collecting data from the provinces and territories since March.

Those who identify themselves as health-care workers include physicians, nurses, dentists, physiotherapists, residential home workers, cleaners, janitorial staff and volunteers.

Some health-care workers may also be getting infected outside work, Mohamed said, although exposure data is incomplete.

The associate executive director of the Canadian Medical Protective Association, which provides advice and assistance in medical-legal matters to doctors, said it began fielding concerns from members about a lack of protective equipment when the virus started spreading.

Dr. Todd Watkins said the questions have shifted to how things will be handled in the future.

"Will there be a second wave and how am I going to respond to that? Is my clinic prepared for that? Will there be appropriate protective gear?"

Christine Nielsen, chief executive officer of the Canadian Society for Medical Laboratory Science, said the flow of information is affected by the fact the provinces and territories deliver health care and they could collect data differently.

"There's room for improvement with how public health has responded," she said. "Just the scale of the pandemic has really caught everyone off guard."

This report by The Canadian Press was first published on Sept. 19, 2020.