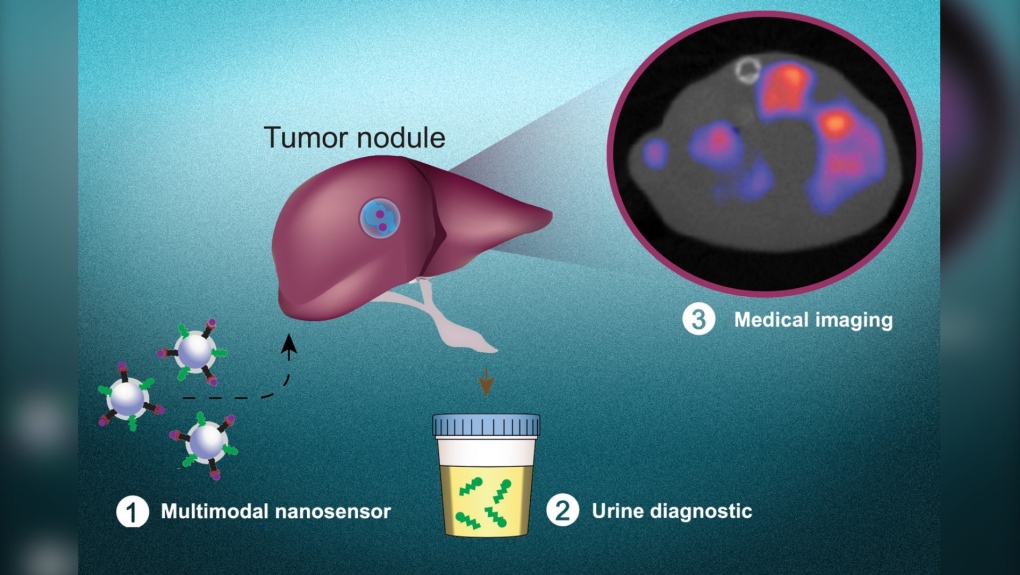 Multimodal nanosensors (1) are engineered to target and respond to hallmarks in the tumor microenvironment. The nanosensors provide both a noninvasive urinary monitoring tool (2) and an on-demand medical imaging agent (3) to localize tumor metastasis and assess response to therapy. (Liangliang Hao)

TORONTO -- In the future, we may not have to rely on only imaging tests to locate tumours — instead, we could detect some tumours using diagnostic nanoparticles and urine, according to new research out of the Massachusetts Institute of Technology (MIT).

Engineers at MIT have created a nanoparticle that can reveal whether there are cancerous proteins in a body using biomarkers identifiable in a urine test. According to a press release, these nanoparticles can also pinpoint where in a person’s body the tumour is, something that could be helpful if a tumour has shifted and spread to more regions of the body, a process called metastasizing.

“This is a really broad sensor intended to respond to both primary tumors and their metastases,” Sangeeta Bhatia, a professor at MIT and a member of the school’s Koch Institute for Integrative Cancer Research and Institute for Medical Engineering and Science, said in the release.

“It can trigger a urinary signal and also allow us to visualize where the tumors are.”

The technology is still in the early stages. In a paper published last week in the journal Nature Materials, Bhatia and other researchers tested the diagnostics in mouse models of colorectal cancer, looking at how the progress of cancer could be tacked using this method.

The idea is that one day, this could be a regular part of cancer testing that could be integrated into annual checkups.

The synthetic biomarkers that can be detected in urine have been in development for years by Bhatia. They work by interacting with a specific enzyme expressed by cancer cells.

In order for a tumour to form, the cancer cells have to invade surrounding tissue, something most cancer cells achieve by producing enzymes called proteases, which break proteins down into amino acids. Although proteases exist in the body elsewhere — such as in the digestive system — they are part of carefully modulated systems, while in malignant tumours, the unchecked production of proteases can help the tumour spread by breaking down structural parts of other cells.

How Bhatia’s diagnostic nanoparticles work to detect tumours is that they are covered with peptides — a chain of amino acids a little too short to be a protein — which split when they encounter the proteases produced by cancer cells. The peptides then leave the body in the urine, serving as biomarkers to signify the presence of a tumour.

The new development is figuring out how to make it so these nanoparticles can include the location information of tumours as well.

Researchers added a “radioactive tracer called copper-64” to the nanoparticles, and then changed the peptide the nanoparticles are coated with to a peptide that is attracted specifically to acidic environments, which would help them congregate at tumours faster.

Some of the peptides are then left at the tumour, leaving a signal for imaging. This is similar to a common strategy called PET imaging, which is a nuclear medicine imaging test that uses a radioactive form of glucose injected into the body as a tracer to create images of how the body’s cells are functioning.

In this new research, they specifically tested the nanoparticles in two mouse models. After the mice received chemotherapy to treat the colon cancer they had, researchers successfully used both the urinary test and the imaging trace left by the nanoparticles to track the cancer as it shifted in the body.

Researchers believe this method may be more effective than PET imaging, because it picks up on weaker signals from tumours in the lung that are sometimes overshadowed in regular PET imaging.

“Using acid-sensitive nanoparticles to accumulate Copper-64 in the tumor environment provides a much clearer image of lung tumors,” the release stated.

Bhatia is optimistic that if this strategy progresses to use in humans, it could prove helpful for monitoring cancer progression, and also keeping an eye out for recurrence of cancer.

“Those patients could be monitored with the urinary version of the test every six months, for instance,” Bhatia said. “If the urine test is positive, they could follow up with a radioactive version of the same agent for an imaging study that could indicate where the disease had spread. We also believe the regulatory path may be accelerated with both modes of testing leveraging a single formulation.”

If used in general screening, it could feasibly be cheaper than some of the current alternatives, and help with early detection — something that could be crucial for treating patients.

“The vision is that you could use this in a screening paradigm — alone or in conjunction with other tests — and we could collectively reach patients that do not have access to costly screening infrastructure today,” she says. “Every year you could get a urine test as part of a general check-up. You would do an imaging study only if the urine test turns positive to then find out where the signal is coming from. We have a lot more work to do on the science to get there, but that's where we would like to go in the long run.”

An earlier version of the nanoparticles have been tested in phase 1 clinical trials in humans by Glympse Bio, a company co-founded by Bhatia, and were found to be safe — but research is continuing to discover more.