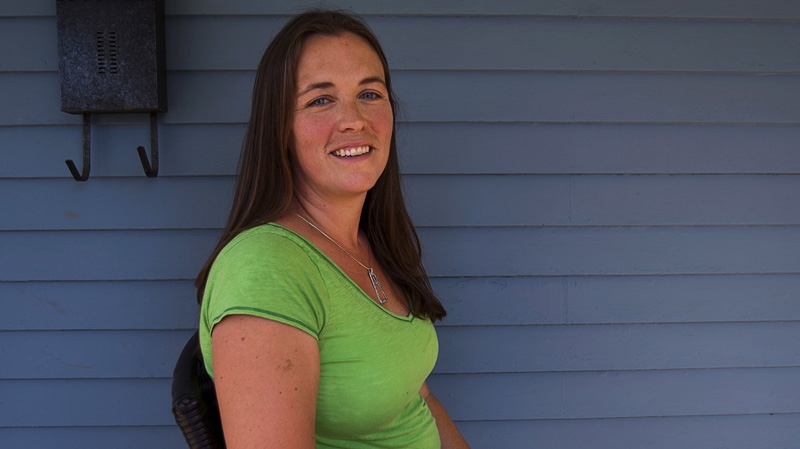 Dawn Hare is seen at home in Kentville, N.S., on Saturday, August 4, 2012. (THE CANADIAN PRESS/Andrew Vaughan)

HALIFAX -- Shannon MacDonald wanted her baby to be born at home in the Cape Breton Highlands. But she delivered her child in Ottawa instead over what she says is Nova Scotia's lack of progress on midwifery.

"I wanted my daughter's birth story to be based in my community so her origin would be there and she would always feel connected to our history," MacDonald said in an email from Sweden where she is currently.

She said her decision to have her daughter born in Ottawa in November 2011 was "incredibly sad" but necessary after the province passed legislation in 2009 that she believes restricts access to home birth.

The legislation, which regulated midwifery in the province, allows women to choose if they want to give birth at home and whether they want their primary care provider to be a doctor, midwife or obstetrician.

But three years later most still don't have that choice, say critics of the province's midwifery program.

"Requests for midwifery care are likely to quickly exceed the available capacity," the report said.

It recommended the hiring of 20 full-time midwifery positions by 2017. The province now has six registered midwives.

That stands in stark contrast to the roughly 1,100 midwives in the country, according to the Canadian Association of Midwives.

Leslie Niblett, a midwife at the South Shore Regional Hospital in Bridgewater, N.S., said regulation was a positive step but more needs to be done to boost the number of midwives in the province.

"We need to be on call 24 hours a day, seven days a week in order to be able to provide to all the clients that want and need (home birth)," said Niblett, who works

Unlike their counterparts in the three assigned health districts, their services aren't covered by the province and they must pay for their own malpractice insurance.

But the Nova Scotia government says it's not feasible to fund such costs across the province.

"We're not able to cover the insurance costs of a private practitioner," said Paula English, the chief of programs, standards and equality with province's Health Department.

"So that has been a deterrent to some practitioners but ... many areas of insurance were explored and we landed on the option we felt was best for Nova Scotia."

Dawn Hare delivered her two children with a midwife prior to Nova Scotia's legislation and is now a member of Valley Families for Midwifery, a group pushing for the return of midwifery to the province's Annapolis Valley.

"The focus right now of the government is with the three model sites and we understand that but we do need some sort of plan for the rest of the province," Hare said.

A plan is coming, English said, adding that the provincial government is focusing on stabilizing existing midwifery services before it decides on when and how to roll out the program elsewhere.

"What we've been doing is working with the provincial and district partners to identify where are the communities within the (Halifax Regional Municipality) where women would most benefit from midwifery care," she said.

"We really want to make sure we get at the underserved and the priority populations."

She said part of the government's plan includes hiring a midwifery practice specialist by early September who would be in charge of helping recommend how the province moves forward.

But MacDonald said midwifery should be implemented provincewide as it has been in most other provinces because it helps cut costs.

"It seems so strange to want to reinvent the wheel," said MacDonald, herself a midwife. "The Canadian model is cherished by women nationwide and there is good quality research supporting the efficacy and quality of Canadian midwifery care."

The IWK Health Centre in Halifax shuttered its program in December 2010 for more than a year due to a lack of midwives. It now employs two midwives, but the hospital's vice-president of patient care said that isn't enough to offer home births.

"We're not where we'd like to be," Jocelyn Vine said.

"It's really all about recruitment and we have been getting applicants and have been completing interviews, so I'm very optimistic about progress."

The need for more midwives is not just felt in Nova Scotia, the Canadian Association of Midwives says.

In many provinces and territories, clinics have stopped advertising their midwifery services because they can't keep up with demand, said Tonia Occhionero, the association's executive director.

"As the profession is becoming more well-known, as the public is getting more knowledgeable about the services of midwifery ... the demand is going up," Occhionero said.

In Ontario, which has the largest number of midwives in the country, 40 per cent of all women trying to access midwifery aren't able to, the association says. In Manitoba and Saskatchewan, that figure is 75 per cent.

MacDonald said she doesn't know if she'll return to Cape Breton, but she stands by her decision to leave the province to have a home birth.

"My midwives let me have space to birth my own darn baby," she said.

"That is the story I will tell (until) the end of my days, not one with 15 vaginal exams, an external fetal monitor, prophylactic IV fluids, bright lights, restricted food intake and a giant light on my crotch."